The Earth’s atmosphere has had no net warming for more than 18 years now according to RSS satellite data. 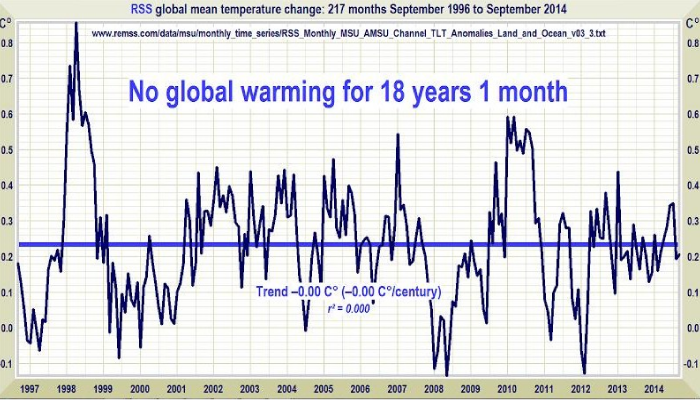 This fact has caused problems for global warming alarmists. They have claimed that the “missing heat” is hiding in the deep oceans and will some day jump out and get us. I covered that subject in two posts last October:

A new study from NASA says the heat is NOT in the deep oceans. According to the press release from the Jet Propulsion Laboratory:

The cold waters of Earth’s deep ocean have not warmed measurably since 2005, according to a new NASA study, leaving unsolved the mystery of why global warming appears to have slowed in recent years.

Scientists at the Lawrence Livermore National Laboratory, however, are now claiming the missing heat is now hiding in the upper 700 meters of the southern oceans and that they have merely underestimated the heat in the southern oceans before. See post by Anthony Watts here.

You will see on the first graph in Watt’s post, the southern oceans have been cooling. But the Livermore press release says, “Using satellite observations and a large suite of climate models, Lawrence Livermore scientists have found that long-term ocean warming in the upper 700 meters of Southern Hemisphere oceans has likely been underestimated.” I notice that the Livermore scientists don’t use actual measurements in the ocean. That might scare away the elusive “missing heat.”

Another curious phenomenon: if carbon dioxide emissions are warming the planet, how could all that warming be hiding in just the southern hemisphere? Should not global warming be global?

It seems that the “missing heat” is a wily beast that resides wherever we are not looking and disappears when we look.