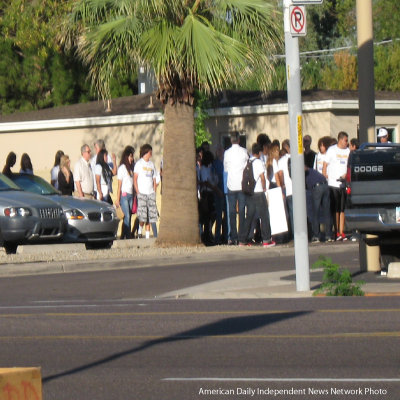 A group of little over 20 school aged minors and retirees accompanied Arizona activist Randy Parraz in his late afternoon visit to GOP Headquarters to demand the resignation of Maricopa County Chair A.J. LaFaro. In their excitement, Parraz and his small band forgot to leave the demand letter they came to deliver to the Chairman.

True to form, Parraz, known best for his frequent political stunts, demanded an apology from LaFaro for his recent release of a video which showed a member of the group; Citizens for a Better Arizona (CBA) stuffing a receptacle, at an Arizona elections office, with handfuls of ballots.

Parraz complained that the reaction to Marin’s ballot box stuffing “from conservative bloggers and commentators has been unrelenting and cruel. Republican extremists have been circulating this video to smear the character of Mr. Marin and the credibility and work of CBA.”

Parraz takes exception to LaFaro’s characterization of Marin’s behavior as Mr. Marin has been referred to as a “vulgar,” and “disrespectful,” with “no respect for our laws.” Marin now denies telling LaFaro to “Go F*** yourself” and “f*** off gringo.”

In response LaFaro is challenging Marin to take a lie detector test.

LaFaro was very clear at the time he released the video that the ballot box stuffing caught on tape is legal in Arizona, and released the tape to show the need for the state to align its election process with the other 49 that do not allow Marin’s actions.

LaFaro issued a statement in response to the demand:

Today, Randy Parazz with Citizens for A Better Arizona (CBA) called for my apology and resignation as Chairman of the Maricopa County GOP due to the fact that I had the courage to expose CBA’s ballot harvesting practices to the world. Once again, Mr. Parraz is attempting to shift attention away from his group and their questionable practices while attacking a conservative.

I find CBA’s press release to be hypocritical, baseless and without merit. If anyone should be apologizing, it should be Mr. Marin to me for his vicious and vulgar verbal attack while he was stuffing a polling place receptacle with ballots.

Mr. Parraz notes that Mr. Marin is a graduate of Arizona State University with a Degree in Interdisciplinary Studies with concentrations in Communication and America History. Clearly Mr. Marin should have developed civility and better communication skills while attending the publically funded university.

I simply raised questions about ballot harvesting and whether or not Arizona, as the only state in the Union that allows this sort of questionable activity, should reconsider its laws. As a student of American History, Mr. Marin should have a greater understanding and appreciation for the sanctity of our vote and Arizona’s sovereignty.

As for Mr. Marin’s choice of words that day, I invite him to join me in taking a lie detector test to show just which one of us accurately recalls the events and words uttered of that day.

I will not be intimidated or bullied into apologizing or resigning. I stand by my convictions and courage in exposing this and asking the question “Is this voter fraud? You be the judge.” I guess another question should now be asked – “What are the Citizens for a Better Arizona (CBA) trying to hide?”

In an interview on the James T. Harris radio show, LaFaro reiterated his challenge to Marin to take a lie detector test. “I am not going to back down. I will continue to stand up for my values, my faith and the members of my Party,” said LaFaro, “we will see whose nose will grow.

“In closing, I testified at the Arizona Senate and House Hearings that created some excellent election laws and good sound public policy that were supported by the Secretary of State and all the County Recorders/Election Department that ultimately resulted in HB-2305, “ LaFaro concluded his statement. “ In 2015, I plan to testify again and hope to get those same election laws passed again and let it each one of them stand on their own merit – including one to eliminate ballot harvesting.”

One member if the GOP at the headquarters during Parraz’s questioned the apparent use of kids for the stunt. They wondered if Parraz had to wait until school let out before he could get a group big enough to make an appearance before the cameras.

Since LaFaro shared his video with the country, James O’Keefe of Project Veritas released footage in which liberal activists tout the benefits of ballot stuffing, and Arizona GOP volunteers came forward with evidence based information about ballots cast in the name of people who were deceased.