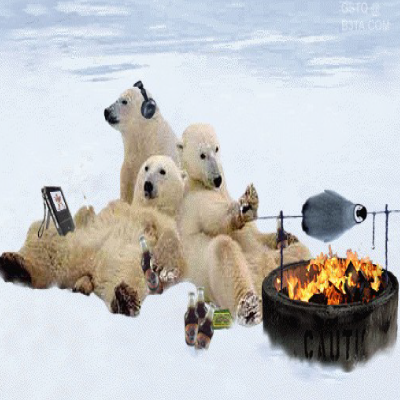 Changes in polar bear population is not unusual. In fact declines and recovery have occurred about every ten years since the 1960s due to instances of unusually thick spring ice.

That story gives the lie to “shrinking sea ice from global warming.”

The native people of the region have a different view of polar bear population. The Inuit population of Canada’s Nunavut Territory say that “Scientists do a quick study one to two weeks in a helicopter, and don’t see all the polar bears. We’re getting totally different stories about the bear numbers on a daily basis from hunters and harvesters on the ground.” The Inuit say that polar bear populations within their territory is stable and on the rise. During the last ten years, the growing population has become a real problem according to the Inuits, “families enjoying outdoor activities must be on the look-out for bears. Many locals invite along other hunters for protection.” (Source).

Doomsayers assume that polar bears cannot adapt to changing conditions, but the bears have been around for a long time, perhaps as much as 600,000 years. That means they have survived several periods warmer than now. For instance, fossil evidence shows that polar bears survived the Eemian period 125,000 years ago when it was warm enough that hippos lived where London is now. (Alaska Science Forum). Within the last 11,000 years, polar bears survived the twin peaks of the Holocene Climatic Optimum which peaked about 10,000 years ago near Alaska and between 8,500 to 5,000 years ago near Greenland. Proxy evidence shows that global temperatures were about 2.5 degrees C warmer than now in most places and up to 7 degrees C warmer in northern Russia.

Once again global warming turns out to be a phantom menace.