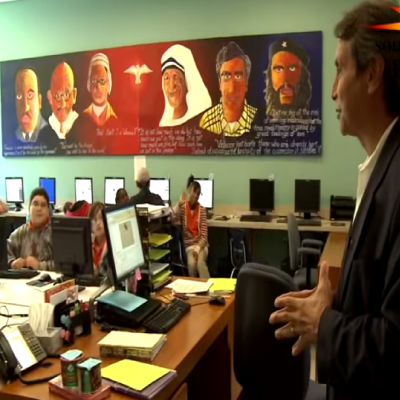 A portrait of peacemakers is hung on the wall of one of Southwest Key’s classrooms in Texas. The portrait of Che Guevara and Mother Teresa as moral equivalents leaves even the most skilled orator in awe and speechless.

A picture is worth a thousand words, and yet words cannot describe the feeling in the pit of your stomach as you begin to realize the full reach of Southwest Key and what they bring into the lives of so many disenfranchised children.

The Austin, Texas based company, led by El Presidente Dr. Juan Sánchez, claims to be the largest provider of services to unaccompanied children in the United States. According to the Southwest Key website, they operate “68 juvenile justice and family programs, safe shelters for immigrant children, schools, and community building initiatives.”

They claim that over 200,000 kids and their families receive services annually in Texas, California, New York, Georgia, Arizona, and Wisconsin.

Those facilities, like the newest facility in Tucson, Arizona, for Unaccompanied Alien Children, have been blanketed in silence and mystery. Because of the secrecy, there is little we know about that facility except that it has capacity of 283 beds, and is licensed by the Arizona Department of Health Services as a residential behavioral facility.

According to documents obtained by a Freedom of Information request, Southwest Key has been awarded over $120 million dollars a year since 2009 for services to UACs on top of what they receive for managing their juvenile justice programs.

In the last year alone, Southwest Key was awarded over $7 million for the new Tucson facility.

Funding is requested from the Services to Unaccompanied Alien Children Program, to provide shelter care services as outlined in this proposal up to 280 unaccompanied alien children referred by the Office of Refugee Resettlement, Administration for Children and Families, DHHS. Shelter care services will be provided at a short year budget from June, 29, 2014 through September 30, 2014, at an estimated cost of $7,479,210. View document here.

The $7 million covers everything from travel for executives to “multicultural crayons.”

In June of this year, Arizona’s Governor Jan Brewer expressed shock and outrage over the sudden arrival of the UACs, however a confidential source reported this spring that Brewer’s security staff was looking for properties for the arrival around the time the award of grant monies were first sought by Southwest Key.

While the arrivals may have been a surprise to the hairdresser turned governor, Southwest Key has been doing business with the State of Arizona for years. At least ten years to be more precise.

According to the Arizona Department of Education, Southwest Key has been contracting with the Department‘s Health and Nutrition Services Division, for the last 10 years.

Food cost is calculated at $8.65 per day per client. We provide three meals per day and two snacks; our food service program meets the USDA guidelines for nutritional content and serving size. This program will be contracted with the Arizona Department of Education to participate in the National School Lunch Program which will provide a reimbursement of $5.51 per day per client to cover food expenses. Southwest Key also uses a number of resources for donated food, which are used to supplement this amount and to produce additional cost savings. This item also includes the travel costs in the amount of $600 for the NSLP accountant to provide a mandatory training and monitoring of the administrative requirements for submitting claims for the National School Lunch Program specifically related to SWK Casa Tucson.

While they appear to be concerned with saving the cost of food, the grant includes $ 1,500 for pool cleaning for three months.

Southwest Key was started by Dr. Juan Sánchez, who was “shaped by his experiences as a young migrant worker,” according to the website. Sanchez, listed on the website as “El Presidente/CEO,” graduated from Harvard University with a doctorate from the School of Education.

According to Southwest Key they “provides a transformative education,” which is “culturally-relevant.”

It is difficult to imagine how “Che,” an Argentinian Marxist revolutionary, who oversaw the Castro regime’s firing squads, is culturally relevant to students from Mexico, Columbia, Honduras, and Guatemala. Even Wikipedia, not known for a right-wing slant, notes that Guevara “has evolved into a quintessential icon of various leftist-inspired movements.”

Sanchez, who learned collective responsibility “growing up in one of the poorest barrios of a South Texas border town,” according to an article in the Austin Business Journal, describes himself as a “community activist with a raised fist.” However, Sanchez is hardly a Che-style communist. He has created many lucrative social enterprises. In April of 2012, Southwest Key’s grand opening its Social Enterprise Complex — “a 14,000-square-foot center that is expected to serve thousands of individuals annually, create 160 jobs in five years and house some of Austin’s most cutting-edge workforce programs.”

Along with taking donations for food, Southwest Key runs the construction company as well as, The Blooming Florist, Café del Sol, Southwest Key Maintenance among other enterprises which “provide employment opportunities in East Austin and generate profits to sustain the nonprofit’s operations.”  Those operations earned Sanchez the distinction of being one of the Austin Business Journal ‘s “2012 Best Austin CEOs.”

As Arizona continues to sink deeper and deeper into debt at the hands of the hairdresser-turned-governor, and the Republican controlled Legislature focuses almost exclusively in the need for more charter and private schools to which they send their children, there is little wonder why the monies brought to the state by UACs is welcome and little attention is spent on the state’s children in juvenile justice programs.

According to the Austin Business Journal, “Southwest Key Programs is the fifth-largest Hispanic nonprofit in the country.” As bastions of leftist-inspired programs, Tucson and Austin are ideal locales for the services Southwest Key is selling.