Earlier this month, I reported on how Thomas R. Karl, director of the former National Climatic Data Center* of the National Oceanic and Atmospheric Administration’s (NOAA) falsely claimed that the 18-year “pause” in global warming is an illusion – just an artifact of data analysis – and that the global climate never really stopped warming. (See National Climate Data Center adjusts data to erase warming pause).

Karl et al. eliminated the pause by a statistical flimflam manipulation of surface data from their main database, the U.S. Historical Climatology Network (USHCN) and from sea surface temperature data. Karl’s contention ignores observational evidence from two satellite systems and balloon-borne radiosondes all of which show no net warming for the past 18 years.

Karl’s contention also ignores NOAA’s own data from its newer United States Climate Reference Network (USCRN). Just about one year ago I wrote about the differences in these two networks: New NOAA data show cooling trend for last 10 years. The USCRN network continues to show a lack of warming. Did Karl think nobody would look?

The USCRN stations are sited well away from urban influence (urban heat island effect). These stations use state of the art instrumentation and are therefore not subject to many of the problems associated with the old USHCN network. The difference in temperatures recorded by the two networks shows that the old USHCN instruments have been overstating the temperature anywhere from +0.5°C on average, up to almost +4.0°C (+0.9°F to +7.2°F) in some locations during the summer months.

NOAA maintains a website where you can plot their data, which I did this week. Results from the newer USCRN stations show no net warming for 11 years. In fact, the data show a net cooling from 2005 to 2015. (NOAA has not released any USCRN data prior to 2005.) I made a screen shot of the plot (just in case this site disappears). 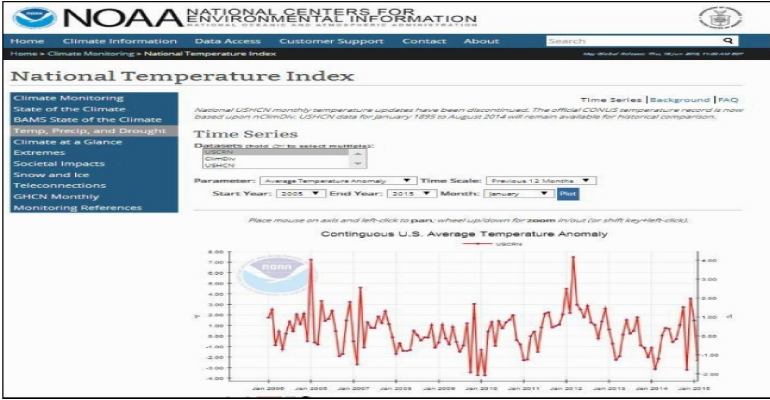 Karl’s supposed elimination of the pause in global warming received wide mention in the press, including the Arizona Daily Star, but apparently none of those journalists bothered to check the USCRN data (or they, too, ignored the data).

Anthony Watts has an article showing that Karl is very familiar with the new USCRN data but chose to ignore it because if its inconvenient results. One of the comments to that post says: “Natural laws apply everywhere in the universe except the realm of climate ‘science.’”

It is sad to see how science has been perverted by politics. It seems that many government scientists and academics who rely on government grants are finding ways to make the data conform to policy rather than shaping policy to fit the real data. I’m sure readers can think of a word which characterizes that practice.

“Simply put, the danger is not climate change – which will always be with us. The danger is energy restrictions imposed in the name of controlling Earth’s perpetually fickle climate. For developed nations, surrendering to the climate crisis industry would result in fossil fuel restrictions that kill jobs, reduce living standards, health, welfare and life spans – and put ideologically driven government bureaucrats in control of everything people make, grow, ship, eat and do. For poor countries, implementing policies to protect energy-deprived masses from computer-generated manmade climate disasters decades from now would perpetuate poverty and diseases that kill them tomorrow. Denying people their basic rights to have affordable, reliable energy, rise up out of poverty, and enjoy modern technologies and living standards would be immoral – a crime against humanity.” –Paul Driessen and Tom Tamarkin (Source)

The past is getting cooler