In November 1870, General George Stoneman, the military commander of the Arizona Territory, erected a small military camp near the base of Picket Post Mountain and began construction of a road to the proposed site of Camp Pinal, a second military post in the Pinal Mountains. Completed in April 1871, this road meandered north from Camp Picket Post on Queen Creek about three miles west of the present town site of Superior, Arizona to a point along Silver King Wash; followed Silver King wash north to a point north of its junction with Comstock Wash. There it crossed the range at “Stoneman’s Grade”, where it dropped into the upper reaches of the Queen Creek drainage before emerging just north of Oak Flat, crossing Devils Canyon and continuing east to Camp Pinal, located near the present day community of Top of the World.

However, shortly after the Camp Grant Massacre on April 30, 1871, General Stoneman was relieved of command and replaced by General George Crook, who subsequently abandoned Camp Pinal in July 1871. Over the next couple of years, through both negotiation and military actions, resistance from most of the Apache and Yavapai tribes ceased by the spring of 1873 and the Indians began to settle on their reservations.

In 1873 a soldier named Sullivan, who had been involved in the construction of the road that had become the main route between the Globe area and valleys of the Salt and Gila rivers was returning to camp one evening, when he found several heavy, black nuggets of metallic material near the base of Stoneman’s Grade. Although he knew little of minerals, he figured that he must have found something unusual. He kept the black nuggets and returned to camp without saying anything about his discovery to the other soldiers. 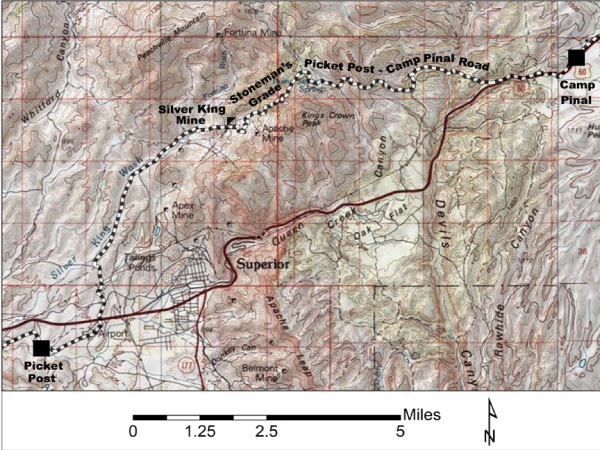 A short time later his term of service with the army expired and he ended up working for a Florence rancher named, Charles Mason. He showed Mason several of the black nuggets, who recognized them as being native silver. However, Sullivan did not return to the location of his discovery before unexpectedly leaving the Florence area a short time later.

Sullivan’s discovery sparked Mason’s interest. He organized a prospecting party to search for the source of the silver specimens in 1874. Although their initial foray into the area failed to locate the source of the nuggets, they did discover a manganese stained outcrop of a vein, which later became the Silver Queen mine.

On a later exploration foray, Benjamin Reagan, William Long, Isaac Copeland and Charles Mason were returning home from a prospecting trip to the Globe area and camped out near the base of Stoneman’s Grade. While there they found black silver nuggets that were similar to those Sullivan had showed Mason. They traced the nuggets to their source, which cropped out at the top of a small conical hill, where they staked the Silver King claim on March 22, 1875.

Within six months, 50 miners were working the site, producing very rich, hand-sorted silver ore, which assayed as much as $2,000 per ton (about 1,600 ounces of silver per ton or 5.5% silver) that could be shipped directly to a smelter without additional treatment. This direct-smelting ore was hauled by wagon to Florence, where it was treated in a small cupel-type furnace, owned by Cury and Hughes. In June 1876, a stamp mill and amalgamation plant, designed to treat lower grade ores from the Silver King mine, was erected near the former military camp at Picket Post along Queen Creek approximately five miles southwest of mine site.

The Silver King mine was sold to Comstock Nevada interests in December 1876 and the Silver King Mining Company was organized in May 1877. The cost of shipping supplies to the site were significantly lowered with the arrival of the Southern Pacific Railroad in Casa Grande from the west coast in May 1879. Picket Post was renamed Pinal City in 1879 and served as the site of Silver King’s milling operation until 1888, when the mill was relocated to the Silver King mine site in an effort to reduce costs. In spite of this, mining activities declined significantly only achieving intermittent production until operations finally ceased in 1896.

The Silver King mine was acquired by the Silver King of Arizona Mining Company in 1916. It briefly resumed limited production at end of World War I prior its final closure during the summer of 1920. Over life of this mining operation approximately 6.2 million ounces of silver were recovered.

Copyright © (2015) by David F. Briggs. Reprint is permitted only if the credit of authorship is provided and linked back to the source.