The A-10 had a “very peculiar birth, to say the least,” according to Pierre Sprey, member of the fighter mafia, and one of the designers of the famed Warthog.  The result of a promise kept and a broken system, the circumstances of the A-10’s birth are emblematic of our nation’s defense industry.

In a recent interview about the A-10, and the F-35, Sprey reveals inner workings of a corrupted system and the honorable men working within it to ensure this nation’s security. In his interview with popular Tucson, Arizona radio show host James T. Harris, Sprey, explains that the budget games played by the military services over the years, and sheds light on the reasons for the failure of the F-35.

An ethical man keeps the promise

According to Sprey, the A-10 “grew out of a desire, on the part of the Air Force, not to simply attack Soviet tanks, and have a close support airplane, but to attack an Army helicopter.  Because nothing drives the services more than the battle for budget, and so the real threat when the A-10 was born was an Army Helicopter called the Cheyenne.”

Sprey remembers that “the Air Force was shocked when it looked like the Army was going to buy a thousand of the Cheyenne helicopters because it would cost more than the USAF’s most expensive bomber at the time, the F-4. As a result,” the Air Force could not be outdone.

At the time, Colonel Avery Kay, who Sprey described as a wonderfully ethical man, “happened to be in a very good staff position in the Pentagon. He was part of the group that was advising the Chief of Staff -interestingly enough – on how to fight off budget raids by the Navy and the Army,” said Sprey.

In that position, Kay saw an opportunity to right a wrong. Kay had participated in crafting part of Johnson-McConnell agreement of 1966, in which the Army agreed to give up its fixed-wing aircraft, and the Air Force agreed to give up rotary wing aircraft. “Part of the deal was they were going to give Close Air Support forever,” stated Sprey.

Only later did Kay realize that the Air Force had no intention of keeping that promise.

Kay, “a man of great conscience” felt personally responsible or the Air Force’s lie and saw an opportunity to fulfill his promise when the Cheyenne helicopter came along.  Kay used the less-than-honorable budget games to “motivate” the Chief of Staff, and presented his the idea that if we produce a better airplane then the Cheyenne and convince the Congress, then will get the money to do to close support. ‘The Cheyenne will be killed, and we will have delivered on a promise, that Avery Kay felt so guilty about,’” said Sprey. 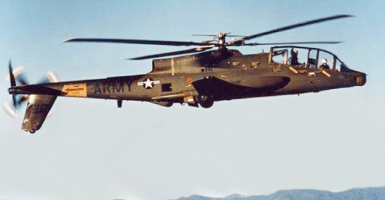 “That was a great idea. It was exactly a correct and ethical idea,” said Sprey. “It was his boss; a two star general who took it to that Chief of Staff, and said ‘look you know if you don’t go along with this – if you don’t put up something better than the Cheyenne – the Army is going to buy 1000 of these things and the money is going to come out of the Air Force hide and you’ll go down in history as the Chief of Staff who lost the Close Support mission.’”

“That was highly motivating.” Sprey continued, “The Chief of staff was purely a bomber guy, who had no interest in close support but he sure didn’t want to go down in history that way.” And in order to avoid that, he instructed “Avery Kay and his group to get started to start an airplane that would be much more lethal, much more survivable, and much cheaper than the Cheyenne.” Kay had been given “great marching orders. You can’t ask for any better, even if the motivation behind it was not exactly defensible,” stated Sprey.

According to Sprey, at the time Colonel Kay was in “a totally non-technical shop. They were supposed to be these tactical thinkers on how to protect the budget, right? So they sat down to try to get this airplane started and every other section of the Air Force, every bureaucracy headed by a three star, cut them off at the knees. Because all these other three-star generals weren’t going to go down in history as the guy who lost the mission,” stated Sprey. They certainly didn’t want to give any money, or anything to close support especially since the whole Air Force ethic was; we don’t give a damn about close support. ‘It was the lowest priority mission for us; we don’t want to be the handmaiden of the Army.’”

“So here’s poor Avery Kay,” Sprey continued, “with the staff of non-technical guys trying to come up with plans, and requirements , and write a proposal to get the industry interested and none of them know how to do it. It’s not their bailiwick. So he’s casting about for support – getting none with in the Air Force and by chance he runs across a very controversial paper that I had written.”

Sprey had been working at the time in the Secretary if Defense’s office and had published a paper “on how useless bombing was in Europe for taking on the Warsaw Pact.” Sprey claimed that the normal bombers were “not going to stop the Soviets at all. The Air Force was making basically no contribution to holding back the Soviets which was making huge strides despite the fact that we had made a huge investment; almost half of our European budget was going to airplanes. That paper had gone to the Secretary of Defense and was headed to the president, so I was enemy number one in the Air Force.

“I became public enemy number one for simply saying that the Air Force should funnel money into close air support. That was heresy. That made me big time enemy number one,” said Sprey, who noted that he and Kay were soon to become known as the “fighter mafia.”

Sprey explained that USAF Colonel John Boyd, who had developed the Energy Maneuverability Theory, “was at the heart of the fighter mafia. He was kind of the inspiring, and charismatic center of it and he attracted a number of people me included.” Spray said that he and Boyd had become close friends and they were soon joined by Colonel Everett Riccioni.

The fighter mafia was “dedicated to producing the most unbeatable, smallest, and cheapest air-to-air fighter in the world,” according to the Project On Government Oversight. Sprey said the group grew with members who “believed more strongly in good defense than keeping good relations with contractors.”

That group says Sprey, “continued well beyond the design of the F-16 and the A-10. They kind of started the military reform movement which attracted a whole lot of people including a very large military reform caucus and in the Congress.”

Sprey started working for Colonel Kay “totally unofficially, and illegally,” because he was supposed to be working for the Secretary of Defense not for the Air Force.

“From 9 to 5, I was working for the Secretary of Defense. I was doing my job. From five to midnight, I was working for Avery Kay in the Air Force, which was not at all my job, but he didn’t have anyone else to turn to. The rest of the Air Force was cutting him off at the knees because they did not want to do a close support airplane,” recalled Sprey.

Colonel Avery had three Viet Nam vets working with him as well. They had flown the A-1 there and it was considered the “hero” of the Vietnam War in terms of close air support.

“These guys had the hands-on experience. They’d flown the mission.  They had faced the danger and supported hundreds of ground units, and saved them from being overrun by the Viet Cong. So that was a great start. We kind of distilled that experience, and we went all the way back to World War II.”

Sprey and his team also drew on the experiences of a German pilot by the name of Colonel Hans-Ulrich Rudel. Rudel flew a Stuka in over 2,500 combat missions in which he claimed 2000 targets destroyed.

The team read Rudel’s account of close air support in the war. “We learned a lot from that,” said Sprey. “He personally destroyed 511 tanks.”

“We distilled all of that experience – and this is a very different way of designing airplanes – we weren’t leaning on technology first,” said Sprey.

“Technology is enormously important. I come from a technology background but, you’ve got to start with what really happens in combat and that’s what we did. When you distill it all down – what has to happen to do close air support – to really help the guys on the ground – is you got to be able to get in close enough to see them and with they’re opposing and what their dangers are. How they’re about to be ambushed. What tanks they’re facing. What machine gun nest they’re facing. What fortifications they’re facing, and that takes an airplane that’s got to be able to get in real close, and slow. You come flashing by there at 500 miles an hour – you are hopeless and useless.”

The first thing the team did was “design an airplane that could get down in there – pretty much in the mud with the ground guys, and that meant it had to be highly maneuverable at speeds of about 250 to 350 miles an hour to really be able to really be able to turn tight and have plenty of motor to accelerate and get out of there,” said Sprey.

Of course, once you get in there, you’ve got to be able to survive,” said Sprey. “We took more radical measures. We wrote more extreme requirements for survivability than anyone has ever put in an airplane.”

“We wrote specifications about every part of the airplane in pure practical language; this was not technical computer models or anything. You had to be able to fly the airplane home if you got any control of the airplane shot off.  You had to have a backup control that could get you home. You had to have back-up engine, so when you blew up one engine, the other engine had to be far enough away so it wouldn’t blow up. The fuel had to be where the engines weren’t. This was all really radical stuff. The designers hated it, and it put tremendous constraints on them. Things that they had never been used to but, it turned into the most survivable airplane ever built. And that’s essential; you can’t get down in the mud with the guys who are being shot at if you can’t take some hits.”

“You can’t ask the pilot to take those risks unless you’ve done a tremendous job to protect him, and our final thing in protecting the pilot was the famous 1500 pound titanium bathtub that he sits in, which made him pretty much immune to all anti-aircraft guns up to 23 mm. Of course he had to be able to see out of the airplane – super important – because he is trying to get close to the ground and see everything that the guy on the ground can’t see,” said Sprey.

Sprey said the cannon was “essential, absolutely essential.” Sprey said that Rudel had strapped a 37 mm on his Stuca, which allowed him to kill so many tanks. “It was perfectly obvious to us, reading his experience, and of course talking to the A-1 guys that the gun was the most important weapon on the airplane – not just for tanks, but for shooting up machine gun nests, trucks, light armor, pretty much anything that presented dangers to infantry and your friends.”