TUSD administrators and many directors won a large raise thanks to Prop 123 on Tuesday night. Prop 123 was sold to voters as a means to increase teacher pay, however the Tucson Unified School District Governing Board took advantage of the fact that there were no requirements built-in to the measure to ensure the money made its way into classrooms.

Board member Dr. Mark Stegeman, an Economics professor at the University of Arizona, made a motion to set aside the proposed 1 percent raise for administrators and directors. Board member Michael Hicks seconded Stegeman’s motion. Board members Adelita Grijalva, Cam Juarez, and Kristel Foster insisted that the already highly paid administrators receive raises much larger than the mere $700 a year increase teachers will now receive.

For all of Dr. Sanchez’s handwringing over low teacher pay, he certainly could have done more to help teachers and make TUSD more competitive in the competition for teachers.

As the ADI reported on Monday, Prop 123 was a compromise that allowed the state to pay less than it owed the school districts under Prop 301. Prop 123 also omits the restrictions that required 60 percent of the 301 money to be paid to teachers. The remaining 40 percent could also be used for teacher pay or a few other specific items. TUSD is choosing to use Prop 123 money to provide pay raises to its highest paid employees and to increase spending on an unknown number of budget items by an unknown amount of money.

The discussion at Tuesday’s meeting was often contentious as Grijalva pushed through the administrators’ raises.

Hicks called the administration’s proposal to award a 1 percent increase to already highly paid administrators while bus drivers and cafeteria personnel, who have far more interaction with students, will see only a minor increase a “travesty.” The bus drivers’ 1 percent pay raise means they will make $.11 more an hour or a grand total of $3.30 more a week. Their pay raise will do nothing to reduce the high turnover among school bus drivers who can take their commercial drivers licenses else where for better pay. TUSD needs to rethink bus driver pay in the context of providing safe transportation for TUSD’s students.

“Prop 123 generates $7 million a year to start with, and the raise to teachers is considerably less than,” said Stegeman. “I am concerned about that perceived inconsistency. I agree with Mr. Hicks; this item folds in different bargaining units, and then the non-bargaining units get the 1 percent too. I’m a little concerned about giving them 1 percent especially because giving them 1 percent is considerably more than a bus driver.”

Retired educator and public school advocate Rich Kronberg stated, “For years, TUSD has had the worst record of any of Arizona’s Very Large School Districts…by far…when it comes to the percentage of its revenues that go into the classroom. The last time the figures were audited by the Arizona Auditor General in 2015, less than half of TUSD’s revenues (48.7%) went into the classroom. The average for the Very Large Districts is 56.6% of revenues going into classrooms. By comparison, the Auditor General’s most recent report shows that TUSD spends far more on administration than any of the other districts in its size category, $897 per pupil compared to an average of $641 per pupil with the other Very Large Districts. Because of this action by the Governing Board majority the amount of money going to administration is sure to go way up while the percentage of money going into classrooms may go up, but much more slowly.”

Kronberg continued, “It is important to understand that TUSD has so many unfilled teacher vacancies because it spends so little money in the classroom and so much on other…much less important…things like administration. There is not a single study that shows the quality of a school district’s administration makes a significant difference in student achievement. The quality of teaching is, in fact, the only variable schools can impact that does make a difference in student learning. This single minded focus by the three members of the Governing Board majority on enriching TUSD’s administration at the expense of its teachers does its greatest damage to TUSD’s students. It is, after all, the students who will pay the price for the failure of TUSD to fill teacher vacancies. In an ironic twist, the students who will pay the biggest price are the ones in the most challenging schools because these are the schools where there are the greatest number of classes staffed by a parade of substitutes all year long. These are the very students who Grijalva, Foster and Juarez say they are most interested in educating. When they say that…they are lying. Wait, I meant to say THEY ARE LYING! If they really felt that way, the largest pay increases would be put into TUSD classrooms, and the tiny raises would go to the already over-compensated and under-worked administrators. That is what would benefit TUSD’s students.”

From the Arizona Auditor General’s Dollars in the Classroom Report: 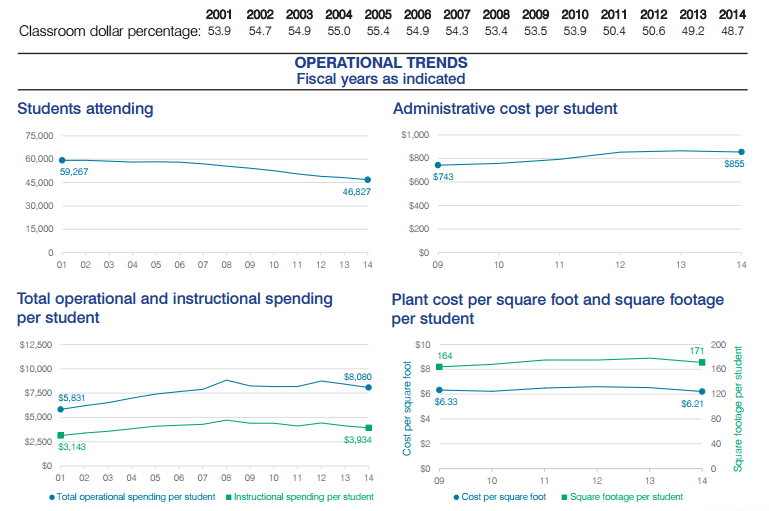