Pima County Supervisor Sharon Bronson and her campaign consultant, Shasta McManus, of Strategic Issues Management Group appear to have violated state statute, according to emails turned over to the Arizona Daily Independent. The emails were part of a records request filed last month.

McManus appeared to be giddy when she announced in an email dated May 20, 2016 that she wanted to make a story about a 19 year old’s fake website go viral. Unfortunately for the pair, the excitement got them better of them and in the course of the scheme they used County resources in violation of state law. 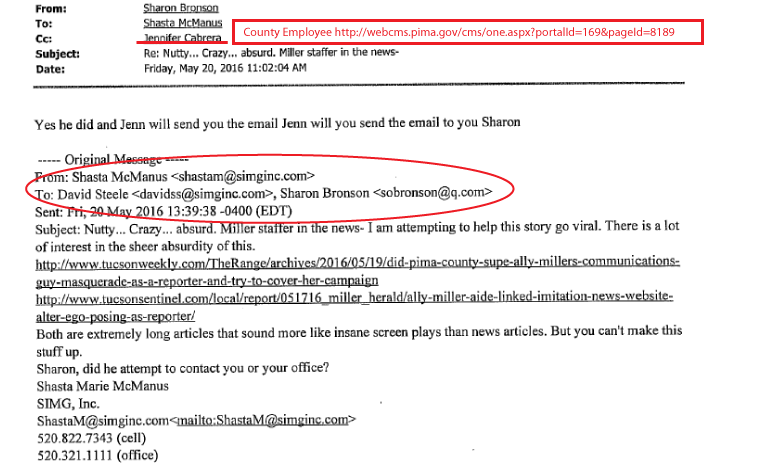 According to Republican Legislative District Chair Sergio Arellano, whose District is partially represented by Bronson, a report will be filed with the Attorney General’s office. Arellano stated in an appearance on the James T. Harris radio show stated that it was unfortunate that Bronson and McManus wanted to use a mistake by a 19 year old to attack Supervisor Ally Miller.

At issue is the decision by Ally Miller’s staffer, 19 year old Timothy DesJarlais, to create a fake news website on his own time. DesJarlais at first denied making the website when other campaigns complained of it to local media. Eventually he admitted to making the site, but not before tabloids used it to attack Miller. While Miller’s challenger John Winchester made false accusations about Miller, Supervisor Ray Carroll, and Bronson used the faux scandal to abuse Miller at Board meetings.

Arizona Revised Statute 11-410 — Use of county resources or employees to influence elections; prohibition; civil penalty; definitions reads in part:A. A county shall not spend or use its resources, including the use or expenditure of monies, accounts, credit, facilities, vehicles, postage, telecommunications, computer hardware and software, web pages, personnel, equipment, materials, buildings or any other thing of value, for the purpose of influencing the outcomes of elections. Notwithstanding this section, a county may distribute informational pamphlets on a proposed bond election as provided in section 35-454 if those informational pamphlets present factual information in a neutral manner. Nothing in this section precludes a county from reporting on official actions of the county board of supervisors.

H. For the purposes of this section:

To compound matters, Bronson then sent an email containing one of the articles, sent to her office by Dylan Smith of the Tucson Sentinel, to campaign contributors. 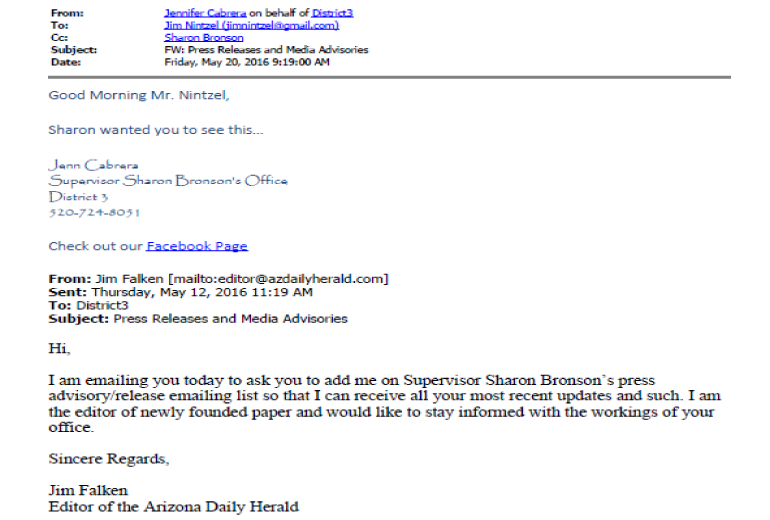 Bronson isn’t the only one who has used County resources in a questionable manner. Records indicate that Ray Carroll’s staff was tasked with transcribing an appearance by Miller on Harris’s show. It is hard to imagine, given Carroll’s relentless attacks on Miller, that his staff ‘s labor will serve anything other than his political agenda.

Your County tax dollars at work.