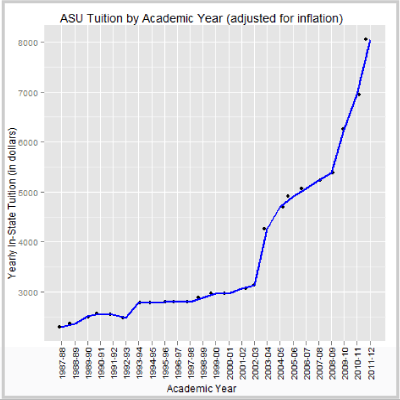 The Arizona Attorney General’s Office filed a lawsuit against the Arizona Board of Regents for dramatically and unconstitutionally increasing the price of base tuition and mandatory fees at Arizona’s public universities by more than 300 percent since 2003. The Arizona Constitution requires that “the university and all other state educational institutions shall be open to students of both sexes, and the instruction furnished shall be as nearly free as possible.”

“Every Arizonan dreams of being able to send their kids to college,” said Attorney General Mark Brnovich. “Within the last 15 years, Arizona went from having some of the most affordable public universities to having some of the most expensive. We believe the Board of Regents needs to be held accountable and answer tough questions for Arizona’s skyrocketing tuition rates.”

The State alleges that ABOR has adopted unconstitutional tuition-setting policies, has abandoned its duty to serve as a check on the university presidents, and has ceased deriving tuition rates from the actual cost of instruction. According to the lawsuit, ABOR has misinterpreted its “nearly free” mandate to mean whatever the market rate is for peer institutions and made itself as the arbiter of “affordability” for Arizona’s students and families.

At the same time, the universities have decreased the quality of the courses offered. Students are encouraged to obtain degrees in study areas that offer few employment opportunities. According to one University of Arizona professor, who serves on the General Education Committee, that reviews proposed classes, staff has been encouraged to approve low rigor courses that have “sex appeal.” The professor, who asked not be identified, said that their “more serious colleagues” will not be able to protect STEM courses if they do not approve money generating grievance studies-based course titles.

The Arizona Attorney General’s Office noted that “intertwined with these price hikes, ABOR has also refused to comply with Arizona law prohibiting state subsidies for students “without lawful immigration status.” The AG argues that ABOR is causing the illegal expenditure of public monies and the failure to collect tuition in direct contravention of clear and established Arizona law.

The Arizona Constitution requires that “[t]he university and all other state educational institutions shall be open to students of both sexes, and the instruction furnished shall be as nearly free as possible.” Ariz. Const. art XI, § 6 (emphasis added).

Fifteen years ago (the 2002-2003 academic year), the base tuition and mandatory fees for in-state students starting as undergraduates at the three Universities was approximately $2,600 per year.

For the 2017-2018 academic year, base tuition and fees for in-state students starting as undergraduates is as follows:

In contrast to the increases in tuition, the consumer price index has increased only 36% over the same approximate period. Bureau of Labor Statistics data for change between July 2002 and July 2017, available at goo.gl/k6GW2b, accessed Sep. 6, 2017.

All public universities, with the inflationary pressures of broad student loan expansion, did mildly outpace the consumer price index over the same period of time. The national average tuition for public 4-year institutions climbed slightly over 100% as opposed to Arizona’s wild increases of more than 300%. In 2002, when the constitutional mandate still mattered to ABOR, Arizona tuition hovered around the 25th percentile nationally. After a mere 15 years of ignoring the constitutional madate, Arizona’s public university tuition exceeds the 75th percentile nationally.

This means that ABOR has raised the base tuition and fees for in-state students starting as undergraduates at approximately nine to ten times the rate of inflation and approximately twelve to thirteen times the rate of increase of median family income over the period covering the last fifteen years. Below is a chart that on information and belief shows ASU tuition and fees from 1987 to 2011.