The Arizona Geological Survey has made available for free download a 48-page booklet which explains geologic features of two areas of southeastern Arizona. This well-illustrated booklet is intended for the layman but is also interesting to experienced geologists. 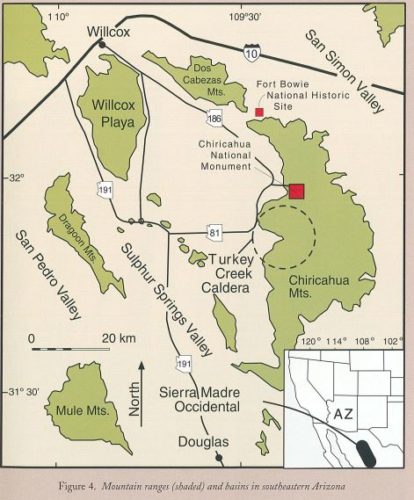 The Chiricahua mountains are known for their thousands of rock pinnacles formed in volcanic rocks by weathering during the last glacial epoch. In a previous article, I explain “The Explosive Geology Of The Chiricahua Mountains.”

The new booklet provides photos and descriptions that allow you to find many volcanic features along major roads and trails in the monument. None of these features are designated by markers along the trail.

The geology of Fort Bowie is quite different and consists of sediments and granite intrusive rocks.

As described in the booklet:

“Fort Bowie was built to guard Apache Pass, a natural passage between the Dos Cabezas and Chiricahua Mountains that connects the San Simon and Sulphur Springs Valleys. The dependable springs, including Apache Spring, that have attracted humans to this narrow passage for thousands of years are also the result of geology, specifically the Apache Pass fault.”

The booklet starts out by describing the past 30 million years of geologic history which includes plate tectonics and volcanism – the processes which gave rise to the features visible today.

The features of the Chiricahua Mountains are put in context as follows:

“The landscape of Chiricahua National Monument, like that of much of the Earth’s surface, is a complex mosaic of large and small geologic features. Some of these features were produced by processes that were more active in past geological time but have now slowed or ceased. Other features are the result of past and currently active processes; only a few owe their origin solely to recently active processes. Welded tuff, fiamme, surge beds, fossil fumaroles, and the dacite caprock, for example, were all produced during the eruption of the Turkey Creek caldera, about 27 million years ago. Some joints and spherulites formed as the ash sheet cooled. Other joints and the region’s mountain ranges and intervening basins are the result of Basin and Range faulting during the period 25 to 5 million years ago. Willcox Playa, talus cones, pinnacles, and slot canyons were produced by processes that were more active during the wetter, cooler climate of the glacial epochs from 1.6 million to 10,000 years ago. Tafoni, rock varnish, lichens, case-hardened surfaces, chicken heads, exfoliation shingles, horizontal ribs, solution ponds and the rounded form of the columns are all forming today. Unraveling the evolution of such complex landscapes makes geology a particularly challenging science.” If you are unfamiliar with some of the names of features, read the booklet.

URL to the booklet: http://repository.azgs.az.gov/sites/default/files/dlio/files/nid1731/dte-11chirichua_mtns.pdf 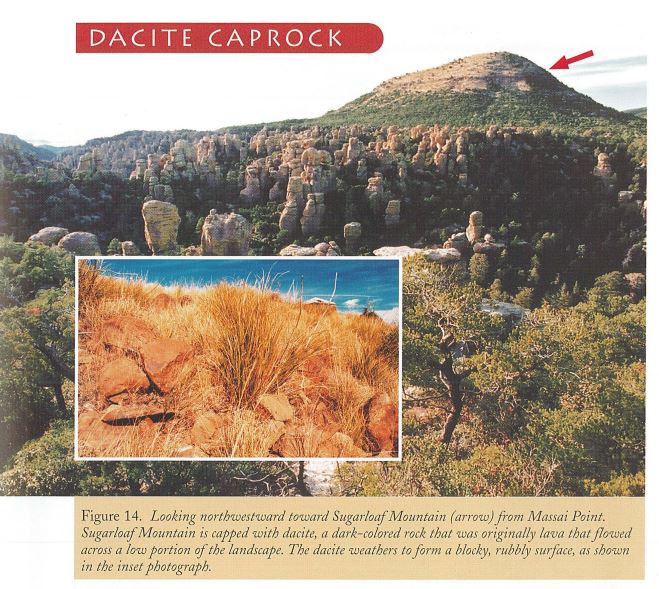