Her own use of RICO funds has been questionable, and now a legal expert is advising Pima County Attorney Barbara LaWall to step aside in the RICO spending approval process. In an interview with KGUN9 News reporter Valerie Cavazos, former Maricopa County Attorney Rick Romley argued that LaWall has a clear conflict of interest.

Questions as to who should assist the supervisors in performing a review and approval of RICO spending by the County Attorney’s Office arise from a recent change in Arizona law. The new law requires the supervisors to review RICO spending requests made by the County Attorney’s Office. That review necessarily includes legal judgments few supervisors would be qualified to make. As a result, supervisors would rely on legal counsel in order to determine which requests meet the standards for RICO use.

LaWall has argued that her office can and should be the supervisors’ counsel.

“Barbara needs to step away and be cooperative and help assist them in retaining their own attorney,” Romley told Cavazos referring to the supervisors, “and let that attorney guide the Board on this particular thing.”

Romley explained to Cavazos, “If you’re just relying upon the county attorney, which has a stake in it, who wants the oversight, for example, to be as limited as possible. That’s not necessarily what the law is intended to do. So they need to hire their own attorney.”

In 2015, Rep. Bob Thorpe tried to pass strong RICO legislation, but it was killed due to pressure from county attorneys across the state. The ADI reported on an email sent at the time by Don Conrad of the Arizona Attorney General’s Office to fellow staff member Michael Bailey, in which discussed the need for Attorney General Brnovich “to meet with certain prosecutors to identify a way to jointly oppose mischief in the legislature that might harm our RICO efforts.” 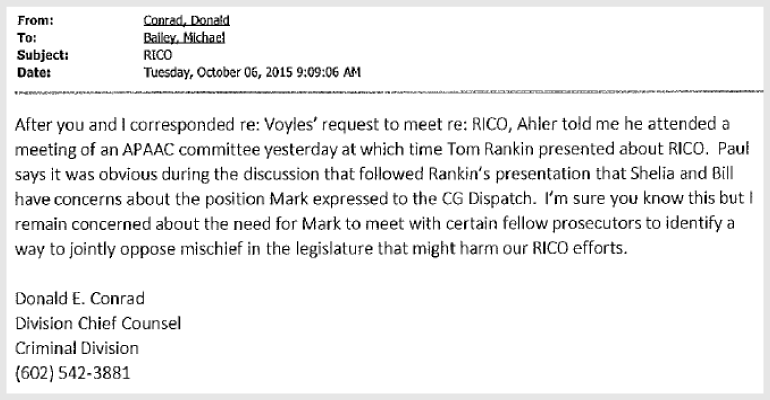 Last legislative session, Rep. Eddie Farnsworth offered a watered down version that passed with little resistance. Many say that Farnsworth’s law simply diffused responsibility by involving supervisors. Under the new scheme, county attorneys can advise the supervisors, and the supervisors can use the ‘my-lawyer-told-me-it-was-okay-defense.’

As Cavazos noted in her report, some supervisors actually take their responsibility seriously. Cavazos reported: “During a recent board meeting, supervisor Steve Christy said, “The whole issue is terribly concerning and frankly it scares the hell out of me.” Rick Romley says — it should.”

“You really need to get it right at the very beginning. Make sure you have a clear understanding what your responsibilities are. What are the protocols? What are the procedures that should be followed? If they don’t do it right and something goes wrong. They’re going to be blamed,” Romley told Cavazos.

The issue LaWall has with RICO came into sharp focus during the 2016 election cycle, when LaWall’s challenger in the Democratic Primary, Joel Feinman, exposed her questionable spending.

Feinman wrote in one article on the subject:

Under Arizona law, County Attorneys may distribute the RICO funds allocated to their county to whichever agencies they see fit. Though RICO laws were first written with the intention to fund gang, crime, and substance abuse prevention programs, in FY2015-2016 County Attorney LaWall only allocated 0.08% of available funds to these efforts.

RICO laws and forfeiture proceedings generate considerable amounts of money every year. According to the Arizona Criminal Justice Commission, which was created in 1982 by the Arizona legislature to monitor and report on RICO spending, the Pima County Attorney’s master RICO account contained more than $12.6 million at the beginning of fiscal year 2015 – 2016. Out of this sum, the County Attorney chose to give the Pima County Sheriff Department’s “Financial Services Unit” more money than any other law enforcement agency received – $533,000.

Per the Sheriff’s Department, that is the unit responsible for budgeting and finance, not operations or investigations. To all other Sheriff’s Department units, Ms. LaWall allocated $0, while eight other Pima County law enforcement agencies – including the Pasqua Yaqui and Tohono O’odham Police Departments – also received $0. The Pima County Attorney did see fit to spend the second-largest sum of RICO dollars on her own office – $491,278….

Examining the Pima County Attorney’s RICO accounts over the last sixteen years reveals bigger problems than end-of-the-year surpluses. Between June 30 and July 1, 2005, almost $60,000 seems to have disappeared from the books. And while public documents reveal that the County Attorney had $438,524 in its account on June 30, 2011, the office reported that it didn’t have any money at all in its account on July 1, 2011. Indeed, according to the Arizona Criminal Justice Commission, the Pima County Attorney did not have one cent of RICO money from July 1, 2011, until January 1, 2012, when they suddenly reported a positive balance of $622,467.

Finally, public databases reveal idiosyncrasies in the way Ms. LaWall spends RICO funds. Per the Arizona State Government’s General Accounting Office, in fiscal year 2015 – 2016 the County Attorney spent $4.6 million in RICO Special Revenue funds. This money went to expenses as varied as parking subsidies, advertising, and life insurance. Almost $13,000 went to “promotional items,” $14,000 went to “vacation payouts,” and $1.277 million was spent on “other miscellaneous charges.” The Pima County Attorney has never publicly defined “miscellaneous,” nor explained why such an opaque line item consumes such a large portion of the fund.

The ADI examined some of the items LaWall’s office purchased with those RICO funds.

The ADI requested all documents related to the items including proofs that might have been approved before payments. LaWall’s office only provided proofs for the dark blue pencils, and claimed that because they included an admonishment to avoid drugs along with her name, they met the anti-racketeering goals.

LaWall claimed that her approval of a transfer of RICO funds in the amount of $2,000 to the Greater Tucson Leadership group to fund a retirement party of sorts for former Sheriff Clarence Dupnik was celebration of anti-racketeering foes and therefore qualified. Of course, the explanation is ironic given the fact that the Sheriff’s Department was accused of money laundering.

Cavazos’s hard hitting report turned to a discussion by the supervisors about retaining outside legal counsel and securing an audit by the Arizona Auditor General. “County Administrator Chuck Huckleberry suggested the board wait because the Attorney General is investigating the Pima County Sheriff’s Department,” wrote Cavazos. “Huckleberry had said, “I think we have time on the independent authority because we don’t want to do anything until the Attorney General concludes his investigation because it’s a criminal investigation and we would not want to interfere with that in any way.”

“I don’t understand why,” Romley told Cavazos. “The Auditor General works with the Attorney General all the time. The Auditor General worked with me all the time when we’re doing a criminal review as well. When I did an investigation, after I retired as the County Attorney in Maricopa, of the county manager in Pinal County. I brought the Auditor General in to work with me and we made both recommendations on things that needed to be improved upon. Plus, I brought criminal charges against the county manager for stealing funds. I mean I don’t know why he’d be saying that. That makes no sense to me.”

It makes no sense to a lot of people.

Rep. Thorpe told the ADI in an email that “reforming RICO and Civil Asset Forfeiture within Arizona has been an uphill battle, but one worth pursuing. These programs were originally created in the 1980s with good intentions, to provide tools to law enforcement in order to contend with the unconventional tactics used by organized crime and criminal enterprises. Unfortunately, since their inception, some law enforcement agencies and prosecutors have started using these programs against average citizens (low hanging fruit), and they see the financial proceeds gained through civil proceedings (not criminal charges) as some sort of slush fund to be used / abused as they see fit. Our legislative success in reforming these programs is just the start, phase one. With increased reporting requirements and higher burdens of proof requirements, the legislature will continue to incrementally reform these programs to hopefully refocus their use back to organized crime and away from average citizens, and to ensure that law enforcement cannot misuse the funds.”

Many hope that the future changes include a specific prohibition of county attorney involvement in the approval process.