This week, Arizona State Sen. Catherine Miranda announced her intention to challenge her former harasser Rep. Ruben Gallego in the Congressional District 7 Democratic Primary. Miranda told the Capitol Times that “CD7 deserves a representative that puts ego and partisanship aside to get things done.”

“I filed today to run for Congress in CD7. I was born and raised in the district and have committed the last 20 years to serving as an educator and legislator…In this political climate, CD7 deserves a representative that puts ego and partisanship aside to get things done.” https://t.co/sCq0pWoLQ6

Miranda and former fellow lawmaker Lydia Hernandez filed a harassment complaint against Gallego in 2013. The complaint by the two devout pro-life liberals focused on Gallego’s alleged comments that included an implication that Miranda was promiscuous.

In response to Miranda’s CD7 announcement, Gallego attacked her as an “anti-choice, corporate-sponsored politician who endorsed Doug Ducey and stood by while he gutted public education.”

Miranda, a staunch advocate for DREAMERs has supported school choice especially in urban and very rural areas including reservations.

On her campaign website, Miranda describes herself in the following statement: “I’m Catherine Miranda, and I’m a Democrat running for Congress. I have served my district as an educator, as a legislator in the Arizona House of Representatives and Senate, and now it’s time for me to serve you in Congress. In this divided climate, you deserve someone who will work for you. You deserve someone who will put partisan politics aside, and get things done. I grew up in your community, and I know first hand the challenges that your families face. I know the impact that immigration policies drafted in DC have here at home, and how healthcare and education legislation affects our families.”

Had Miranda’s complaint been filed in 2017, Gallego would have come under intense scrutiny and might have lost his seat. At the time Miranda did file the complaint, she advised legislative counsel that she had “no interest in a prolonged investigation regarding the allegations of sexual harassment and improper conduct against a member of this legislative body.” Miranda then asked, “Can we proceed with prompt interviews to resolve this matter based on facts? My sole interest is to protect my personal integrity as a woman and a member of the state Legislature, in the face of remarks which are insulting and degrading.”

Gallego, a short stout man, had earned the nickname “The Troll” while serving in the Arizona Legislature. According to one Capitol insider, Gallego “would pop up at the weirdest times always demanding something.”

According to the 2013 complaint, Gallego had made a sexual “slur” following “a disagreement on April 1, 2013, between members of the Democrat Caucus on the floor of the House in connection with action on SB1075. Regarding the disagreement, Rep. Miranda, Rep. Lydia Hernandez and Rep. Juan Escamilla had voted in opposition to their own caucus leadership on SB1075. Following that floor action, Rep. Hernandez had made a posting on Facebook about the disagreement.”

Gallego and Escamilla denied that Gallego made the comment. In response, Hernandez and Miranda wrote Speaker of the House Andy Tobin:

The following Monday while in the House elevator with Representative Gallego I asked if the tweet was directed at me. His response was, “Absolutely.” It is also known that Representative Gallego does possess and carry a firearm, which under the circumstances are disturbing to both of us. Furthermore in relationship to the sexual remarks made we have been informed that an assistant to a Legislator was threatened with termination by Representative Ruben Gallego.

Regardless of the outcome and whether this proceeds to another level of review we are entitled to protection and respect consistent with the Rules of the House of Representatives. We are requesting that at a minimum an apology be made regarding the sexual remarks and whatever other actions are deemed appropriate to ensure that the dignity and protection of House Members is maintained. 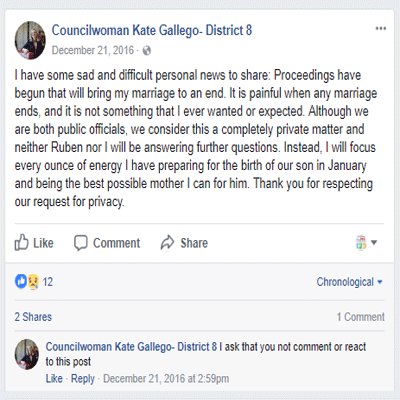 Gallego has changed considerably since supporting SB1075, a bill offered by then-Senator Don Shooter, who unlike Gallego has not escaped from career-ending clutches of the #metoo movement. Gallego is now a very vocal opponent of President Donald Trump, his proposed wall. In February 2017, Gallego and Rep. Raul Grijalva invited two children of Guadalupe Garcia de Rayos, was apprehended in Phoenix and deported back to Mexico.

However, Gallego seems to always be full of surprises. He surprised former admirers and raised eyebrows when his now ex-wife, Phoenix City Council member Kate Gallego posted an announcement on Facebook in December 2016 that she and the congressman were divorcing. She wrote:

“I have some sad and difficult personal news to share: Proceedings have begun that will bring my marriage to an end. It is painful when any marriage ends, and it is not something that I ever wanted or expected. Although we are both public officials, we consider this a completely private matter and neither Ruben nor I will be answering further questions. Instead, I will focus every ounce of energy I have preparing for the birth of our son in January and being the best possible mother I can for him. Thank you for respecting our request for privacy.”

The investigation’s findings were recited in a letter to Tobin:

At the House of Representatives, staff and elected members receive formal training intended to heighten awareness regarding matters of unlawful harassment. Members and staff are encouraged to report suspected matters of harassment to the House Rules Attorneys.

This follows up on our preliminary contact and report to the Chief of Staff regarding a verbal complaint received at the Rules Attorney Office by Representative Catherine Miranda. The complaint involves an allegation of the use of language in the nature of a sexual slur directed to or about her by or on behalf of Rep. Ruben Gallego, House Assistant Minority Leader. Because Rep. Miranda, Rep. Gallego, and all others involved in the events described herein are members of the Democrat Caucus, Caucus Counsel Rhonda Barnes has participated at our request in investigating this matter and House Minority Leader Chad Campbell has been notified. The following summary outlines the actions that have been taken to investigate and follow up on Rep. Miranda’s complaint, to interview and counsel with all persons believed to have personal knowledge of relevant facts, and to make recommendations regarding any further investigation, remedial action or other follow-up.

Listening to Rep. Miranda at each of these meetings, she believed the slur occurred following a disagreement on April 1, 2013, between members of the Democrat Caucus on the floor of the House in connection with action on SB1075. Regarding the disagreement, Rep. Miranda, Rep. Lydia Hernandez and Rep. Juan Escamilla had voted in opposition to their own caucus leadership on SB1075. Following that floor action, Rep. Hernandez had made a posting on Facebook about the disagreement.

On the afternoon of Monday, April 8, 2013, a meeting was held with Rep. Miranda, Rep. Gallego, Rhonda Barnes and Tim Fleming in Rhonda Barnes’ office. Rep. Miranda set out her complaint about the slur and explained how she was offended by it and how she wanted an apology. Rep. Gallego was interviewed during the course of the meeting. Rep. Gallego, acknowledged the disagreement within the Caucus and his meeting with Rep. Escamilla. When questioned about the slur made in Spanish, he indicated he did not say it and therefore could not apologize for something that he had not said. Rep. Gallego recommended interviewing Rep. Escamilla. Responding to questions, he acknowledged his understanding that comments or slurs that might be understood to have a sexual connotation and that might be offensive to some must be avoided. At the end of the meeting, Rep. Miranda concurred that there should be further investigation.

When asked about the slur, she stated that it had been reported to her by Rep. Escamilla. Rep. Hernandez stated she believed the slur had a sexual connotation that she understood to mean the giving of “a sexual favor”. She stated she believes the statement had actually been meant in that way and that it had been directed towards to her and Rep. Miranda by Rep. Gallego, however she acknowledged that she did not hear Rep. Gallego make the statement himself. She stated that she knew Rep. Escamilla and did not believe he would make a slur like that on his own. This is a reason, she says, she believes the slang was really “from Ruben.” She stated that later she called Rep. Miranda on the phone to talk to her about the slang term that had been used and what it meant.

Based on the foregoing, we believe Rep. Miranda has been genuinely offended by the slur language at issue that has been reported to her. However, there is insufficient information available to reach a conclusion that there has been unlawful harassment. We are unable to corroborate the allegation of the making of a sexual slur by Rep. Gallego because Rep. Gallego denies making such a slur and no one interviewed says they heard him say it. While by Rep. Escamilla has admitted making a slur in Spanish while speaking to Rep. Hernandez, and Rep. Hernandez reports hearing the same slur in that conversation, each of those two parties attribute different meanings to the slur and to whether the slur was made by or on behalf of Rep. Gallego based on varying interpretations of context and words spoken. We believe there are no other witnesses to the conversation between Rep. Hernandez and Rep. Escamilla. No one interviewed has raised a complaint about Rep. Escamilla, and he has stated to us that he has nevertheless apologized to Rep. Miranda for any misunderstanding. No information gathered during interviews suggests any pattern of unlawful harassment.

Because Rep. Gallego and Rep. Escamilla have now been interviewed, they are fully aware of the type of slurs and other statements that are more potentially sensitive and therefore unwelcome. During the interviews, Rep. Gallego and Rep. Escamilla have been reminded of the restrictions against unlawful harassment. By way of additional remedial action, we recommend that you meet with Rep. Miranda and Rep. Hernandez so that they understand your involvement in this process. We believe these individuals should be informed to report any future incidents immediately including any incidents of suspected retaliation.