CHANDLER – Every night, about two dozen men and women gather on a street corner and go through the same routine: A monitor searches their backpacks, suitcases and toiletry bags. They go over the rules, then board a bus to where they’ll “camp out,” eat dinner, say a prayer and bunk down for the night.

These churches are among the participants in the Interfaith Homeless Emergency Lodging Program, a uniquely suburban model for sheltering people who are homeless. Unlike large shelters that house hundreds every night – such as the one run by Central Arizona Shelter Services in downtown Phoenix – I-HELP programs don’t have a permanent location. They rely on churches to donate space and on community groups to provide food and manpower.

There are five I-HELP programs in Arizona – in Tempe, Chandler, Mesa, Avondale and the Sunnyslope neighborhood of north-central Phoenix. Chandler’s program began in 2013 under the direction of AZCEND, a nonprofit that provides such services as providing food boxes to collecting school supplies.

“The budget for I-HELP is very small. Because we depend on volunteers so much, we’re really able to save a lot of money,” said Martha Myers, programs director at AZCEND. “And politically, it’s just an easier way. It’s an easier sell to have an I-HELP than a bricks-and-mortar shelter.

“It makes sense to do what the community is comfortable with.”

More than 6,200 people were homeless in Maricopa County in January 2018, according to the Maricopa Association of Governments; of those, more than 2,600 were not in shelters. Although most of the homeless live in Phoenix, numbers in the East Valley are growing. But there aren’t many options when it comes to shelters. 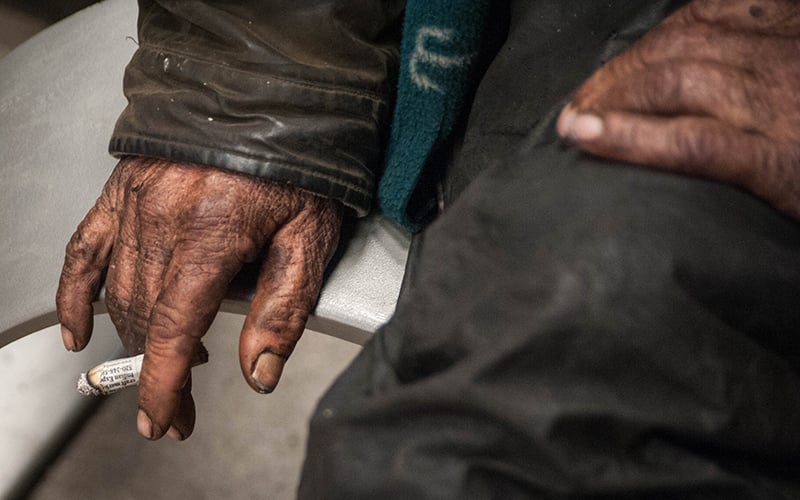 Counting on conversations with people who are homeless to reveal respect, gain resources

AZCEND works with churches of all denominations, as well as community organizations, such as the Kiwanis Club Chandler and the American Muslim Women’s Association of Arizona, to keep clients housed and fed.

“It really is a community-wide effort,” Myers said. “If every community would step up the way the faith community has in Chandler, it would just be great progress.”

The Chandler I-HELP program has provided its clients with case management since the beginning. A full-time employee helps clients get identification, apply for housing programs and look for jobs. In January, however, the process became more formal: Instead of coming and going every few nights, clients now must commit to staying in the program and receiving case management for 90 days.

The I-HELP program in each city is run by a different nonprofit. Not all have 90-day programs as AZCEND does, but all follow the same basic model: A nonprofit partners with local religious and community groups, and clients sleep in a place of worship every night.

Brian Sherwood, 37, and James Anderson, 29, joined AZCEND’s I-HELP program on July 25. The couple, who’ve been together about three months, said the program allows them to look for work, wait for permanent housing and stay sober.

“We’re drug addicts. That’s our downfall, that’s why we’re here,” Sherwood said. “We have 34 days clean, and that was the time when we decided … that lifestyle’s just not worth it. We’re better than that.”

Sherwood, who’s originally from Lake Havasu City, has been homeless for about a year. Anderson, who grew up in north Phoenix and whose parents are the pastors of Community of Christ Church in Chandler, has been homeless on and off for seven years, he said.

“To be gay and sober in Phoenix is very difficult. There’s a lot of drug use,” Sherwood said. “If you stay at someone’s house, (drug use) is just expected. And it’s not what we want. We need a place like this. It’s mandatory-sober environment, and it’s exactly what we need at the exact right time.”

Over the next three months, Anderson and Sherwood will work with a case manager while they look for jobs and wait for housing.

AZCEND works with more than 30 organizations to serve its clients. Eighteen churches host at least one night a month, and a dozen others donate food.

“We do have a really strong base of the churches here that really go out of their way to help and understand the need and feel a need to give back,” said Dara Gibson, the development director at AZCEND.

Multiple organizations often volunteer on the same night. On Wednesdays when the Trinity Christian Fellowship hosts the program, volunteers from the Chandler West Stake of the Church of Latter Day Saints will serve the meal.

“A lot of people maybe have an opinion that churches don’t do anything other than for their congregation,” Sherwood said. “But they do reach out to the community. They do help. They do practice what they preach.”

For Shawn Donaldson, minister of outreach at Evident Life Church, volunteering with the I-HELP program was personal because of his own experiences with homelessness.

When he became minister of outreach at Evident Life, he decided that “when we have room, I’d like to sign up with this program and help get people back on their feet.”

Sherwood met Donaldson on his third night in the I-HELP program.

“He came up, he gave me a big hug,” Sherwood recalled. “I felt like he knew, like he could just tell what we have gone through without even knowing us. That’s the kind of the man that he is.”

The church may change every night, but the routine stays the same.

“When it comes down to this program, it’s beautiful,” Anderson said. “I’ve lived in shelters before, and I’ve never had one run like this where the same thing happens every night. No matter what, you do chores, food. … It runs the same way every night, so you don’t have any surprises.”

Clients are responsible for setting up their own sleeping mats after dinner. After that, Sherwood said, sleeping in a church “is kind of like a campout, an indoor campout.”

In the morning, clients pack up their mats, clean up, eat breakfast and take the bus back to AZCEND.

Clients are mostly on their own during the day. Some have case-management appointments or use the computers at AZCEND.

Sherwood said he has spent a lot of time at a public library “to beat the heat.” He used the library’s computers for “social media, but also … to apply for jobs and Craigslist and to see what’s hiring in the area.”

With the location changing each night, amenities like Wi-Fi and air-conditioning can vary widely, he said, but that’s a trifle.

“For 90 days … to have food and shelter and to not worry. It’s so much easier to look for work and to stay working than to wonder about where you’re going to sleep or eat the next night.”

Phoenix had the largest homeless population in Maricopa County with 4,562 people, according to the Point-in-Time Homeless Count analysis by the Maricopa Association of Governments.

The East Valley ranked second, with 1,263 homeless individuals in 2018. Of those, 559 people weren’t sleeping in a shelter.

With no permanent shelters to house the homeless in Chandler, I-HELP is helping bridge the gap.

In 2013, AZCEND, then known as Chandler Christian Community Center joined with For Our City Chandler, which coordinates volunteers and services in the city, to address homelessness.

“Concerned citizens came together and said, ‘How can we work on this problem?’” said Gibson, the director of development at AZCEND. “ And then they found this model, so AZCEND started using a very similar model and went to churches and community organizations.”

From July 2016 through June 2017, more than 400 individuals slept in churches through the Chandler I-HELP program for an average of 20 nights. AZCEND switched to a 90-day program to increase stability.

“Now, the people that we have on our bed list are clients that are committed to being here every night and receiving case management,” said Roxanna Nava, the I-HELP coordinator at AZCEND. That way, “we can focus more on clients individually and their needs, and try to get them out of the crisis that they’re going through.”

The number of clients in the I-HELP at any given time ranges from 15 to 25. In late July, there were 27 clients in AZCEND’s program. Nava said summer “is the time where every (shelter) is full,” because of the heat – including the Chandler I-HELP.

Clients usually hear about the program by word-of-mouth or through referrals from other shelters that don’t have beds.

“Now it’s the same people who are committed. We do an intake process, we meet with them and go over the whole program and the requirements. That gives them the idea that, once we put you on the list, you have to be here every night, you have to be willing to receive the help that we have to offer.”

The first step for many clients is applying for birth certificates, Social Security cards, driver’s licenses and other identification.

“People lose many of those items in storage, or maybe in their last living situation they may not have gotten those when they left,” Myers said. “Once you’re on the streets, the amount of theft that goes on … their stuff is stolen many, many times. So, people on the street frequently need to get those replaced.”

Clients also can list AZCEND’s address on job applications and receive mail there. Once they find a job, clients are required to convert 75 percent of their income into money orders, which they get back when they leave the program.

That way, “you have money to get into the places that you’re going,” Sherwood said. “And that’s amazing.”

Not every client stays in the program for the full 90 days.

“It’s a 90-day program, but we try to get clients out of here (sooner),” Nava said. “And there’s clients that need a little bit extra time, so depending on each individual client and their circumstances, we’ll let them stay a little longer.”

Valley Unitarian Universalist in Chandler is one of 18 churches that host I-HELP clients at least one night a month. (Photo by Ellen O’Brien/Cronkite News)

About Cronkite News 2611 Articles
Cronkite News is the news division of Arizona PBS. The daily news products are produced by the Walter Cronkite School of Journalism and Mass Communication at Arizona State University.