In the past several weeks we have seen many demonstrations by brainwashed young people and others who think the world will end if global temperatures exceed two degrees Celsius (now it’s down to 1.5 degrees). The trouble with that claim is that we’ve been there and done that and nothing bad happened. During the past 10,000 years (the Holocene), Earth experienced several cycles of warming and cooling which exceeded the mythical two degree limit. Civilizations thrived during the warm periods and had a harder time during cold periods. 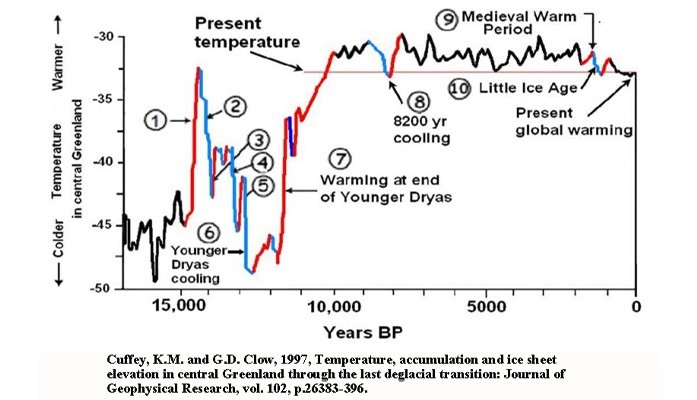 Kenneth Richard, writing on the NoTrickszZone blog, reviews several recent studies which show the dread two-degree limit has been exceeded many times during the warm and cool cycles of the Holocene.

During the Medieval Warm Period, wine vineyards flourished in Scandinavia and Russia at the same latitude (55°N) where polar bears roam today.

Earlier in the Holocene, when CO2 levels hovered around 260 ppm, vast forests extended all the way up to the coasts of the Arctic Ocean (Russia), suggesting temperatures were up to 7°C warmer than today.

The southern limits of Arctic sea ice (north of Greenland) extended 1000 kilometers further north of where sea ice extends to today (2007), as Arctic Ocean temperatures were 2-4°C warmer about 8500 to 6000 years ago.

Throughout the Northern Hemisphere (Austria, Canada, Iceland, Russia), summer air temperatures were about 3° to 5°C warmer than today between 10,000 and 8000 years ago, when CO2 values held steady at 260 ppm.

Permafrost that exists today in northern Sweden wasn’t present just a few hundred years ago, as the region was too warm to support permafrost until recent centuries.

Tree trunk remains located 600 to 700 meters atop the limits of today’s barren mountain treelines (northern Sweden) date to the Early Holocene, suggesting temperatures were 3-4°C warmer than today from about 9000 to 6000 years ago.

One claim of the climate alarmists is that sea level rise is accelerating and will wipe out coastal cities. Since Earth is currently warming from one of the cold periods, sea level is rising slowly at the rate of 1-to 3.4 millimeters a year (about the thickness of one or two pennies). The rate of sea level rise is cyclical, controlled mainly by solar cycles. If you start counting at one of the low points in the cycle, then, yes, the rate appears to be increasing. See my ADI article: The Sea Level Scam.

Carbon dioxide emissions and the “Greenhouse effect” are claimed as the chief villain in alarmist’s narratives. But, even if the entire world stopped emitting carbon dioxide, it would make a difference in global temperature of less than one degree Celsius by the year 2100. That’s because the Greenhouse hypothesis ignores convective heat transfer (weather) which shreds the greenhouse “blanket.”

See: Evidence that CO2 emissions do not intensify the greenhouse effect

Carbon dioxide emissions is the fake boogeyman. The UN admits that its real goal is to transform the global economy away from capitalism.

Back in 2010, Ottmar Edenhofer, a German economist and co-chair of the IPCC Working Group III, explicitly affirmed the economic objective: “Climate policy has almost nothing to do anymore with environmental protection… One must say clearly that we redistribute the world’s wealth by climate policy…”

In my opinion, most of the climate demonstrators have been sipping the “climate Kool-ade” and have become the “useful idiots” in the quest to transform the world economy.