All of this was revealed on Thursday by Stephen Richer who hopes to one day replace Fontes. Richer, a Republican lawyer in a well-established Phoenix law firm, uncovered the Secretary of State’s concerns when he received copies of internal emails through a Freedom Of Information Act (FOIA) request.

Now, Richer and others are calling for an investigation of Fontes and demanding that he reimburse the taxpayers for the cost of his mail-in ballot scheme.

AZGOP Chair Kelli Ward accused Fontes of having a history of showing “a blatant disregard for the law and a complete lack of respect for Arizona voters. We’ve seen it time and time again. In fact, Fontes has become a bipartisan headache, with leaders from both parties on record trying to talk Fontes off the ledge in the past before he could do more reckless damage to our election laws and norms, but to no avail.”

“Fontes appears to have either some warped hero complex, where he believes he can do no wrong, and must therefore always take the situation into his own hands – even when it’s not legally within his power to do so – or he truly does not understand the laws that govern our state. Both possibilities are deeply troubling and raise serious concerns about the handling and the integrity of our elections as long as someone like Adrian Fontes is in office.”

Richer claims that the documents he received from Hobbs “show that Adrian Fontes likely misused public funds in violation of state law and should be held individually liable.”

Richer points to A.R.S. § 35-196, which reads: “Any state officer or employee who illegally withholds, expends or otherwise converts any state money to an unauthorized purpose shall be liable , either individually or on his bond, for the amount of such money , plus a penal sum of twenty per cent thereof…” (emphasis added)

To receive a mail-in ballot, you must be on the Permanent Early Voting List (PEVL) or must request a one-time ballot from the Recorder’s Office.

Richer argues that the law is well-known but Fontes told his colleagues in mid-March that he would mail last-minute ballots to voters not on PEVL.

According to an article in the Arizona Capitol Times, “Fontes acted alone and planned ahead to mail out the ballots to voters with the intention that they would be in the mail before any legal action could be taken…”

Hobbs sternly responded to Fontes in an email, which reads in part:

“I want to reiterate what I communicated to you on the phone this morning. My Office’s position is that you do not have legal authority at this stage to mail a ballot to all voters who have not requested one. The lack of an express statutory prohibition is irrelevant. If your view were correct, counties apparently have had authority to conduct countywide all‐mail elections all this time. This is clearly not the law in Arizona …”

“In fact, just yesterday at 2:45 p.m., you tweeted: ‘If it were up to me, we’d have already mailed ballots to all our voters.’ Apparently, sometime between that tweet and this morning, you decided it is up to you , despite the fact that the Maricopa County Board of Supervisors determined otherwise.”

“We have communicated with Runbeck and they have assured us that your Office instructed them to print and hold ballots, but no ballots have been mailed. We made clear to Runbeck that our Office’s position is that if they mail any ballots at your direction today or in the coming days, they will be facilitating a violation of the law. “

Fontes was stopped ultimately by the Attorney General who obtained a temporary restraining order by the Maricopa County Superior Court.

The Board of Supervisors then ordered the secure destruction of the ballots Fontes unlawfully printed. Taxpayer funds were used for the destruction. 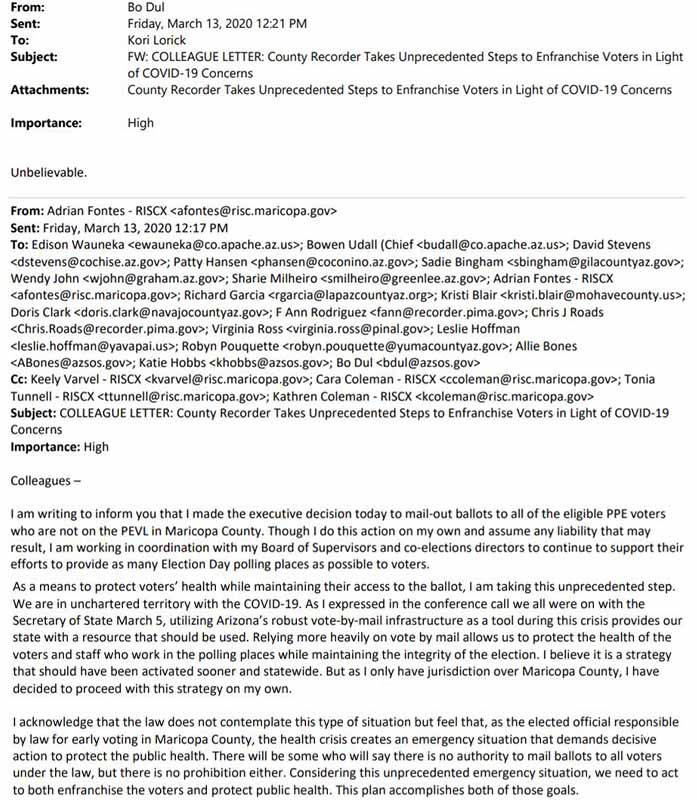 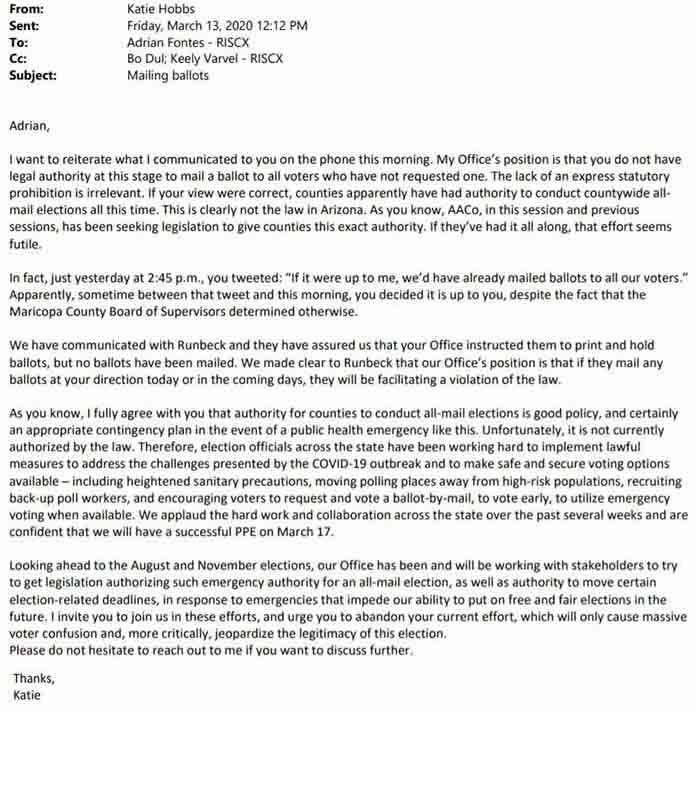