Questions are being raised about the decision by House Speaker Rusty Bowers and Senate President Karen Fann to secure the services of a firm controlled by former McCain camp operatives and funded by the Soros-funded Tides Foundation. Arizona Grassroots Advocates, headed up by Chad Haywood and John Seton, has been a source for controversy in Arizona politics over the years.

Arizona Grassroots Advocates, according to campaign finance records, received $30,000.00 from Arizonans for Second Chances, Rehabilitation, and Public Safety Committee in the First Quarter of 2020.  The Committee is funded by “Alliance for Safety and Justice Action Fund,” a project of Tides Advocacy. 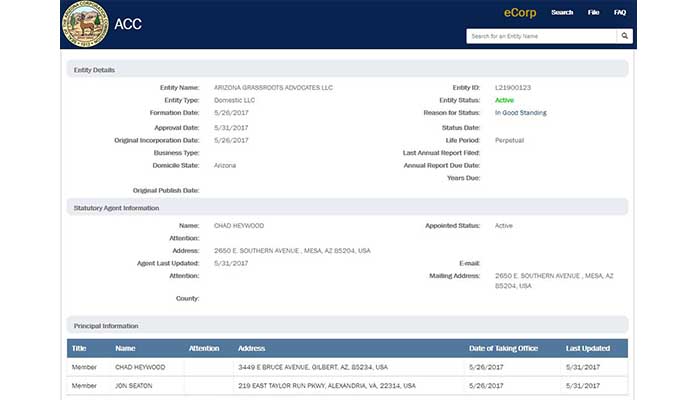 In March 2020, Andrew McCarthy described the effort by the Tides Foundation to elect progressive prosecutors such as Chesa Boudin, who like his compatriots believes that the “very act of policing, of enforcing the laws enacted by the people’s representatives, is an exercise in race-based persecution.” McCarthy argues that the movement’s ultimate goal is  “eliminate police departments. Not tame them. Not scale them back. Eliminate them.”

As we hear ad nauseum today; defund them.

For Republicans running on a “law and order” platform, the use of old McCain Machine operators is bad enough, but with President Donald Trump tweeting out “LAW AND ORDER” on a nearly daily basis, the apparent hypocrisy is too much.

One Capitol railbird told the ADI, “Fann and Bowers will say there was a committee that hired these guys, but everyone knows its Fann and Bowers calling the shots and they hired who they wanted. Now they have to win, because there isn’t going to be any appetite for Fann or Bowers as Minority Leaders.”

Another Republican Party activist said, “The McCain crew will always look after each other and find ways to make big money off of our Party efforts.  The problem is love going after other Republicans but usually lose to Democrats.  I’d be very nervous about the Republican majorities in the Legislature.”