PHOENIX – Jason Franklin’s personality had taken a dramatic turn. The former Arizona State University linebacker, often described as upbeat and social by his friends and family, was withdrawn.

He “would get lost in long, blank stares. He was not sleeping well. He was having memory problems,” his mother, Jan Franklin, later wrote of that time. “He had no money and couldn’t remember how to get more money out of his bank account. He would go for long walks to try and calm his head.”

On July 14, 2018, seven years after Jason Franklin realized his dream to play in the Pac-12 – only to suffer four concussions as a practice squad player – he took his own life. He was 26.

Two years after his son’s death, his father, Gregg Franklin, has filed a lawsuit against Arizona State and the NCAA, alleging that flawed concussion management protocols were a direct result of his son contracting the degenerative brain disease called CTE, for chronic traumatic encephalopathy. The suit claims the organizations “recklessly ignored these facts and failed to implement reasonable concussion management protocols to protect its athletes, including Jason Franklin.”

The July 13 suit raises questions about whether the NCAA, as the governing body for collegiate sports, protects its athletes from recurring concussions. The NFL did not acknowledge concussions were a medical issue for years before conceding in 2016 to a direct link between concussions on the field and degenerative brain disease.

The lawsuit, filed in U.S. District Court in Arizona, seeks class-action status to cover “all now-deceased individuals who participated in ASU’s football program between 1952 and 2015 and were diagnosed during life or post- mortem with Alzheimer’s disease, dementia, Parkinson’s disease, CTE, or any other significant neurodegenerative disorder or disease.”

Chris Nowinski, the co-founder and CEO of the Concussion Legacy Foundation, noted that college athletes, unlike NFL players, who have the NFL Players Association, are not unionized.

Changing that could decrease the number of concussions that occur in college football, said Nowinski, who played football for Harvard and wrestled professionally.

Is cheerleading a sport? Some concussion experts say it should be classified as one

“Considering that college football is giving people a degenerative brain disease, I wish there was more caring from the college football world about these athletes,” said Nowinski, whose foundation collaborates with Boston University, which is widely regarded as a leading institute for concussion studies. “Right now, there’s no long-term medical care – they’re not paid for the risk that they are taking with their brain.

“I feel like college football players are exploited because there is a huge money-making operation around them. Lots and lots of people have well-paying jobs because of the risk they are taking with their brain, and once they take that risk, the school is not going to be there to help them.”

Someone who has taken numerous hits to the head, often in football, hockey, volleyball, sledding and cheerleading, can develop CTE. The disease can have a major effect on a person’s thinking, memory, personality and behavior, according to studies by Mayo Clinic and others.

According to the lawsuit, Jason Franklin’s emotional and mental health deteriorated because of concussions he suffered while playing for ASU from 2011 to 2016.

Walking into an opportunity

Franklin played baseball and football for Chaminade College Preparatory School in Los Angeles, where he was an accomplished baseball player. But his heart was in football. He chose to walk on at ASU, where his hard work earned him a scholarship.

Out of high school, Franklin had scholarship offers from smaller schools, but he had always wanted to be part of something bigger. Jan Franklin said becoming an ASU athlete and getting to play in the Pac-12 was “his dream come true.”

In his time playing football at ASU, Franklin suffered just one of those four concussions before August 2014. Jan Franklin’s post said he then suffered three concussions over the course of a month. All four occurred on the practice field, the suit says.

Franklin, who had participated in a concussion study conducted by the Translational Genomics Research Institute, described the experience to Cronkite News in 2017. He said the possibility of a concussion was never on his mind when he went out on the field.

“It freaks you out at first because you do not think like that,” Franklin said. “I was 22, and I thought I was pretty indestructible, as most 22-year-olds do.”

Jan Franklin said that, before her son’s concussions, he was the happiest and funniest person she knew.

“Jason was the most social person I think I have ever met,” she said in a 2018 blog post for the Concussion Legacy Foundation. “He and I shared the gift of gab and the desire to entertain and engage everyone we met. Jason entertained everyone constantly, whether it was one-on-one or in crowds. He had his goofy impressions, crazy dance moves, amazing stories and hysterical, high-pitched laughs.”

Six months after his series of concussions, Jan Franklin wrote that Jason’s friends noticed he had changed, and she found him constantly agitated, anxious and adrift.

In the fall of 2017, the lawsuit alleges, “Jason became fixated on conspiracy theories regarding the Illuminati, culminating in a psychotic episode in which he angrily yelled at his parents and claimed to be Jesus. Then, in April 2018, Jason experienced a psychotic episode during which he believed his parents were trying to kill him. Jason was then hospitalized against his will.

His mother recounted the terrifying experience.

“We took Jason back to our house in California,” she wrote. “He ate a little and then went to sleep. Not too long afterwards, Jason woke up and started saying his dad was going to kill him. He said he heard us talking. He started to get more and more agitated. He was enraged and telling us he would kill us first so we couldn’t kill him. We kept telling him that we loved him and
would never hurt him.

“Given Jason’s size and strength, I knew we could be at risk, so I dialed 911. The police talked to Jason and decided to put him on a 5150 hold, which is a three-day hold to ensure a person is not violent or suicidal.”

He got out and went home to Arizona. His problems persisted. He complained of serious headaches and siren-like sounds in his head.

A month later, a police officer showed up at his parents’ front door in California with the tragic news about their son. 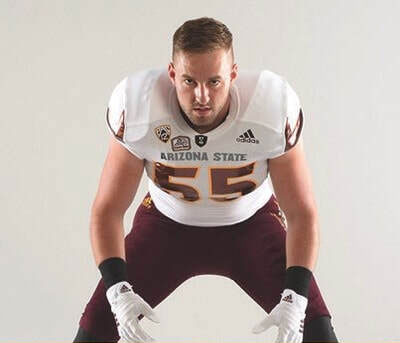 When he was young, Jason Franklin dreamed of playing in the Pac-12. He joined the ASU football team as a walk-on and was later awarded a scholarship. (Photo courtesy Franklin family)

Gregg Franklin, in the lawsuit, alleges that if his son had been told more about the long-term effects of concussions, that he would have stopped playing.

“ASU could certainly have required football players like and including Jason Franklin to undergo more intensive education about concussions, but it did not. Nor did the NCAA do anything to ensure that ASU would,” the lawsuit states.

ASU has a set of concussion guidelines to avoid traumatic brain injuries for all its athletes. The lawsuit claims the university did not follow those guidelines.

“As compared to Jason Franklin and other ASU football players,” it states, “the NCAA and ASU were in a superior position to know of and mitigate the risks of sustaining concussions and other (traumatic brain injuries) while playing football at ASU. They failed to do so.”

Concussion concerns rise in other sports

Concussions have become a concern in many sports, with protocols developed in youth sports, at the college and professional level for activities ranging from football to volleyball. The National Institute of Neurological Disorders and Stroke called traumatic brain injury a “major global health problem.”

In 2013, the NFL reached a $765 million settlement over concussion-related brain injuries among its 18,000 retired players after thousands of athletes, including many suffering from dementia and depression, sued the league.

Since then, the NFL has taken steps to decrease the number of hits to the head, such as eliminating various types of high-contact drills, Yahoo Sports reports.

NCAA concussion protocols require universities to educate their athletes on the dangers of concussions and limit exposure to head trauma, including “keeping the head out of blocking and tackling,” making sure helmets and other equipment meet safety standards and are not used as a weapon and making sure practices and competitions meet ethical standards.

College athletes have filed lawsuits as well, including several on the same day in 2016, against the Pac-12 and several other major football conferences.
“To me, lawsuits from former college players are interesting because college football players are getting CTE,” said Nowinski, who was one of the first to make CTE part of a public discussion. “In our experience at Boston University, more than two out of three college brains that we get have CTE. Playing football in college can give you CTE or make your CTE worse.”

Nowinski said that a study of 266 brains of football players found that their odds of developing CTE increased every 2 1/2 years.

Establishing a legacy of education

After Franklin died, his mother had his brain sent to Boston University, where it was analyzed for CTE. The results showed he had cavum septum pellucidum, a defining feature of CTE. He was suffering from Stage 2 CTE with nine lesions on multiple areas of his brain, according to Jan Franklin’s post.

“With CTE, we didn’t know much about it when we started our collaboration with Boston University,” he said. “When we started, there were 48 known cases of CTE in the world. We’ve now hit 1,000 brains going in, at about two-thirds of them being positive for CTE. We’ve rewritten the books on what we understand about how these hits to the head lead to brain disease.” 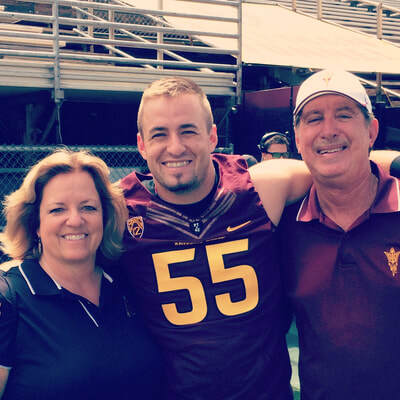 Former Arizona State football player Jason Franklin, center, was close to his parents, Jan and Gregg. Gregg is suing ASU and the NCAA, alleging that flawed concussion management protocols were a direct result of his son contracting CTE. (Photo courtesy of the Franklin family)

“I do think there needs to be a dramatic shift in how college football players are treated,” he said.

And if athletes were more honest about their post-concussion symptoms, Nowinski added, it could save them from suffering long-term mental and physical injuries.

“Athletes would do very well for their own health if they were honest about concussions,” he said. “That’s what we try to impress upon them, is that, if you’re not honest and you keep playing, you really could ruin your brain.”

Jan Franklin, in her post, says she is struggling with her feelings on football. She can’t eliminate football entirely from her life, she said, because that’s not what Jason would have wanted.

“Football is now a conundrum for me,” she wrote. “We have always loved to watch the sport. But, given that football was a major contributor in my son’s death, how can I still love and watch this game?”

She decided on her son’s legacy, and her mission is to help others better understand, diagnose and treat CTE.

About Cronkite News 2927 Articles
Cronkite News is the news division of Arizona PBS. The daily news products are produced by the Walter Cronkite School of Journalism and Mass Communication at Arizona State University.