PHOENIX – Food tends to bring back fond memories for most people. For Arizona Cardinals cornerback Patrick Peterson, the scent that wafted from his grandmother’s kitchen every Sunday evening when Peterson was a child still brings comfort.

His grandmother may not be in the kitchen at the Valley’s United Methodist Outreach Ministries New Day Centers, but another chef is recreating Peterson’s favorite meal for residents who are staying at the shelters.

Chef Rose Witt, the Residential Dining Chef for the past eight years at UMOM, produces over 6,000 meals per week despite having only a limited team supporting her due to COVID-19 restrictions.

“(Chef Rose) came from St. Mary’s Food Bank, where she was a chef instructor for 12 years,” said Dina Altieri, director of culinary enterprises at UMOM. “What she brings to our kitchen is, well, she’s just an amazing chef.”

In a dining hall filled with only the sounds of serving spoons hitting plates, Rose continues to push meals out to families living in the community each morning, noon and night.

“This is her jam,” Altieri said. “If you’re Rose, you feel like you were born to feed people.”

The menu tends to change on a weekly basis and it comes from the chef’s decisive palate. However, every Tuesday for the next calendar year the creations will be inspired by the appetite of a local, star cornerback.

The three-time All-Pro launched “P2 Tuesdays” to help fight hunger and homelessness in the Phoenix community. His goal is to bring the same comfort meal he was given growing up in Florida to those who are not fortunate enough to have a consistent roof over their head and a hot meal on their plate.

“His foundation really tries to give back to the community,” Altieri said. “Living in Arizona and being a local resident, he sees the homeless and sees homelessness as an issue that he wants to help fix — like all of us. Our mission is to end homelessness.”

More than 400 people will receive Peterson’s favorite meal at UMOM every Tuesday. It’s as if Peterson has figuratively swapped his helmet for a chef’s hat.

“Food for him and flavor memory for him conjures up comfort,” Altieri said. “The feelings he had growing up bring him back. He loves UMOM’s mission but was particularly drawn to the fact that our families here are not just men and women but children, toddlers, teens.”

“P2 Tuesdays” is nothing new to Peterson and the relationship he has with his community. The two-time Walter Payton Man of the Year Award nominee founded the “Patrick Peterson Foundation for Success” in 2012. The foundation focuses on providing low-income and inner-city youth with opportunities to attain their dreams and reach their potential. 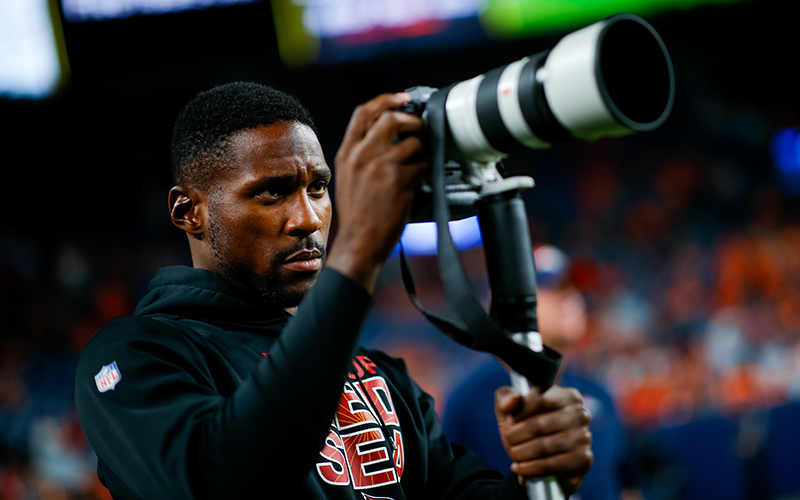 Patrick Peterson is focused on more than just football. He is determined to help feed the homeless. (Photo by Justin Edmonds/Getty Images)

With COVID-19’s impact on the community of Phoenix, especially the less fortunate, Peterson has made it a consistent mission to be involved — his partnership with UMOM is his latest venture.

“Phoenix has become home for myself and my family for the last decade and I pledge to do everything in my power to support those in Phoenix whose lives have been affected by the COVID-19 pandemic,” Peterson said in a press release.

Communities worldwide have endured physical, financial and emotional hardships because of the pandemic. For Peterson, it was an easy decision to jump into his local neighborhoods and lend a hand.

“Because you see it each and every day on the news,” Peterson said. “Jobs are still not opening, people are continuing to get laid off; therefore, if you get laid off from your job, there’s a good opportunity you won’t have funds to make ends meet to provide a meal.”

On the first “P2 Tuesday” of the year, Jarvis Johnson, a resident at UMOM for the past four months, wore his Cardinals hat and shirt as he strolled through the dining hall, sparking conversations with strangers and neighbors. The 30-year-old father of two is spending his final week at UMOM by enjoying Peterson’s favorite dishes.

“It means a lot,” Johnson said in an interview with Cronkite News. “I have my wife and I have two kids here. For them to be able to get a really good meal … anytime you take care of my children, my children are the most important things to me … it’s really a blessing.”

Even with the uplifting news of Johnson finding a new home for his young family, leaving the community he has come to love is bittersweet.

Life changed in a flash for Johnson. Last October, he was in a car accident and ended up in a coma for two weeks. He said he and his family went to his mother’s house for some time but ended up at UMOM.

“I had a lot of pride coming in here,” Johnson said. “I didn’t want to come in here, [but now] I’m not trying to get out of here. I can’t be selfish because more people are out there waiting for a spot. They’re waiting for my room.”

Adversity during a pandemic has unique challenges. Johnson and his family had trouble finding an apartment because of COVID-19 restrictions — housing availability was stagnant.

“This place has really helped me out,” Johnson said of UMOM. “I’m doing better, they want to send me out tomorrow. I’m excited but I’m also sad. UMOM is the place. They’re helping so many people. They don’t have to, but they’re doing it … I’m really going to miss this place.”

Peterson, meanwhile, found an extra reason to become involved with UMOM — inspiring youth to keep them motivated through stressful times.

“I know there’s a lot of kids in many, many households around America looking up, not only wanting to be me, but other athletes and other people they inspire to be like,” Peterson said. “I just want to continue laying down the pavement the right way to where the younger generations behind me can do the same thing going forward.”

As for Johnson and his two kids, it was and continues to be an uphill battle.

“My kids don’t understand what’s going on,” Johnson said. “How do you explain to a 5-year-old or a 6-year-old? That was one of the hardest things. I didn’t want to tell nobody I was at the shelter, but I had to let my pride go.”

Peterson plans to incorporate new meals each Tuesday instead of sticking to his favorite comfort food of fried chicken, mac & cheese, and more.

“My mom used to always tell me that ‘whenever you make it big, get older, you’re going to be a great father because you’re a great giver — you have a great heart,’” Peterson said. “I always had dreams of being in the NFL, always had dreams of making the big bucks. But even if I didn’t, I always wanted to find a way to help people that are in need.”