The several recent hurricanes making landfall in the southeastern U.S. have spawned claims that they are the result of global warming. However, real data show that these hurricanes are consistent with natural variation. The following graphs were constructed by meteorologist Dr. Ryan N. Maue, who has recently been appointed as chief scientist at NOAA, the National Oceanic and Atmospheric Administration. See his website: http://climatlas.com/tropical/ 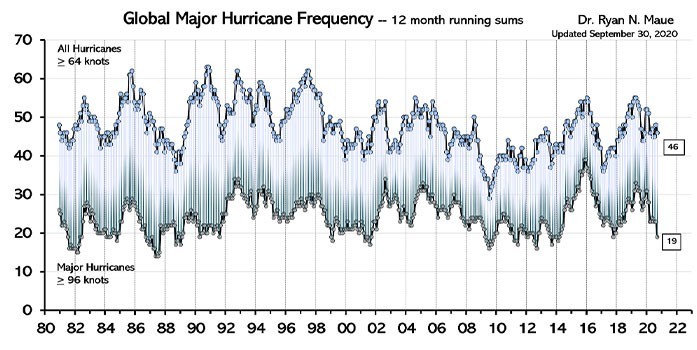 Hurricane strength is measured as “accumulated cyclone energy” ACE. In the graph below, the upper line is global, the bottom line is for the northern hemisphere. 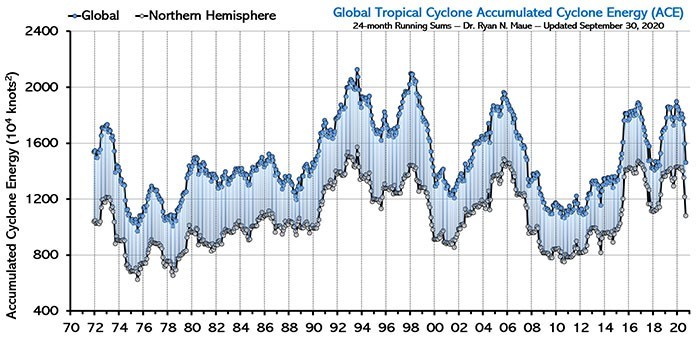 “Tropical cyclone accumulated cyclone energy (ACE) has exhibited strikingly large global interannual variability during the past 40-years. In the pentad since 2006, Northern Hemisphere and global tropical cyclone ACE has decreased dramatically to the lowest levels since the late 1970s. Additionally, the frequency of tropical cyclones has reached a historical low. Here evidence is presented demonstrating that considerable variability in tropical cyclone ACE is associated with the evolution of the character of observed large-scale climate mechanisms including the El Nino Southern Oscillation and Pacific Decadal Oscillation. In contrast to record quiet North Pacific tropical cyclone activity in 2010, the North Atlantic basin remained very active by contributing almost one-third of the overall calendar year global ACE.”

The graph below shows the number of land-falling hurricanes since 1970. The dark bars are category 1&2 hurricanes; the grey bars are hurricanes of category 3 and above. 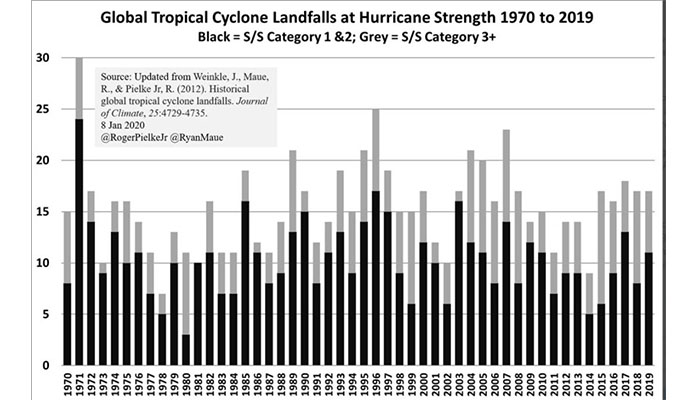 A Review of the State of Climate Science

Why Hurricanes Can’t Be Blamed On Global Warming