Roberto “Dr. Cintli” Rodriguez told his audience of mostly press members that he told the teachers of the Tucson Unified School District’s Mexican American Studies program to send the students who were suspended for protesting the suspension of the MAS classes to send them to him. He would teach them. The six students that showed were mostly junior high students.

District insiders who were concerned about the use of young students. They claimed that the district administration was ignoring their concerns. They asked the community to get involved.

Only after receiving a letter signed by over one hundred people demanding protection for students and an investigation into the exploitation of students did the district’s Superintendent John Pedicone write to Dr. Tony Estrada, the head of the Mexican American Studies Department at the University of Arizona. He requested Estrada’s assistance, noting that “Professors from the Mexican American Studies Department together with a student organization, encouraged students to not attend school and to participate in a day-long activity at the El Casino Ballroom, that was advertised as Join us for day of ethnic studies taught by U of A professors with performances by artist and commu8nity members. (Free food+Entertainment+Education=Time well Spent.)”

Pedicone told Estrada that “encouraging students to not come to school is counterproductive to the objectives we all share for students.”

Pedicone admitted in his letter that “It is likely that faculty will respond by saying they were not the ones to create this event, buy it is also clear that they had a role in the organization of this effort. This is not the first time, the Superintendent has admitted that adults were behind the students’ actions. After the student takeover of a Governing Board meeting last Spring, the Superintendent wrote Governing Board member Judy Burns that the students were “well-meaning and manipulated.

Only Governing Board member Michael Hicks has publicly expressed concern for the manipulation of kids for political purposes.

Instead of telling the public the truth about its educators, he began a PR blitz. He advised the Governing Board members, “The Cabinet members began to speak at Rotary Clubs throughout the Region. I assigned district administrators to assume responsibility for getting our message out to the community while introducing business and other leaders to the quality of the administrators who run our district.” (As of the time of this article’s posting, he didn’t address the concerns in the letter community members sent.)

In the Board letter Pedicone once again admitted that adults are manipulating students, “when we leave these meetings we feel as though students understand and yet, when they return after the weekend, our messages seem to have been ignored or filtered through other conversations by people outside of our district.”

The district’s policy to date has been to say that the classes were compliant with state law, the state law was flawed. The district has refused to admit that any other concerns expressed by the public, or Superintendent of Public Instruction Huppenthal were valid. 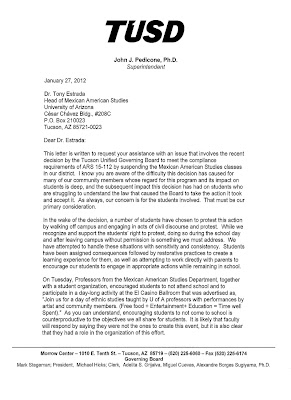 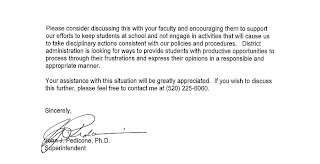