On Monday, the UN’s IPCC Working Group II published is latest volume of science fiction, “Impacts, Adaptation, and Vulnerability” to climate change. It is filled with scary stories and dire predictions.

One of their claims is: “Based on many studies covering a wide range of regions and crops, negative impacts of climate change on crop yields have been more common than positive impacts (high confidence)…Climate change has negatively affected wheat and maize yields for many regions and in the global aggregate (medium confidence). Effects on rice and soybean yield have been smaller in major production regions and globally, with a median change of zero across all available data, which are fewer for soy compared to the other crops.”

In effect the IPCC claims that climate change has already decreased yield of wheat, corn, and soybeans. Let’s look at the real data. 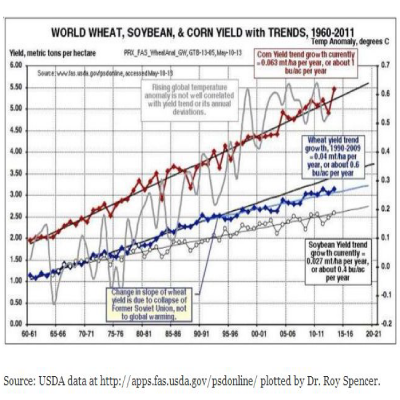 Oops, real data shows that yields of these commodities has been steadily increasing. The slight dip in wheat yields coincides with the collapse of the former Soviet Union in the early 1990s.

Not by coincidence, just last week another group released a major new report on the biological impact of climate change.

The Nongovernmental International Panel on Climate Change (NIPCC), a coalition of the Center for the Study of Carbon Dioxide and Global Change, Science and Environmental Policy Project (SEPP), and The Heartland Institute has just released its new volume of real climate science that opposes the science fiction of the UN’s IPCC. The documents can be obtained from the NIPCC main website:


The new report concerns the biological impact of climate change. The full report is more than 1000 pages (19.5Mb) and available here:

There is also a 20-page Summary for Policy Makers here:

To save you some reading, here is a condensed summary of their findings which are supported by thousands of peer-reviewed papers.

• Atmospheric carbon dioxide is not a pollutant. It is a non-toxic, non-irritating, and natural component of the atmosphere. Long-term CO2 enrichment studies confirm the findings of shorter-term experiments, demonstrating numerous growth-enhancing, water-conserving, and stress-alleviating effects of elevated atmospheric CO2 on plants growing in both terrestrial and aquatic ecosystems.

• The ongoing rise in the air’s CO2 content is causing a great greening of the Earth. All across the planet, the historical increase in the atmosphere’s CO2 concentration has stimulated vegetative productivity. This observed stimulation, or greening of the Earth, has occurred in spite of many real and imagined assaults on Earth’s vegetation, including fires, disease, pest outbreaks, deforestation, and climatic change.

• There is little or no risk of increasing food insecurity due to global warming or rising atmospheric CO2 levels. Farmers and others who depend on rural livelihoods for income are benefitting from rising agricultural productivity throughout the world, including in parts of Asia and Africa where the need for increased food supplies is most critical. Rising temperatures and atmospheric CO2 levels play a key role in the realization of such benefits.

• Terrestrial ecosystems have thrived throughout the world as a result of warming temperatures and rising levels of atmospheric CO2. Empirical data pertaining to numerous animal species, including amphibians, birds, butterflies, other insects, reptiles, and mammals, indicate global warming and its myriad ecological effects tend to foster the expansion and proliferation of animal habitats, ranges, and populations, or otherwise have no observable impacts one way or the other. Multiple lines of evidence indicate animal species are adapting, and in some cases evolving, to cope with climate change of the modern era.

• Rising temperatures and atmospheric CO2 levels do not pose a significant threat to aquatic life. Many aquatic species have shown considerable tolerance to temperatures and CO2 values predicted for the next few centuries, and many have demonstrated a likelihood of positive responses in empirical studies. Any projected adverse impacts of rising temperatures or declining seawater and freshwater pH levels (“acidification”) will be largely mitigated through phenotypic adaptation or evolution during the many decades to centuries it is expected to take for pH levels to fall.

• A modest warming of the planet will result in a net reduction of human mortality from temperature-related events. More lives are saved by global warming via the amelioration of cold-related deaths than those lost under excessive heat. Global warming will have a negligible influence on human morbidity and the spread of infectious diseases, a phenomenon observed in virtually all parts of the world.

My comment: The IPCC, itself, is the greatest threat to food security because the IPCC wants to reduce the amount of CO2, the greatest plant fertilizer.

Within the UN’s new report, the IPCC seems to be backing off some prior claims, for instance, see,

UN admits that growing crops to produce biofuel is bad for environment.

The IPCC has claimed for years that global warming is threatening thousands of animal and plant species with extinction. But now the IPCC says it is no longer so certain. The second part of the IPCC’s new assessment report admits that there is no evidence climate change has led to even a single species becoming extinct so far. [Source]

So maybe we don’t need that new department at the University of Arizona after all.