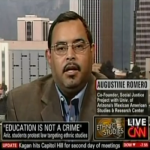 Just when you thought Superintendent H.T. Sanchez could not do more to make TUSD the laughingstock of the country, he makes a move that few would have anticipated; the character, who has come to be known as the Burrito Man, is now the new principal of Pueblo High School.

Auggie Romero, who brags of his practice of bribing hungry students with burritos, was named the new principal of the struggling Pueblo High School. Romero has virtually no site administration experience.

Instead, he has spent the past few years delivering his standard speech extolling the value of burritos in transforming students into change agents and developing the District’s multi-cultural curriculum based on his “Barrio Pedagogy” which he developed with Julio Cammarota. The duo’s work is based on the works of Peter MacLaren, Christine Sleeter, David Andrade and other Critical Race Pedagogy proponents.

Few District insiders understand what it is Sanchez is trying to accomplish, but they do recognize that the morale is at an all time low.

Division is his specialty. Romero, a close personal friend of Board member Adelita Grijalva, wrote in his work titled “Culture as a resource: Critically Compassionate intellectualism and its struggle against racism, fascism, and intellectual apartheid in Arizona,” The critical educator cannot wait for the dominant group or the American structure to correct itself. The critical educator must understand that the oppressors cannot see the nature of their ways. Given this understanding, it is my belief that the dominant group is incapable of critical reflection or redemptive remembering….”

Romero’s contempt and the solution he seeks is the subject of his and Cammarota’s recently released book, Raza Studies: The Public Option for Educational Revolution.

Romero has brought a certain amount of humor to the otherwise tragic TUSD. His Burrito Man fame was the subject of a spoof interview of former Mexican American Studies teacher Curtis Acosta and Governing Board member Michael Hicks on the Daily Show. Jon Stewart’s crew managed to turn concerns about using food to entice hungry students into a certain belief system into a funny ten minutes.

Only the writers of the Daily Show are skilled enough to make the exploitation of hungry children funny.

Where is the social justice in TUSD’s MAS program?