The Environmental Protection Agency is proposing a more stringent National Ambient Air Quality Standard for ground-level ozone. The EPA is considering lowering the standard from the current 75 parts per billion (ppb) to 60 ppb.

“Ground-level ozone is formed through a chemical reaction when nitrogen oxides (NOx) and volatile organic compounds (VOCs) interact with sunlight. Emissions from power plants, industrial facilities, automobiles, gasoline vapors and solvents are all sources of NOx and VOCs. Natural sources, such as plant life and fires, also contribute to the formation of ozone; today, given how much ozone levels in the United States have already been reduced, a significant portion of a given area’s ozone concentration is made up of natural background ozone and ozone that has traveled from other states and, increasingly, from overseas.”

The National Association of Manufacturers has commissioned a study to determine the impact of such a move. The quote above is from that study. The study found that the proposed rules would:

Result in 2.9 million fewer job equivalents per year on average through 2040;

Cost the average U.S. household $1,570 per year in the form of lost consumption;

Increase natural gas and electricity costs for manufacturers and households across the country.

In addition to the costs cited above, the study found that restrictions to new natural gas production from tighter ozone regulations, in combination with the costs to reduce emissions, could reduce the present value of GDP by nearly $4.5 trillion through 2040, result in a loss of 4.3 million job equivalents per year and cost households $2,040 annually.

Read the executive summary of the study here.

The study also found that the technology to achieve the proposed standards does not yet exist.

The map below shows that most of the U.S. (and most of Arizona) would not be in compliance with the proposed regulations. 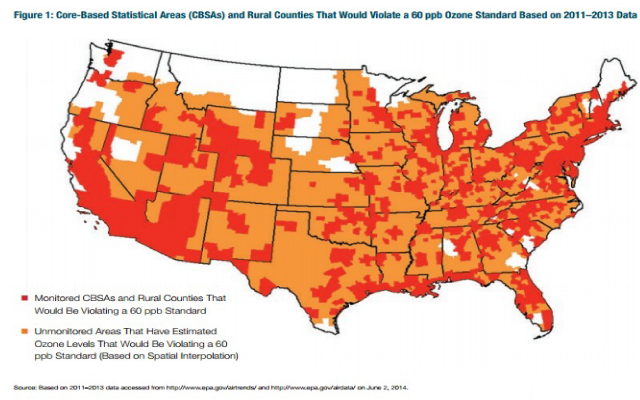 The EPA has still not even fully implemented the existing 75 ppb standards, yet is proposing even stricter standards. The EPA has presented no credible science to show that even the existing standard has any discernable benefit. EPA is clearly a rogue agency out of touch with reality.

EPA targets wrong cause of haze in Grand Canyon

The EPA is destroying America