Exploration and development of A-bed replacement ore bodies at the Magma mine during the 1950s resulted in the discovery of the east-northeast-trending North Boundary fault zone in 1959. This major, previously unknown structure dropped strata in its southern wall by at least 3,000 feet. Entirely concealed by post-mineral volcanic cover, the North Boundary Fault juxtaposes Cretaceous volcaniclastic and epiclastic sedimentary rocks in its southern wall against Precambrian and Paleozoic sedimentary strata and diabase in its northern wall. Furthermore, this structure is locally mineralized, strongly suggesting it served as the conduit for the mineralizing solutions that formed manto-style replacement ore bodies in its northern wall.

Although evidence for a porphyry copper target had been recognized in the area under the volcanic plateau northeast of the Belmont mine as early as 1972, Magma Copper confined its exploration efforts over the next decade to the search for additional vein and replacement deposits because no known porphyry copper deposits in this region would be economic at the depths indicated at Superior.

One of the exploration targets during the 1970s was the Paleozoic section located in the southern wall of the hypothetical South Boundary fault, which was thought to be a good candidate to host replacement ores similar to those being mined adjacent to the North Boundary fault. Although underground exploration of the Cretaceous strata within the downthrown structural block south of the Magma No. 9 shaft failed to reach the South Boundary Fault, it resulted in the discovery of the First South Vein in 1971 and Second South Vein in 1976-1977.

A surface exploration program designed to search for the hypothetical South Boundary Fault focused its attention on the mineralized veins and carbonate rocks that crop out at the Belmont mine, located about 10,000 feet south of the Magma vein. This work included surface geologic mapping, geophysical surveys and sampling of the east trending veins that crop out below Apache Leap, as well as surface drill holes designed to test favorable carbonate replacement horizons south of the presumed location of the south boundary structure. Five drill holes designed to test favorable stratigraphic horizons east of the Belmont mine and beneath the post-mineral volcanic cover on the plateau were completed between 1973 and 1981. Although this program confirmed the presence of narrow manganese oxide veins and oxidized replacement horizons within the Paleozoic strata, no economic mineralization was found.

Exploration proposals for a fence of surface drill holes designed to bracket the southern boundary of the Cretaceous volcaniclastic sediments was initially made in 1976, again in 1979 and in 1980. However, these exploration proposals were not funded. With the closure of the Magma mine in August 1982, all exploration activities ceased.

After the Magma mine resumed production in September 1990, exploration efforts resumed in two areas. Like earlier exploration programs, the underground program focused its search for additional vein and replacement ores that could be easily incorporated into the Magma mine plan. The surface drilling program resumed Magma Copper’s earlier efforts to bracket the hypothetical South Boundary Fault and the examination of the mineral potential of its southern wall. As a part of this effort a north-south fence of four deep surface drill holes were proposed to be drilled south of the No. 9 shaft.

The first drill hole (MB-9) of this surface program was collared about 6,300 feet southeast of the No. 9 shaft in September 1991 and completed to a depth of 3,267 feet in January 1992. The bottom 612 feet of this drill hole encountered pre-mineral Cretaceous volcaniclastics beneath the post-mineral cover that were altered to sericite-pyrite assemblage with supergene chalcocite coating the pyrite. Collared about 1,400 feet south of MB-9, drill hole MB-11 also encountered similarly altered and mineralized Cretaceous volcaniclastics in July 1992. Although not considered ore, Magma geologists recognized this altered and mineralized rock as clear evidence of proximity to a porphyry copper system.

After a 33-year search, the South Boundary Fault that forms the southern limit of this structurally down-thrown fault block of Cretaceous volcaniclastics was finally discovered during the summer of 1992. Later drilling delineated this structure during 1995, confirming earlier studies that showed it had also served as a conduit for ore-bearing solutions. Although oxidized manto-type replacement bodies were also encountered in the Paleozoic strata located in the south wall of this structure, no economic mineralization was identified at this time.

By the summer of 1994, the focus of Magma Copper’s exploration program changed from one of defining reserves to sustain production to one of identifying new resources that could sustain production while ores along the Southern Boundary Fault could be defined and developed. In October 1994, a sub-horizontal drill hole (S27E) was collared at sea level and directed southeast from the southernmost underground workings in the Magma mine below the bottom of surface drill hole (MB-9), which had been completed in January 1992. Completed in February 1995, this 3,648-foot underground drill hole encountered a 1,575-foot interval of pervasive quartz-sericite-pyrite altered Cretaceous volcaniclastics, which assayed 0.56% copper, marking the geologic discovery of the Magma porphyry copper system at Superior.

Underground drill hole S27H bottomed in a zone of secondary biotite alteration with stockwork chalcopyrite-molybdenite veining that assayed 1.95% copper and 0.036% molybdenum over an interval of 141 feet. This intercept represents the economic discovery of the Magma porphyry copper system at Superior that was later renamed the Resolution copper deposit. At the conclusion of this effort, it was decided to de-emphasize their search for high-grade veins, skarns, stringer zones and targets associated with the South Boundary Fault. Future efforts would be focused on examining the area’s bulk-tonnage porphyry copper potential.

Despite these high-grade intercepts at its Magma porphyry copper target, BHP Copper decided to abandon the Magma mine in May 1998, again allowing its underground workings to flood. It appears the decision to abandon the Magma mine was based on a number of factors including: a falling copper price ($0.785/lb), limited data on a partially defined deep resource (4,900 to 7,000 feet), lack of suitable infrastructure to exploit this resource and the on-going costs related to maintaining the project.

After learning of this high grade, but deep discovery, Kennecott Exploration, a wholly-owned subsidiary of Rio Tinto, became interested in the Superior mining district in September 2000. After completing a due diligence program, they entered an agreement with Broken Hill Proprietary Company Ltd. in April 2001, which allowed them to earn a 55% interest in the Superior project by spending US $25 million over the next six years. Broken Hill Proprietary Company Ltd. and Billiton plc merged to form BHP Billiton in June 2001. In July 2001, Kennecott commenced a deep exploration drilling program that was designed to outline the porphyry copper discovery at Superior, which underlies approximately 3,000 to 4,600 feet of barren post-mineral cover.

As a cost-savings measure, this program employed large mud-rotary drill rigs to drill and case mother holes to a depth of approximately 3,300 feet. Following the completion of the mother hole, core sampling of the mineralized zone began. After completing a vertical core hole beneath each pre-collared mother hole, directional drilling techniques were employed to drill a multiple radiating pattern of daughter holes from each mother hole. By January 2003, this exploration effort had established continuity of mineralization over an area measuring at least 3,300 feet in diameter.

In March 2004, Rio Tinto earned its 55% interest in the Superior property and officially took over as its operator in May 2004. The joint venture partners, Rio Tinto and BHP Billiton formed Resolution Copper Mining LLC to evaluate, design, permit, construct and operate its project in Superior, Arizona.

Following the completion of studies designed to evaluate the feasibility of employing block-caving techniques at this site in 2002 and 2005, an in-fill delineation drilling program resumed to gain a better understanding of the geology, distribution of the mineralization and geotechnical character of this deep porphyry copper system. As of January 2012, 76 core holes had been completed from 16 drill sites.

Centered approximately 4,700 feet southeast of the Magma No. 9 shaft, this high-grade porphyry copper resource apexes at a depth of approximately 4,900 feet, covers an area of about 400 acres and ranges up to 2,000 feet in thickness. As of December 31, 2014, it was reported to contain an inferred resource of 1.947 billion short tons, averaging 1.51% copper and 0.035% molybdenum, based on classification criteria published by the Australian Joint Ore Reserves Committee (JORC). 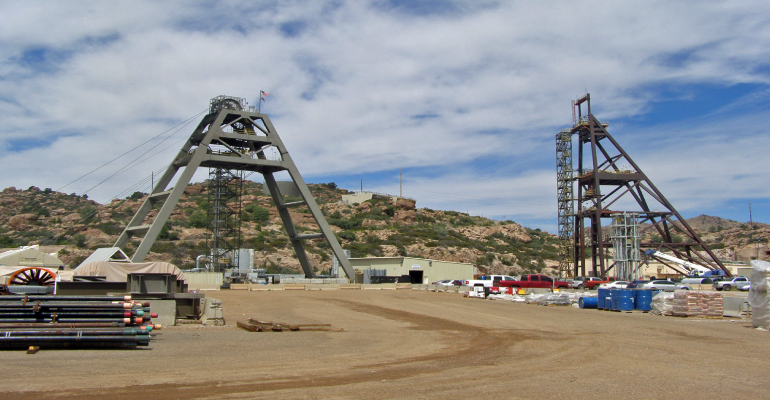 In preparation of sinking the No. 10 shaft, underground work was initiated to rehabilitate and extend the Never Sweat Tunnel in September 2006.  Pumping water from the underground mine workings, which had been abandoned since May 1998, commenced in March 2009.  This water is treated at a state-of-the-art plant prior to being delivered to the New Magma Irrigation and Drainage District, where it is blended with Central Arizona Project water and used to irrigate alfalfa, cotton, turf and small grains.

Development of the No. 10 shaft, located immediately south of the No. 9 shaft at the East Plant site, began in February 2007 with the construction of the collar set up.  The actual sinking of this 28-foot diameter shaft commenced in January 2009.   It was completed to a depth of 6,943 feet on November 18, 2014, making it the deepest single-lift shaft in the United States.  With the Resolution Copper project currently in the prefeasibility stage, the successful sinking of the No. 10 Shaft enables it to more efficiently advance to final completion.

Acknowledgments – Information gained through discussions with Donald Hammer and Ken Krahulec about various historical aspects of the Superior mining district have been very enlightening.  Thank you for your assistance in preparing this paper.

Donald Hammer’s knowledge of the Superior mining district was gained through many years of working in the area, where he began his professional career as a geologist in 1958.  His contributions made over nearly four decades exploring the area, as an employee of Magma Copper and Newmont and later as a consultant, played a significant role in the 1995 discovery of the Resolution Copper deposit.

Ken Krahulec’s experience in the Superior mining district was gained from his involvement with Kennecott’s due diligence program and their early evaluation of the Resolution porphyry copper system.

I thank Cori Hoag, Donald Hammer and Ken Krahulec for editing a rough draft of this paper.  Their comments have greatly improved its presentation.

Copyright © (2015) by David F. Briggs.  Reprint is permitted only if the credit of authorship is provided and linked back to the source.

History of the Magma Mine, Superior Arizona

History of the Silver King Mine, Pinal County, Arizona

Apaches Question Actions of their Leadership

America Needs to Move Forward Instead of Dwelling on Our Past

Exposing the Myth:  Resolution Copper’s Connection with the Islamic Republic of Iran

Congressman Grijalva Attempts to Undermine Our Economy and National Security