Verdins are 3.5 to 4.5 inches long. The adults, both male and female, have a gray back, white underparts, a yellow head and throat, and a reddish patch at the shoulder of the wings. Immature Verdins are light-gray throughout.

According to the Arizona-Sonora Desert Museum (ASDM), the Verdin is “among the most characteristic birds of the desert, and it has one notable distinction: it is not closely related to any other bird in the western hemisphere. For a while it was placed, uneasily, in the same family as the chickadees, which it resembles in size and in hyperactive behavior. Scientists now believe that its closest relatives are several species of small, plain birds found in Europe, Asia, and Africa.” 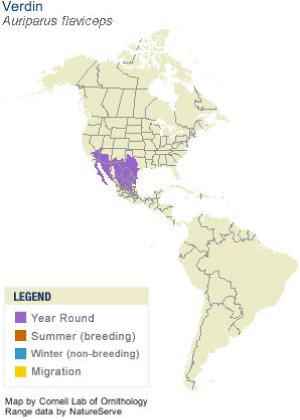 ASDM: Verdins are “Most common in the Sonoran Desert and mesquite bosques at lower elevations; also common in many southwestern urban areas. Verdins move and behave much like chickadees, flitting about singly or in pairs in search of food, often hanging upsides down to reach the underside of leaves. They are generally tolerant of people except during the nesting season. The diet consists mainly of insects but small spiders, berries, small fruits, and sometimes seeds are also taken. This bird also drinks nectar and sugar water, as people that have hummingbird feeders hung out know all too well.” Yes we do.

“The male may build several bulky twig nests before the female chooses one in which to lay her three to six pale green, red-brown dotted eggs. These large oval or spherical nests are placed rather far out on branches and may last many years in the dry desert environment. The entrance to the nest often faces prevailing winds, possibly an adaptation to the high temperatures of their desert habitat. Incubation takes about 10 days and the young are ready to leave the nest about 21 days after hatching, although they return to the nest at night.”

The nests are generally spherical with an entrance low on the side. They build one nest as the nursery and another for resting. This is much like cactus wrens which also build multiple nests.

According to the Cornell Lab of Ornithology: Roosting nests are much smaller than breeding nests. “The outer stick shell is constructed mostly by the male, while the female does most of the lining. The Verdin’s roosting nests help it stay warm in winter. Winter roosting nests have thicker insulation, and may reduce energy requirements for thermoregulation by as much as 50 percent. The Verdin builds roosting nests all year round. One pair of Verdins in Arizona was observed building 11 nests in one year.”

Verdins are hardy and adaptable. You may see them active on the hottest summer days and the coldest winter mornings.

Verdins have a distinctive loud, rapid whistle which you can hear from a Cornell recording here.