In April 2013, radical educator, Angel Roman Verdugo was disciplined by the Pennsylvania Department of Education after it was alleged that he “engaged in inappropriate sexual contact with a male autistic student.” Only this week was Roman Verdugo stripped of his certificates by the Arizona State Board of Education.

In light of the failures of the Arizona State Board of Education (SBE) investigative unit, questions are being raised about the SBE’s handling of similar allegations made against Verdugo when he was a teacher in the Phoenix Elementary School District.

At the time Verdugo was stripped of his Pennsylvania certifications, “he was a lecturer in education at Holy Family University and at Kensington High School, both located in the Philadelphia School District, Philadelphia, PA. He was disciplined by the Pennsylvania Department of Education, Professional Standards and Practices Commission on or about April 25, 2013, resulting in a revocation of his teaching credentials due to allegations of sexual misconduct with a male student,” according to Arizona SBE records.

Roman Verdugo was a teacher at Herrera Elementary School in the Phoenix Elementary School District from 2005 through 2007. “On or about September 11, 2009, the Board received a report of allegations of inappropriate conduct with students on or about June 2006. Two parents notified the District in August 2009. Phoenix Police Department conducted an investigation. No charges were filed. Mr. Verdugo did not accept a contract for the 2007-2008 school year and as a result his termination was presented to the Governing Board as a resignation,” according to SBE documents. 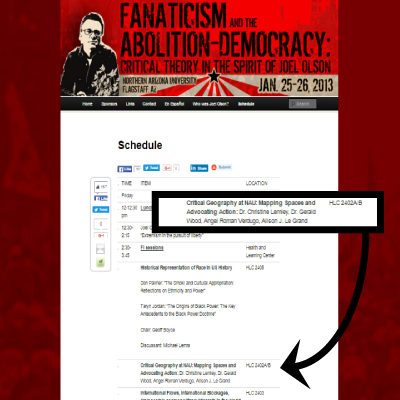 In the intervening time, the radical educator participated in spreading Critical Pedagogy. For example, in January 2013, Ramon Verdugo participated in the Olson Memorial Conference: Decolonization and Abolition in a Global Context, at Northern Arizona University in Flagstaff on the subject Critical Geography at NAU: Mapping Spaces and Advocating Action.

During the SBE investigation, Verdugo was informed that a complaint would be filed against his teaching certification and chose to voluntarily surrender his certificate. On March 11, 2016, the Board Investigative Unit received Verdugo’s notarized affidavit in which he surrendered his certificate.

Verdugo’s case begs the question: would the student in Pennsylvania have become a victim if the State of Arizona had taken steps to strip him of his certificate at the same time he was allowed to resign from Herrera Elementary?

There is no way to know, but what we do know is that the SBE’s investigators have failed over the years. We do know that lawmakers may still be working through the budget process to strip the office of the Superintendent of Public Instruction of its powers and bestow them on the SBE.

The irony is that members of the SBE wanted to vote on the Verdugo matter along with other cases on the consent agenda. No discussion of the State’s failures would have occurred and the matter would have been swept under the rug. It was only because Superintendent Douglas pulled the item from the agenda that the public had a chance to understand how the system works and how it has failed.

In December 2015, Douglas sounded the alarm about the situation with the investigators. The Arizona Department of Education had discovered a chaotic teacher discipline system and a backlog of cases. The Department issued a report that showed that the SBE has failed to protect students from unprofessional teachers.

Rather than repair the broken system, the governor and his minions on the SBE keep up the fight against Douglas. They claim that statute gives it the authority over SBE staff, including investigators. Evidence shows that Douglas is correct in her assertion that the staff, who serves the SBE, do so under direction of the ADE. While they battle, investigators sit in the Executive Tower, and no one knows who is preying on students.

Based on the multiple cases in which teachers were accused of abusive behavior, it is clear to everyone but y Ducey that his plan won’t work and kids can’t wait for him to figure that out.

“The SBE has been performing miserably for years, with no one holding them accountable. Not only did the SBE commit Arizona to Common Core months before the standards were even written, they also botched more than a third of teacher investigations. Between 2010 and 2015, 79 cases of teacher misconduct were not properly reported by investigators under Board supervision to state and national databases. A teacher whose certificate was revoked in Oregon managed to get a teaching certificate in Arizona two months before she was charged with 10 felonies in Oregon, for allegedly having sex with a student. It’s time to hold the SBE responsible for their actions,” stated education advocate Anita Christy, publisher of the popular Gilbertwatch.com.