This week Albert Vetere Lannon’s Pima County Emails Show I-11 $15 Million Dollar Fraud article was the focus of scrutiny by ADOT officials, and on Wednesday the Department issued a press release reassuring Arizona residents that their voices will be heard as the planning process for the freeway proceeds.

Lannon exposed Pima County’s leadership’s plans to circumvent the public in the process.

The Arizona Department of Transportation’s Interstate 11 study team visited Casa Grande, Buckeye, Nogales, Tucson, Marana and Wickenburg to involve the community in a process known as public scoping, part of an environmental study to select a corridor alternative between Nogales and Wickenburg.

Lannon revealed the extent to which “a clique of Pima County staff, mainly based in County Administrator Chuck Huckelberry’s office, working with private business organizations, political appointees, lobbyists, and cronies” attempted to manipulate the planning out of public view.

Emails reveal the clique’s efforts to stack the deck at those meetings with cronies who would speak out in support of what is known as the Avra Valley route.

Despite their machinations, ADOT representatives did hear from the public. In addition to those who attended the June meetings, 125 people submitted comment forms or surveys and 522 people completed an online survey during a 45-day comment period.

“We’re excited about the high level of interest and engagement that we’ve seen,” ADOT Director John Halikowski said. “The great turnout and the opportunity for the public to tell us what’s important to them are critical to this process.”

ADOT spoke loud and clear in Wednesday’s press release that the public can still prevail. “No specific routes for I-11 have been chosen or favored at this early stage in the process. ADOT’s goal is having a selected corridor alternative in place at the end of the environmental study. A no-build alternative will be considered as well.”

It is still incumbent on members of the public who want the project to serve the public’s need to remain involved. The next formal public involvement opportunity will begin early next year, when the study team will present possible routes for I-11.

Anyone interested in sharing their views about the study can do so at any time throughout the study process. Information and materials, including a map of the corridor study area, are available at i11study.com/Arizona

The study team, which also held scoping meetings in Phoenix, Casa Grande and Tucson with representatives of 21 federal, state and local agencies, will now analyze the feedback.

Anyone interested in sharing their views about the study can do so at any time throughout the study process. Information and materials, including a map of the corridor study area, are available at i11study.com/Arizona

According to sources, Huckelberry appeared to be very unhappy on Wednesday. 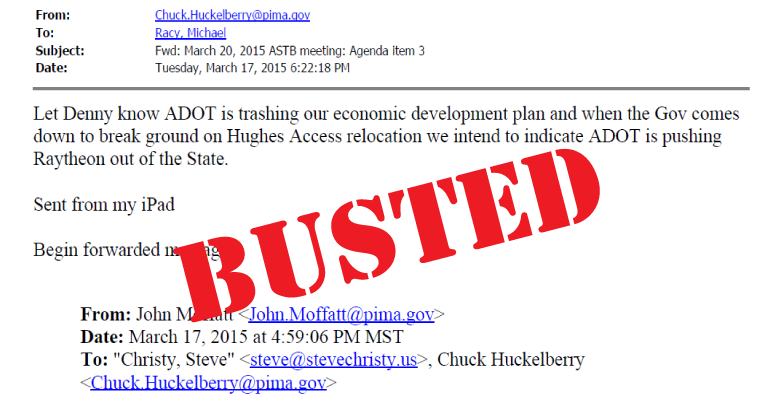