In December, 2014, the Arizona State Transportation Board (STB) approved $15 million for a Tier One Environmental Impact Study (EIS) to develop routes for a new Interstate 11 from Wickenburg to Nogales.  They then suspended a number of just-approved road projects to free up funds for the EIS.  There were a series of public and private meetings through June, 2016, for “scoping” prior to determining a variety of alternate routes and selecting the “preferred alternative.”  That three year study is a waste of taxpayers’ money because the favored Tucson-area route has already been decided by the powers-that-be.

But county emails obtained by the Arizona Daily Independent.com through a public information request show that the I-11 promoters are worried about growing opposition, especially from residents of the Avra Valley who are directly threatened by the new highway.

On March 26, 2014, then-STB Chair, and now candidate for Pima County Supervisor, Steve Christy wrote to county staff and others:

“The greatest risk of conducting (a study being considered) is that it will prematurely and unnecessarily stir up all the anti-highway builders, especially in Avra Valley who will get stirred up enough anyway once the EIS is underway giving them more time and reason to activate and hone their skills….”

In a May 18 meeting with Avra Valley stakeholders, including this writer, ADOT Project Manager Jay Van Echo said that they would come up with a “couple of dozen lines on a map” but acknowledged that there were really only two choices:  following the existing I-10 corridor or the Avra Valley route proposed by Huckelberry.  ADOT rejected the I-10 alignment six years ago in context of an I-10 Bypass that is virtually identical to the Huckelberry Avra Valley proposal.

At that December, 2008, meeting in Tucson, then-ADOT State Engineer Jennifer Toth raised and dismissed double-decking just six miles of I-10, from Ruthrauff to I-19, on the basis of cost.  Using ADOT’s numbers, while the cost-per-mile of double-decking is higher, that alternative would actually cost 1/3 what a new highway would cost, saving taxpayers nearly $2 billion. 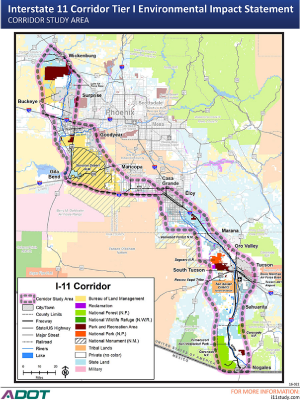 That STB meeting, chaired by attorney Si Schorr, adopted the $3 million I-10 Bypass “Major Investment Study” without hearing from even one of the more than 100 people present, leading to a vocal protest with police called in and the meeting recessed.  Finally five people were allowed to voice their opposition, including Saguaro National Park, Arizona Game and Fish, the US Bureau of Reclamation, and two Avra Valley activists.  The vote went unchanged, but no money was available for the study so it went dormant – until I-11.

Van Echo’s admission, while professing his “neutrality,” confirms a long string of communications getting the already-preferred Avra Valley route in motion.  Curiously, all of the maneuvering has been done by Pima County staff with cronies from the private sector, and not by the county officials elected to make policy. The recipients of email copies go far beyond government.  Leaders of the Tucson-Metro Chamber of Commerce, Imagine Greater Tucson, Southern Arizona Leadership Council and Tucson Regional Economic Opportunities, now called Sun Corridor Inc. – all private business organizations – were copied on many of the county emails.  All are pro-I-11.

The Pima County Board of Supervisors, whose majority strongly supports the County Administrator, has its own problem.  Nine years ago they passed a resolution, 2007-343, that clearly opposes the proposed highway.   That resolution concluded:

“Now, Therefore Be It Resolved that the Pima County Board of Supervisors opposes the construction of any new highways in or around the County that have the stated purpose of bypassing the existing Interstate 10 as it is believed that the environmental, historic, archaeological and urban form impacts could not be adequately mitigated.”

Board members have been silent about the contradiction between their own policy and their support for I-11 and the Sonoran Corridor, although Supervisor Ray Carroll said that they might have to rethink it.

The county emails show years of maneuvering to get the Tucson-area I-11 route prioritized by ADOT, with John Moffatt, who likes to use “Dr.” in his title to show off his PhD, telling Huckelberry, Schorr and others on October 11, 2013:

“We are focused on getting the Avra Valley route on the PAG (Pima Association of Governments) Regionally Significant Routes map due to be published soon so we have a basis from which to advance the request for the next study…We should not have to wait until the Phoenix alternatives are studied in detail as that will be years.”  PAG quickly fell into line.

Si Schorr told Huckelberry that same day that he had “attended the ADOT Board meeting in Wickenburg this morning.  Preceding that, yesterday, I had conversations with Chairman Victor Flores, Vice-Chair Kelly Anderson, and separately with other Board members concerning I-11…Steve Christy will be (STB) Chairman next year, and Kelly Anderson will be the Vice-Chair.  This places us in a good position vis-á-vis the Tucson commitment.”

Since Schorr was no longer on the State Transportation Board, it is unclear just who he was representing in his travels and paying for his lobbying activities.  He is a Director of the private Southern Arizona Leadership Council.  A February 7, 2014, email from Schorr to county planner Moffatt recounted the lawyer’s making contact with a former Arizona Republic reporter to get the Tucson I-11 route publicized and that he had invited Arizona Daily Star reporter Gabriela Rico to attend an I-11 meeting in Sierra Vista.  Rico, and other Star reporters, have ignored opposition to I-11 in their stories.  Schorr urged Moffatt, with copies to Huckelberry and others, to get “heavy hitters” like Jim Click and Don Diamond activated. 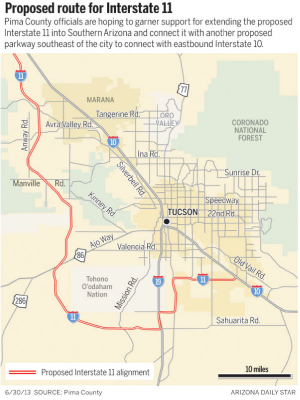 Originally listed as a segment of I-11 on Pima County maps by the Administrator’s office, the Sonoran Corridor is intended to benefit Raytheon, Tucson International Airport, and the University of Arizona Tech Park.  It could do that with a pretty straight east-west line connecting I-10 and I-19 east of I-19.  The chosen route, however, drops south to benefit “heavy hitter” Don Diamond’s planned 3000-acre Swan Southlands development, and then goes west to connect with Huckelberry’s Avra Valley highway.  That route covers over 1500 acres owned by Mesa real estate speculator, and failed political candidate, Wilford Cardon.  Critics call the curious benefits for the two millionaires “crony capitalism” and note that such gifts to private persons or companies are illegal.

That is the reason given why Pima County refuses to grade or maintain most of the dirt roads in Picture Rocks with its 10,000 people, a center of opposition to I-11.  Those roads, the county says, are really “utility easements” and private property which they are prohibited from improving.  County road crews have no problem using those “utility easements” as staging areas for clearing flood debris off of paved county roads.

The November, 2015, Pima County bond election’s number one proposition included $30 million for the Sonoran Corridor, packaged with popular road repairs.  That proposition, and all of the bond measures, went down to a stunning defeat.  That has not stopped Board of Supervisors and Sun Corridor, Inc. Chair Sharon Bronson and county staff from trying to find ways to resurrect it.

While trying to position the Sonoran Corridor prior to the bond election, real estate banker, auto dealer  and former STB chair Steve Christy complained on March 17, 2015, to Huckelberry, Moffatt, Cornelio, and SALC vice-president Ted Maxwell that ADOT might label the highway as a “planning route” instead of a designated State Route.  Christy was upset: “Oh crap!  This stinks…This just isn’t right.”

Huckelberry, obviously piqued, sent the email on to lobbyist Michael Racy the next day, saying, “ADOT on shit list.”

WHO RUNS THE SHOW?

What the record shows is a clique of Pima County staff, mainly based in County Administrator Chuck Huckelberry’s office, working with private business organizations, political appointees, lobbyists, and cronies to shape public policy in Pima County and beyond.  They could be called the “Power Structure” or the “Establishment,” or even “The Secret Government,” since none are elected or accountable to the people.

Many of these people are the same ones putting tens of thousands of dollars into election campaigns, whether for the defeated bond measures or for their candidates for the Board of Supervisors, both Democrat and Republican.  ADI is the only media source publishing the information from candidates’ required filings of contributors.

The Board of Supervisors sets policy and hires staff, including the $320,000 per year County Administrator, who are supposed to carry those policies out.  The record shows that BOS Resolution  2007-343 has been ignored and deliberately circumvented by county staff, and the Board has let it happen.

A personal note:  In discussing this article with a smart and politically savvy friend, that person said the article would be disempowering rather than empowering, adding  “I-11 was a done deal” and there was no real program to defeat it.  The I-11 route through the Avra Valley may be a “done deal” in the minds of The Establishment in that they are not open to considering other alternatives, but that does not make it inevitable.

The bonds were supposed to be a “done deal” that couldn’t be stopped, even with the Yes campaign and their “heavy hitters” outspending the No campaign something like 200 – 1.  The voters saw through the smoke and mirrors and stopped them in their tracks.  I-11 can be stopped too.  The Avra Valley and its communities, wildlife, archaeology – and tourism-related jobs – can be saved.  We can shine the spotlight on the manipulation and maneuvering, and we can vote.

This November most eyes will be on the presidential election, but also up is the Pima County Board of Supervisors.  A number of candidates – incumbent Ally Miller in District 1, Republican challengers Marla Closen and John Backer in District 4, Kim DeMarco in District 3, and Richard Hernandez (ruled off the ballot but a possible write-in) in District 2 — have said they would not retain County Administrator Chuck Huckelberry, the heart of the pro-I-11 campaign.  Green Party candidate Martin Bastidas in District 5 might be persuaded to join them to help stop the environmental destruction I-11 would cause.

The pro-I-11 forces will argue, as they always do in pushing dubious projects that benefit themselves and each other, that I-11 means jobs.  The planning studies clearly show that those jobs will be in Mexico, where wages lower than China’s are predicted by ADOT.  R&D in Arizona and Nevada, manufacture and assembly in Mexico.  That’s called “integrative manufacturing.”  “Nearshoring” is attracting US companies from China…to Mexico, and stealing American jobs from the West Coast to the expanding Mexican Port of Guaymas.   It’s really about profits, not jobs.

Many people are turned off by the negative campaigning in this heated political season.  They may not vote.  We can encourage our friends and neighbors to save democracy by practicing it, at least at the local level.  The people, communities, wildlife, desert and jobs we save…might be our own.

The author wants to thank the Arizona Daily Independent.com  for making copies of the Pima County emails they obtained available.  While ADI and I do not always agree on many things, they are performing a real public service that no one else has stepped up to do.  This is what the “Fourth Estate,” is supposed to do.

Contempt For Farley In Emails Does Not Amuse Pima County Residents