A recent review of Pima County emails shows that the Communications Department has increased its activities in a way that few taxpayers would expect or condone. A Freedom of Information Act request has revealed the extent to which County resources are used to manipulate the media and the public.

In an email dated July 3, 2016, Communications Director Mark Evans transmits a “letter to the editor” he has penned on behalf of Clarence D. Klinefelter to County Administrator Chuck Huckelberry, Supervisor Sharon Bronson, Huckelberry’s Chief Administrative Assistant Maura Kwiatkowski, and Deputy County Administrator Jan Lesher. The subject of the email is: “Why I sued the state of Arizona.” Evans wrote:

Here’s the draft. I made a lot of assumptions at the beginning about the Klinefelters. He should review it for accuracy and make necessary changes. I don’t have a contact email for him.

Klinefelter, whose family owns over $2 million in property in the Ajo area of Pima County’s District 3, was a plaintiff in the lawsuit against the State. In that lawsuit, the Court ruled that the State had violated Article 3, and Article 9, “of the Arizona Constitution by impermissibly delegating the legislative power of taxation to PTOC.”

In Klinefelter’s letter, Evans thanks Bronson and “county leadership.” At the time, despite having prevailed in court, the County and the supervisors who supported the lawsuit; Bronson, Richard Elias, Ray Carroll, and Ramon Valadez, were coming under criticism for the perceived attack on public education funding and the County’s refusal to live within its means by Supervisor Ally Miller, and others including state lawmakers.

Why I sued the state of Arizona

I believe in public education and my family and I have supported Ajo Unified School District in many ways for decades. My son was an Ajo school board member, my kids and grandkids all went to or are going to Ajo public school, my family volunteers at school district functions, and as prominent business owners in this small town, we make many financial contributions to school-related groups and events.

We also pay our school district property taxes every year. That is part of our civic duty as Americans. It’s also out duty to pay our state and county taxes. But last year when the state of Arizona decided that in addition to paying those taxes, I also had to pay a tax to Tucson Unified School District, I said enough is enough. I pay taxes to the county and expect to receive county services in exchange. I pay Ajo school district taxes so the kids of Ajo can get a public education like children who live 130 miles from Ajo.

I have nothing against the good people of Tucson or TUSD, but let them pay their own taxes to educate their children. That is why we have school districts. I’m glad and relieved that Pima County and I prevailed in our lawsuit against the state. I’m greatly appreciative of my supervisor, Sharon Bronson, and county leadership for being willing to help me defend county taxpayers against this unconstitutional action by the state.

Bronson goes on the attack

It is unclear if the letter was ever submitted for publication. What is clear is that it was intended to bolster Bronson and justify the Klinefelter’s participation in the controversial lawsuit. It is also clear that few residents enjoy the type of service offered to the Klinefelters. However, few residents can afford to make the same sort of generous contribution Mrs. Klinefelter made in April to Bronsons’ re-election campaign.

Bronson, who represents District 3, is facing a challenge in the General Election from political newcomer Kim DeMarco.

Because Bronson is at risk from opponents of the lawsuit and the County’s other questionable dealings, she has begun campaigning early. Bronson has use a portion of her campaign money provided by friends like the Klinefelters to attack her critics in the media.

Supervisor Ray Carroll first raised eyebrows when he used County resources to have transcripts made of fellow supervisor and nemesis Ally Miller’s appearances on KQTH’s James T. Harris radio show. But Bronson has not only raised more eyebrows, she raised the stakes when she opted to use some of her campaign contributions this month to create a venomous attack ad against Chris DeSimone and Joe Higgins to play on their station, KVOI.

In that ad, Bronson attacks the two hosts by claiming that they are critical of Pima County employees. To the contrary, while the two have been critical of Bronson, Carroll, Elias, and Valadez, they have defended Pima County deputies in their fight for promised STEP (wage) increases. At the time the ads began, the duo was critical of Bronson for ordering County staff to gas up her car and perform other mundane duties.

Harris became a target of the Communications Department after he first exposed and mocked the cozy relationship between Evans and “journalists” Jim Nintzel of the Tucson Weekly, Dylan Smith of the Tucson Sentinel, and Joe Feguson, Tim Steller, and others at the Arizona Daily Star. The aforementioned, according to a contest created by Harris are in the running to be the next “Huckelberry Hound.” The contest’s premise is based on Huckelberry’s success in securing a larger budget for the Communications Department, and his history of appearing to reward friendly “journalists” with government jobs after they spend years ignoring scandals or creating them about enemies like Miller.

Harris’s commercial for the faux contest reads in part: 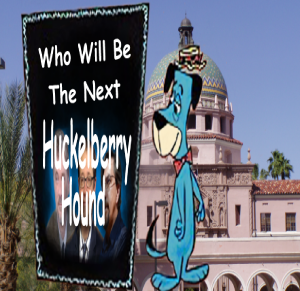 A contest is under way in Pima County – Who will be the next Huckelberry Hound – and the stakes are big — a cush job as a propagandist with the crack communications crew for Chuck Huckelberry.

Yes, that is right, so far contestants have submitted such works as:

The winner will receive superb benefits package that includes a county funded Prius complete with regular car washing services. Lunch at Rigo’s and trips to Chuck’s Mexican hideaway are perks that keep the propaganda crew ginning out gibberish.

Who will be the next Huckelberry Hound? Stay tuned… results will be announced immediately after the Board of Supervisors approve Chuck’s budget which includes expansion of the Communication Department.  Listen here

Evans, who has worked with all of the aforementioned, continues to have cozy relationships with them. That coziness affords them easy access to records and information. It also guarantees coverage of issues that serve Huckelberry and the majority of the Board. Hence, the current dispute between Smith, Ferguson and Miller regarding public documents will continue to be covered ad naseum on a daily basis until the Republican Primary in August. This despite the fact that Miller claims to have given both reporters all of the emails to and from her private email address that deal with County business.

Currently both reporters are relying on Carroll and a former disgruntled employee of Miller, Jeannie Davis, to gin up stories on Miller’s alleged refusal to turn over emails. The reporters are relying on emails she did turn over to prove that there must be more. Unfortunately for Miller and everyone else who operates under the laws of logic, one cannot prove a negative. As a result, the controversy will continue until the reporters prove that something does in fact exist, or Evans moves them onto a new line of attack.

No ethical considerations for propagandists

Before coming to work as the head propagandist for Pima County, Evans oversaw the demise of the Tucson Citizen. During his employ, the Citizen had become a bloggers’ aggregate site. While there, Evans’ ethics were questioned and writers left as a result of his refusal to require accurate reporting by all bloggers.

Evans then took a position with Inside Tucson Business, but only lasted a short time before he left in a public huff over what he claimed was the newspaper’s lack of ethics.

One popular Pima County journalist, who asked not to be identified for fear of repercussions called Evans’ letter to the editor for Klinefelter “grossly unethical,” for someone who served as a lecturer at the University of Arizona’s School of Journalism. However, Evans is no longer listed as an active member of the School’s faculty, and as a result likely has no ethical standards under which he must operate.

There can be no ethical expectation of a public relations person working for the current unethical Pima County administration, and as a result, it does not appear that Evans did nothing other than follow orders.

A review of the County’s emails has revealed a pattern in which Evans and the County Communications’ staff is little more than a taxpayer funded independent expenditure committee for Huckelberry preferred incumbents.

The ADI sought comment from Evans early on Friday, but has not received a response.

Miller has claimed that County resources are being used in a preferential manner. Miller claims that she was advised by staff that because her views do not support the actions by the Board majority and Huckelberry, her own staff would have to prepare her press releases and other official statements. Due to the appearance that Evans caters to Bronson and other favored supervisors by inviting them to media “opportunities,” which would give them positive coverage by the media, another Freedom of Information Act request was filed by the ADI for emails to and from Evans, Bronson, Miller, and Huckelberry.

DeMarco stated, “The lack of transparency and illegal and misuse of their political position should be a serious red flag to the citizens of Pima County. People should be very concerned about what we DON’T know. Politician’s in office too long are dangerous.”

“It is human nature to want to help your friends, but when you are in a position of authority, your most important friends are the ones who elected you and trust you to serve their needs – the citizens,” stated John Backer, who is running for Carroll’s seat. “I find it disappointing and shocking that the Pima County Communications Department is being used to draw up press releases for private citizens while Supervisor Miller is being told her staff must issue her official press releases – perhaps this points to an opportunity to save some taxpayer funds in upcoming budgets. When people, who have been in power too long feel threatened, their desperation shows in their actions. We have seen that here. I know that I am running to change that.”

“I find this information extremely disturbing , however it is not surprising,” stated Miller on Sunday. “The recent smear campaign against me is clearly  coordinated with supervisors, Huckelberry and media outlets.  This level of corruption is exactly the reason support for my campaign has skyrocketed in the last month.  I am thankful the electorate is informed and understands just how critical the upcoming elections are for our community.”