Pima County Supervisor Sharon Bronson has shown a complete lack of regard for Arizona’s laws governing elections and government resources. In fact, on at least three separate occasions, Bronson and her staff used County resources in connection with her re-election campaign.

According to emails obtained through a Request For Information by the Arizona Daily Independent, Bronson and her staff made arrangements for campaign events, or shared information with campaign staff or supporters through the County’s email system.

As the ADI reported in early July, Bronson and her campaign consultant, Shasta McManus, of Strategic Issues Management Group appear to have violated state statute when Shasta “announced in an email dated May 20, 2016 to Bronson’s County email account that she wanted to make a story about Supervisor Ally Miller’s former 19 year old staffer’s fake website go viral.

In that case, Republican Legislative District Chair Sergio Arellano, whose District is partially represented by Bronson, began the process to file a formal complaint with the Attorney General’s office.

Since that time, 2 other emails strings were found that show that Bronson instructed staff to use the County’s email system to respond to two campaign events.

● In an email dated June 1, 2016 time stamped 9:55 a.m., Bronson received an email invite from Jennifer Cox at TEP to participate in the company’s candidate forum for their employees. At 10:15 the email is forwarded by County staff to Bronson, and at 10:57 Bronson instructs staff to “RSVP and put on calendar.”

● In an email dated June 8, 2016, Bronson received an email asking if she would participate in the Arivaca Family and Community Education (AFCE) Candidate Forum on July 9. Bronson’s staff forwarded the invite to Bronson rather than refer the sender to Bronson’s campaign. From June 8 to June 16, emails are exchanged between Bronson’s staff and an event organizer.

Use of county resources or employees to influence elections; prohibition; civil penalty; definitions reads in part:A. A county shall not spend or use its resources, including the use or expenditure of monies, accounts, credit, facilities, vehicles, postage, telecommunications, computer hardware and software, web pages, personnel, equipment, materials, buildings or any other thing of value, for the purpose of influencing the outcomes of elections. Notwithstanding this section, a county may distribute informational pamphlets on a proposed bond election as provided in section 35-454 if those informational pamphlets present factual information in a neutral manner. Nothing in this section precludes a county from reporting on official actions of the county board of supervisors.

H. For the purposes of this section:

In the case of the violation with McManus, Bronson forwarded materials to campaign contributors. Another campaign contributor, Mr. Clarence Klinefelter also benefitted from County resources, when Communications Director Mark Evans was instructed to write a letter to the editor, which included a passage in support of Bronson.

Questions have also been raised about McManus and Pima County with the Yaqui Attorney General’s office regarding a contribution that was made to the Pets Are Worth Saving (PAWS) PAC by the Pascua Yaqui Tribe and paid to McManus’ Strategic Issues Management Group (SIMG) and Dan Eckstrom’s DWE Management Consultants Inc., in 2015. In that case, money was put into the PAC months after the election despite the fact that the PAC treasurer, Rhonda Pina, currently a candidate for the Oro Valley Town Council, showed zero debt. Of the $20,000 paid by the Pascua Yaqui Tribe, paid on April 10, 2015, SIMG was paid $7,305 on April 17, and DWE was paid $7,500 on April15, $4,800 on April 17, and $1,893 on July 20, 2015. The PAWS PAC was formed in support of Proposition 415 which was passed by voters in November 2014.

With McManus’ husband, Heath Butrum, at the helm of the Pima County Democratic Party, SIMG caters to the Democratic Party’s establishment candidates like Sharon Bronson and Arizona State Representative Matt Kopec, who last year was appointed by the Board of Supervisors to replace Victoria Steele. The supervisors chose Kopec over the nominee chosen overwhelmingly by Democratic Precinct Committeepersons; Pamela Powers Hannely.

Powers Hannely was instrumental in leading the democratic grassroots in opposition to the pork for cronies bond. That bond failed by a wide margin.

The bonds’ failure was so devastating, that according to emails, Bronson’s staff tracked the “likes” earned on Facebook by an 18 year old Basis High School student’s senior project which examined the reasons for the bonds’ failure.

While Bronson’s use of resource for her campaign is clearly a violation of statute, demonizing a 19 year old staffer, and tracking a high school student violates common decency. 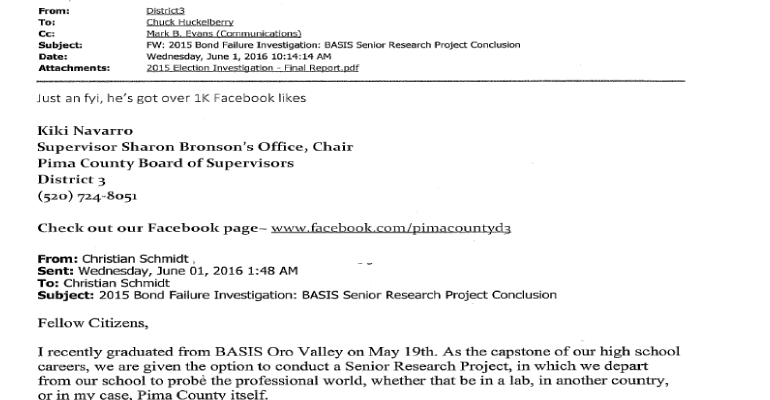