Pima County Supervisor Ally Miller has long complained that there is a conspiracy against her and a review of Supervisor Sharon Bronson’s emails show that she is likely correct. While Joe Ferguson, Dylan Smith and Jim Nintzel hoped to portray Miller has simply paranoid, Bronson’s emails show that it is she who appears to be driving the bus over Miller.

Case in point: on June 8, at 5:55 and 7:19 p.m. and Bronson forwards an email exchange to both Ferguson and Nintzel on June 8. No formal request for the email exchange was filed by Ferguson or Nintzel according to County records. 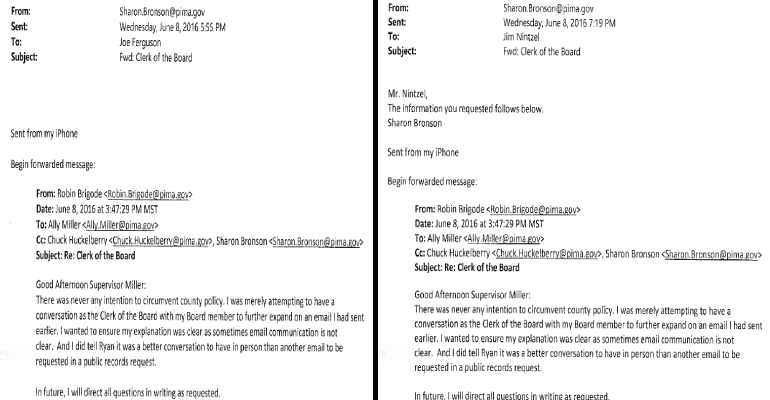 The exchange dated June 8, time stamped 3:11 p.m. between Miller and Clerk of the Board Robin Brigode, reads in part:

Robin,
I received the correspondence below from Ryan Cunningham this afternoon. I am stunned that you would attempt to circumvent the current policy regarding public records requests by refusing to put your own request in written format because, as you stated to Ryan “it could be tracked.” You clearly stated this to my staff member. If you have any questions for me, please submit in writing to my county email.
Regards,
Ally 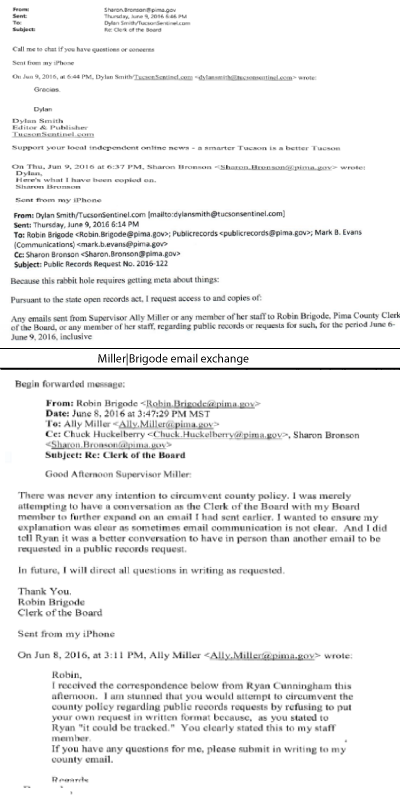 Since taking office, County operatives have been trying to lure Miller staff into inadvertently violating various policies and laws. As a result, when Brigode suggested that Miller call her, Miller made a record of it through the email admonishment. Brigode responded to Miller that she was not trying to circumvent proper protocol, and the matter was dropped by Miller and Brigode.

No reference to the exchange is found in work authored by Ferguson or Nintzel around the time Bronson sent them. Obviously, they didn’t bite. Instead Nintzel, whose hatred for Miller is a thing of legend, wrote a screed on June 10 about Miller’s former 19 year old staff member Timothy DesJarlais who had created a fake news website. In that screed he made no mention of the Brigode/Miller exchange.

Someone did bite. Seemingly out of nowhere intrepid reporter Dylan Smith filed a Request For Information dated June 9, 2016 regarding the Brigode/Miller email exchange. That request was not sent to Miller until June 10. Smith “clarifies his request on June 10, and June 13. Finally on June 14, Smith files an article in which he refers to an email from over two years ago between Miller and a former staff member as evidence that she conducts County business on her personal email account. He also refers to disgruntled former employee Jeannie Davis as a source for more current evidence. Davis regularly used her private email account to supply the ADI and others with information despite Miller’s instructions to the contrary.

In the article, while Smith refers to an email Miller did in fact turnover to him and others that an employee had sent to her private email address, he makes absolutely no reference to Miller’s admonishment of Brigode that business should be conducted in the open. Smith conveniently leaves out the exculpatory Brigode email that was clearly in his possession at the time.

Bronson’s emails reveal to what extent Bronson and Pima County administrator Chuck Huckelberry will go to preserve Bronson’s standing while trying to destroy Miller. That effort includes going so far as to have Communications Director Mark Evans ghost write a letter to the editor for one of Bronson’s constituents and campaign contributor. And while Bronson’s emails show a complete disregard for laws and policies governing the use of County resources for re-election bid, Smith and others have focused on Miller in what most certainly appears to be a coordinated and politically motivated attack.

Miller told the ADI, “This just confirms what I have long suspected as a coordinated effort by the other Board members and the media. This smear campaign has been going on since May and is clearly designed to influence the outcome of an election.”

Contempt For Farley In Emails Does Not Amuse Pima County Residents