Some European countries, particularly Germany and Denmark, have invested heavily in electricity generation from solar and wind sources with the result that the cost of electricity has increased substantially. This post is a cautionary tale because those European countries are paying a heavy price for political correctness. Let’s not follow that path to higher electricity rates.

In 2006, the Arizona Corporation Commission (ACC) imposed the Renewable Energy Standard and Tariff (REST) on non-government-owned electric utilities. REST requires that electric utilities generate an ever increasing amount of electricity from renewable sources such as wind and solar. The original mandated goal was to reach a total of 15 percent renewable generation by the year 2025.

In my opinion REST is a bad idea. I specify reasons in an ADI article “Five Reasons Arizona Should Repeal Its Renewable Energy Standards Mandate.” The reasons include the fact that solar and wind generation cannot respond to supply and demand and thus require backup generation, and that solar and wind generation are not as green as advertised. Furthermore, I can find no place in the Arizona State Constitution nor the Arizona Revised Statutes that give the ACC authority to dictate the methods by which utilities must generate electricity.

Part of the impetus for Tobin’s proposal is the dread global warming hobgoblin – we must “decarbonize.” I show, however, that carbon dioxide emissions from burning fossil fuels have no effect on “greenhouse” warming. (See ADI article: “Evidence that CO2 emissions do not intensify the greenhouse effect”)

Here is what is happening in Europe. The more installed solar and wind capacity per capita a country has, the higher the price people pay for electricity. In the graph below the vertical scale is Euro cents per kilowatt-hour, the horizontal scale is the installed capacity of renewables (solar and wind) per capita. (For reference, the U.S. average residential cost is 12 cents/kwh which is about 9.6 euro cents/kwh, lower than all European countries on the graph.) 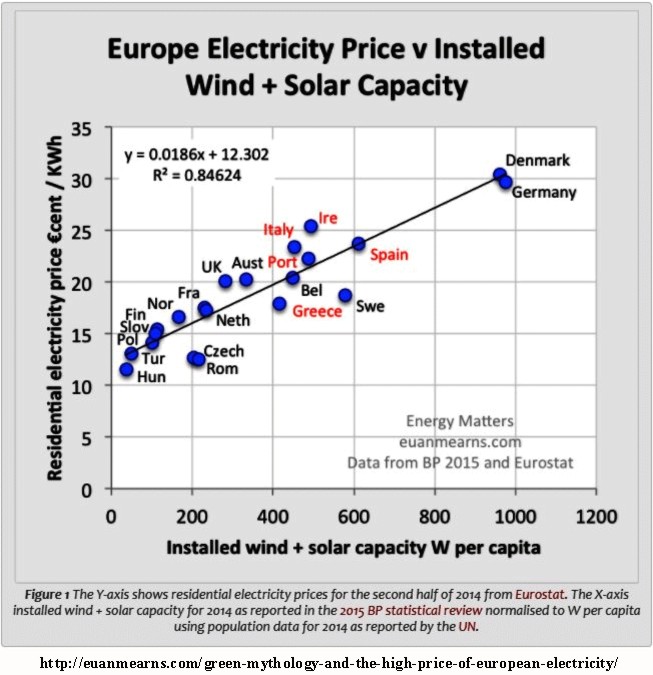 “Despite the rapidly growing green energy capacity being installed, the effort to reduce CO2 has failed, and what’s left is an unpredictable power grid that often produces energy when it is not needed (waste energy) and thus costing Germans hundreds of millions annually. The Green Party claims that wind energy is “the most inexpensive” on the market, but if that is really true, then why do they need subsidies? Why are we paying 25 billion euros annually for their feed-in? An array of expert panels have determined that wind energy is not leading to more climate protection, but rather is only making electricity outrageously expensive.”

A report from Australia:

“In many circles there is a comforting belief that renewables such as solar and wind can replace fossil fuel electrical generation and leave us free to live as we do without carbon dioxide emissions. Fundamental physics and engineering considerations show that this is not so.”

“Power needs fluctuate with time of the day and, to a lesser extent, day of the week. In most places, peaks occur in the evening when people come home, start cooking, and turn on lights and entertainment systems. In Arizona in summer, the peaks are even more extreme due to the air conditioners all cutting in. There are also morning peaks, as people get up and turn on lights and hair dryers. Commercial and industrial use generally doesn’t change much throughout the day. The electrical utilities call this a baseload.”

“Solar and wind present two problems. One is low power density; massive areas have to be devoted to power generation. The other, more serious problem is intermittency. If we only wanted to run electrical appliances when the wind is blowing or the sun is shining, fine, but don’t expect to use solar to turn on your light at night! So solar and wind cannot manage on their own; it’s always solar or wind AND something else.” Read more

Generating more electricity from solar and wind is just a very expensive exercise in political correctness that will have little impact on carbon dioxide emissions, but a big impact on your wallet and an adverse impact on electric grid stability. And wind turbines and concentrating solar installations chop up or burn birds, bats, and bugs.

A Simple Question for Climate Alarmists

“What physical evidence supports the contention that carbon dioxide emissions from burning fossil fuels are the principal cause of global warming since 1970?”