“My school which was once a safe and nurturing place has become a political minefield. Teachers are wearing RedforEd shirts in front of students, being aggressive with all employees about their beliefs but not listening to those who may agree. Teachers are holding RedforEd meetings before professional developments, making it uncomfortable to all involved. The school and grounds are adorned with red ribbons tied around every fence, tree, and building. The liaison for my school stated that we will not be like the Oklahoma teachers and back down. It has divided the staff and I’m fearing that the damage will take long to heal.” – Email dated April 24 to Rep. Kelly Townsend

Leading up to and during the teachers’ strike in April, Arizona legislators were flooded with emails in support and against the underlying political campaign known as #RedforEd. That campaign has swept across the country as part of an effort to elect democrats to office in November.

Initially, the #Redfored movement was portrayed as a nonpartisan effort to increase pay for educators. Many teachers jumped on board the bandwagon and welcomed the call for a walkout by the Arizona Education Association (AEA) and the newly formed Arizona Educators United (AEU).

While much of the media attention was solely focused on the leaders of the movement, AEA’s Joe Thomas and AEU’s Noah Karvelis and Derek Harris, those who stood in opposition were largely ignored.

Not only were those opposed ignored, according to emails recently obtained by the Arizona Daily Independent, they were forced into silence due to the tactics of their fellow educators in some instances. 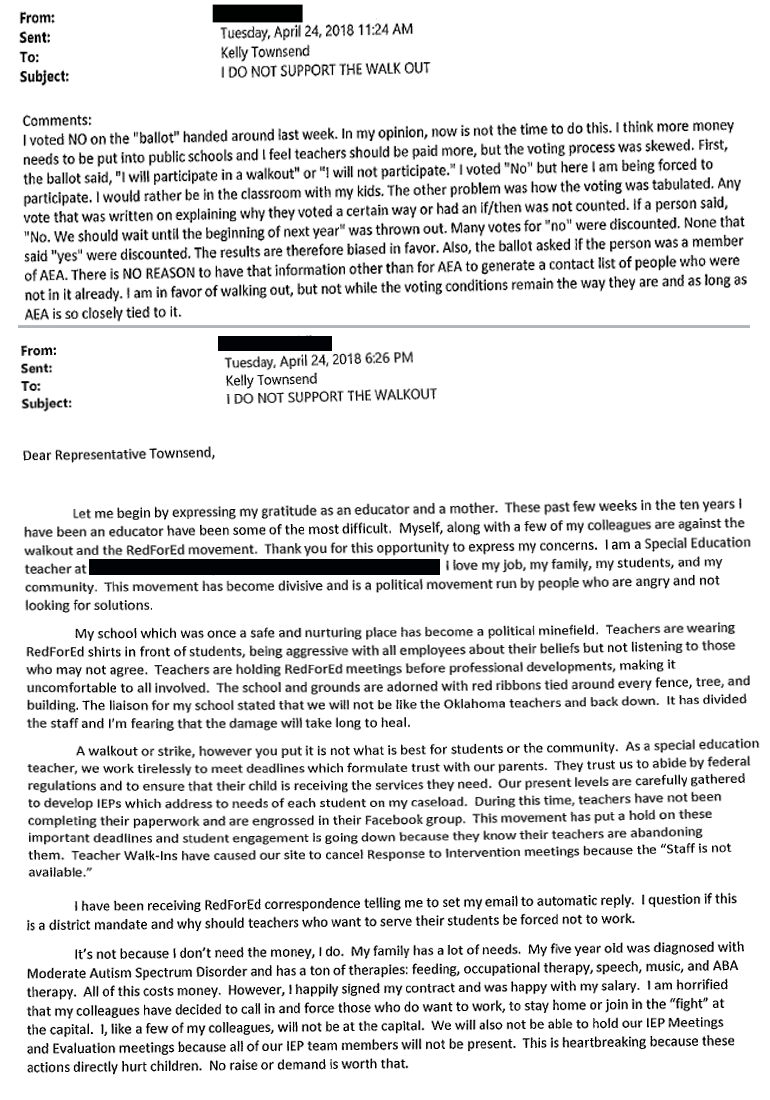 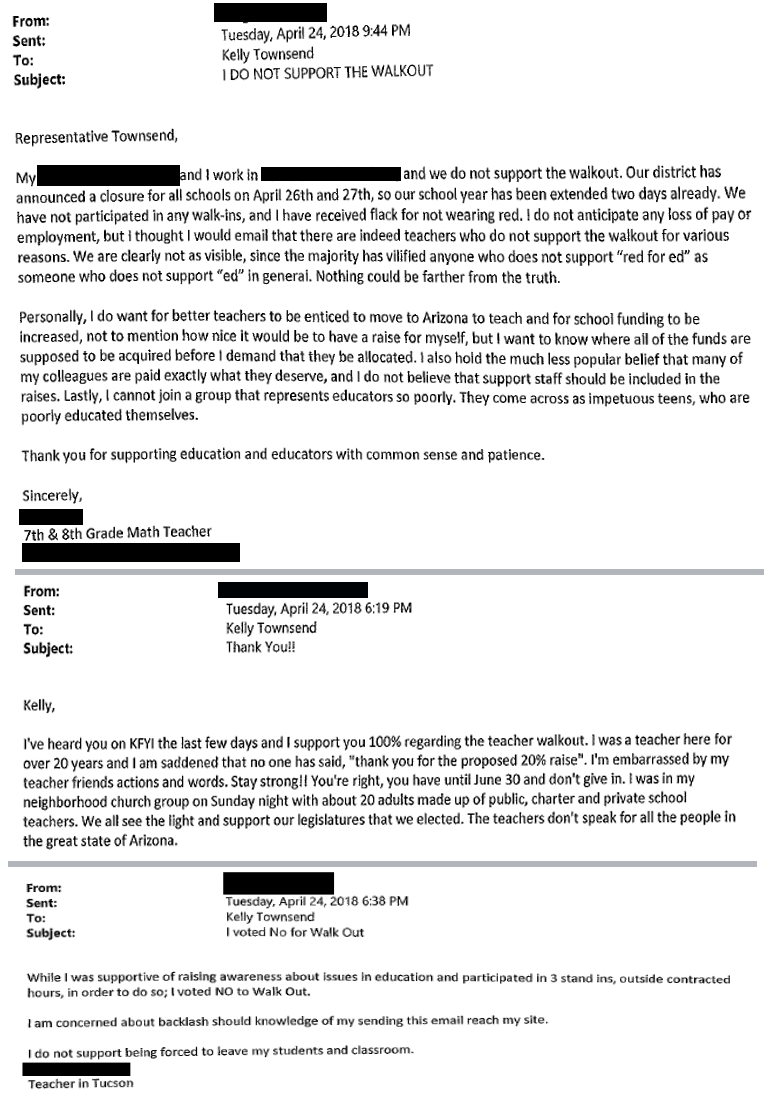 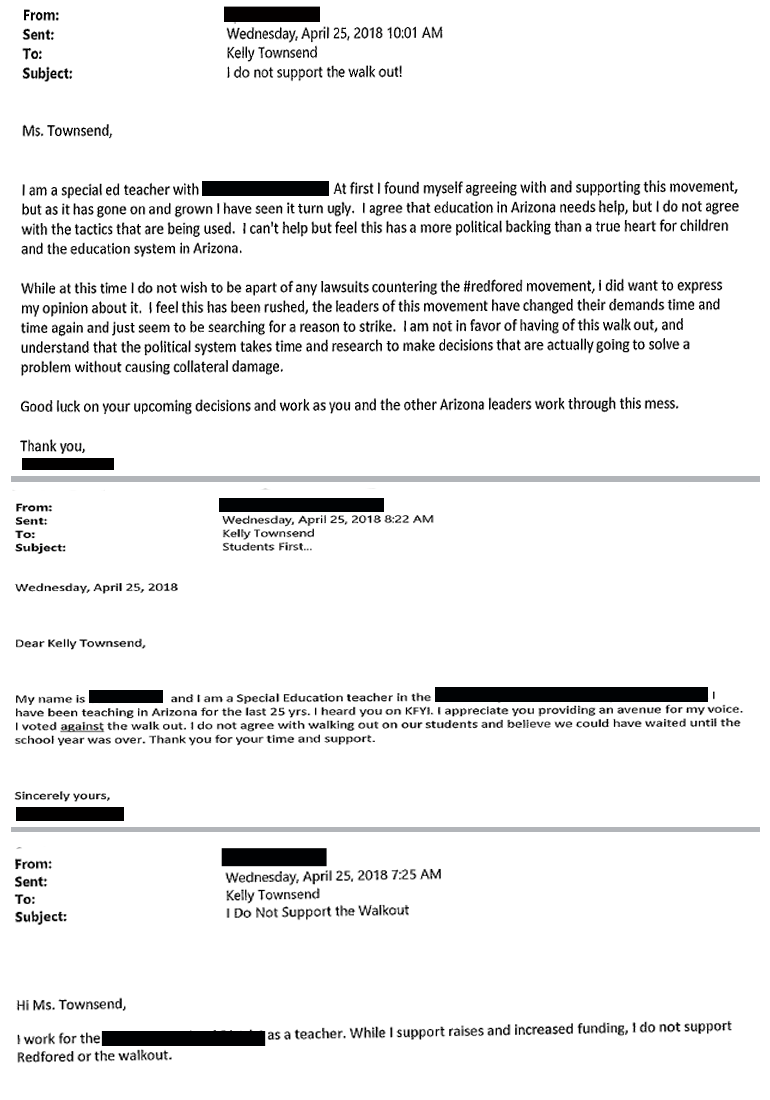 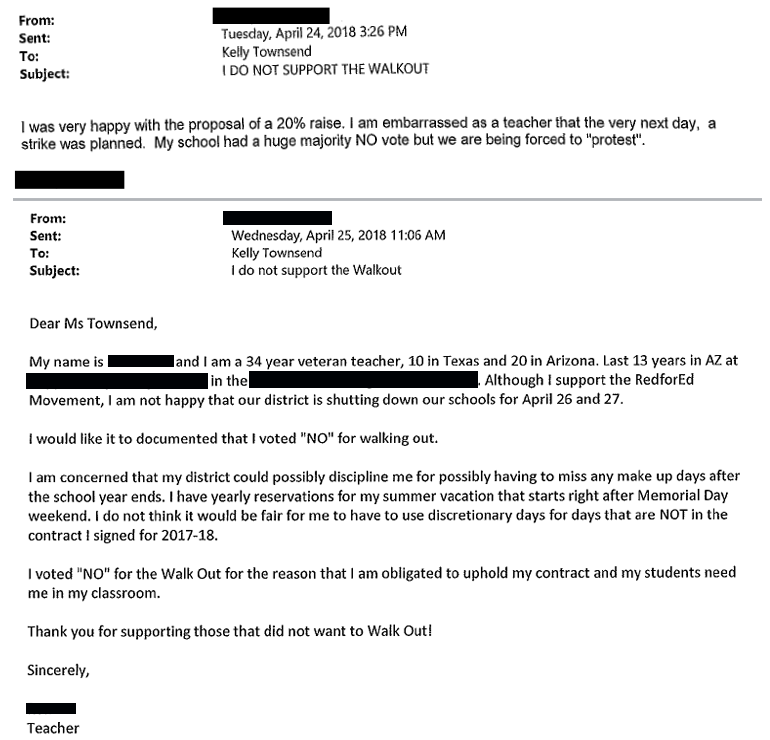 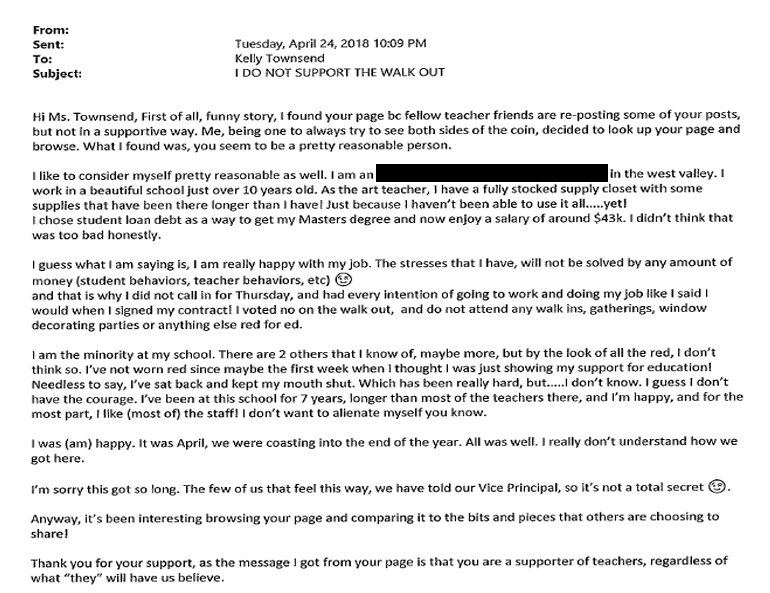 “Every day we were confronted by scared teachers and confused families. Their struggles were not apparent to the public, but they were the driving force for me. It was their pain that prompted me to grow impatient with the political maneuvers of the unions and their foot soldiers’ hateful rhetoric,” said Townsend. “The RedforEd operators called on us to listen, but they were clearly not willing to listen to all teachers.”

On Wednesday, May 9, as Hill spoke the audience gasped and intermittently clapped as she exposed the treatment she has endured at the hands of fellow teachers and political operatives.

Hill is one of the forces behind the growing #Purpleforparents movement. The tenor toward teachers has changed negatively all across the state and the #RedforEd, has caused many families to make plans to abandon tradition public schools in favor of charter schools, private schools, and even homeschooling.

“Arizona has a wonderful voucher program, tax credits for schools, tuition assistance by tax payers; is open-enrollment, open school choice, non-union, right-to-work, and free enterprise for businesses,” Hill told the Arizona Daily Independent. “On a positive note, the #RedforEd “movement” in Arizona has caused citizens to open their eyes, walk through their children’s schools, attend board meetings, and question the very bureaucracy embedded in our education system.”

Chandler Substitute Teacher Relieved Of Duty For Her “Own Protection”

Arizona Teacher Retaliated Against For Opposition To Strike