It is widely known that Pima County Administrator Chuck Huckelberry uses public resources, including staff, to track Supervisor Ally Miller’s interactions. From monitoring every radio interview to trolling her private Facebook page, Huckelberry’s crew might have finally crossed the line.

According to emails obtained by the Arizona Daily Independent, County authorities called for an investigation of Miller’s Facebook friend, Jeff Huntsinger, a disabled Special Operations Army veteran for a comment he made in support of Miller.

The bizarre investigation was conducted by Pima County Sheriff’s deputy, Sergeant Eric Thompson, who serves as the Sergeant at Arms for the Board of Supervisors. Thompson, according to sources, Thompson was expected to conduct the investigation in a way that kept it from the public’s eyes. He failed in that task and compromised Huntsinger’s privacy when he sent the results of his investigation to Chuck Huckelberry’s staff as well as all board members, making it a public record.

I researched the Facebook account of Jeff Huntsinger, the subject who inferred a threat against Mr. Huckleberry on Supervisor Miller’s Facebook discussion about Golden Pin Lanes. He is a real person and has two Facebook accounts under his name. He posts very little, but is a staunch republican with strong views against the democratic party and politically liberal ideologies. His posts are terse and singularly opinionated. He is a former Army member, now retired. A criminal history check found minimal involvements, as a reporting person not a suspect, with no listed history of threats or violence. Though his remarks are irresponsible and inflammatory, there is no historical indication that he will act on them.

However, because of the high emotion attached to this and other topics on next week’s board agenda, combined with Mr. Huntsinger’s posts, I will bring in another officer (plain clothed) should I need additional assistance.

Please let me know if you need any further information.

Contrary to Thompson’s finding, Huntsinger is not a “staunch republican.” According to Huntsinger, he has been a registered Independent for nearly 30 years. Huntsinger, a former railroad man and union member, told the Arizona Daily Independent, that he does not hold “strong views against the democratic party and politically liberal ideologies.” “What I really dislike, Hunsinger said in a Facebok message to the ADI, “is corruption in Tucson politics, and the County and City are rife with it.”

A check of Huntsinger’s phone records show no attempt was made by Thompson or anyone else in Pima County government to discuss the matter with him.

Both Huntsinger and Miller have reviewed Facebook comments, and have been unable to identify any that could have legitimately been construed as a threat by anyone but the most paranoid person.

For his part, Huntsinger knows the County Administrator’s crew “will try to bully anybody that will allow them to bully them. I’m not that guy.” Hustinger says that he can call on his friends from Special Operations, as well as members of the Night stalkers Association to vouch for him. “I was in the B Company 3rd of the 160th Night Stalkers based out of Savannah Georgia Hunter Army Airfield. I was a crew chief on the CH-47 – the “black helicopters,” said Huntsinger with pride.

In an email to Thompson, JoAnn di Filippo, Miller’s chief of staff, made it clear that her office is outraged over the investigation and the violation of Huntsinger’s First Amendment rights:

Supervisor Miller forwarded your email dated 5/9/18 re Jeff Huntsinger to me. I will maintain a copy of your email in our files; however, could you please forward a copy of the specific “Huntsinger post” to which you are referring to in your email? 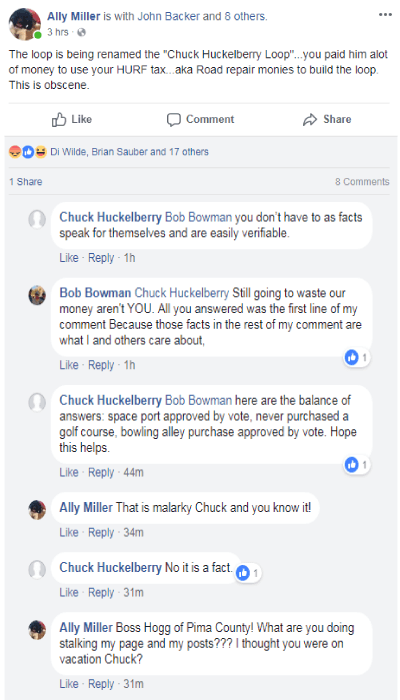 Also, inasmuch as you have now placed your “research” in the public square regarding Mr. Huntsinger (see below), have you notified Mr. Huntsinger of your actions pertaining to your “security review” on Supervisor Miller’s personal facebook page? Please remember that all messages including your email and assessment of Mr. Huntsinger as a “staunch republican with strong views against the democratic party and politically liberal ideologies” are considered a public record subject to disclosure (see, A.R.S. 39-121, cited below).

The reason for this inquiry is that I want to make sure we follow proper protocol for forwarding potential security issues to your attention. Thus, could you please forward me a copy of your department’s protocol for conducting research on issues of high emotion and other topics related to board agendas, and which may support your request for additional law enforcement presence at upcoming board meetings (plain clothed or otherwise)? I would like to inform staff accordingly so we can forward said communications, etc. to you for consideration of your security review. Utilizing this approach will advocate for fair and equal treatment of all comments made in, again, the public square.

If you have any questions, please do not hesitate to contact me.

All messages created in this system should be considered a public record subject to disclosure under the Arizona Public Records Law (A.R.S. 39-121) with no expectation of privacy related to the use of this technology. This message has been prepared and sent on resources owned by Pima County, AZ. It is subject to the computer and electronic policies of Pima County, and the Pima County Board of Supervisors, where applicable.

“On Tuesday night, Mr. Huckelberry showed up on my Facebook page. He is getting very aggressive and his stalking-like behavior is disconcerting. I find it really disturbing that my constituents cannot communicate with me on my personal Facebook page without being stalked and investigated by Chuck Huckelberry,” Miller told the ADI.