Water vapor is a powerful greenhouse gas, but its net effect in the atmosphere is to lower temperatures party because of convective heat transfer. Proponents of anthropogenic global warming (AGW) and most IPCC climate models assume the opposite (and that’s why climate model predictions diverge from reality).

AGW hypothesis: Carbon dioxide, a weak greenhouse gas, begins warming the planet. This warming evaporates water and so puts water vapor into the atmosphere which amplifies the warming effect. This is called a positive feedback.

The graphic below compares four pairs of cities, each at about the same latitude so that each pair receives about the same amount of sunlight, and the cities are inland, away from possible tempering by sea breezes. The data is from the National Weather Service (the temperatures have been corrected for elevation differences). The difference between the pairs is that one city is in an arid climate, the other is in a humid climate. We see that the more humid city in each pair has a lower average annual temperature. The addition of water vapor to the atmosphere has a cooling effect in spite of water vapor being a greenhouse gas much more powerful than carbon dioxide. 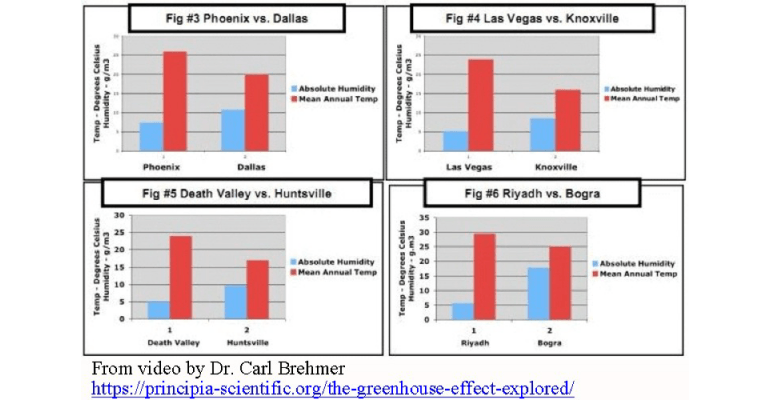 Another piece of observational evidence (from Sweger) shows humidity versus temperature measured daily at 3p.m., the hottest part of the day. Again we see a negative correlation of temperature with humidity, i.e., higher temperatures occur when humidity is lowest. 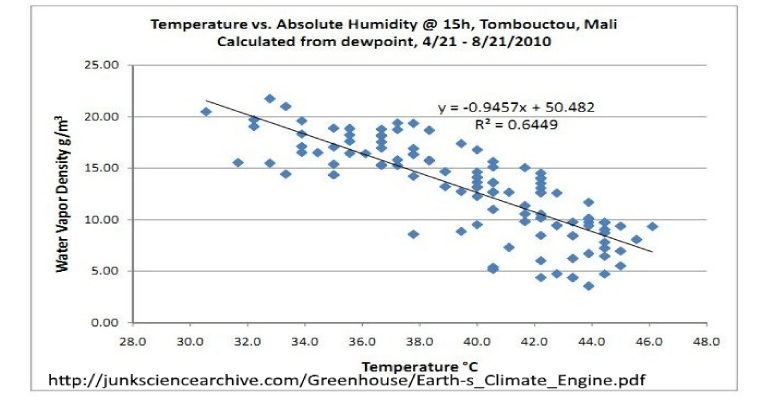 Sweger concludes: “The role of water vapor in determining surface temperatures is ultimately a dominant one. During daylight hours it moderates the sun’s energy, at night it acts like a blanket to slow the loss of heat, and carries energy from the warm parts of the earth to the cold. Compared to that, if carbon dioxide has an effect, it must be negligible. It is also clear from the data presented above that water vapor acts with a negative feedback. The data clearly shows that the relationship between the amount of water vapor in the air and temperature is negative; that is, the higher the amount of water vapor in the atmosphere the lower the surface temperature. In that regard, it almost acts as a thermostat.”

I will mention one more example: Al Gore’s favorite graph. This is the sawtooth graph showing the rise and fall of temperatures and carbon dioxide during the last few glacial-interglacial cycles. I ask, if rising carbon dioxide is further amplified by water vapor, why would the carbon dioxide and temperature rise terminate? Could it be that other natural forces are much stronger than the effect of carbon dioxide? (The temperature changes precede changes in carbon dioxide.)

Conventional greenhouse theory holds that the sun’s energy passes through a relatively transparent atmosphere (in absence of clouds and aerosols) and heats the surface of the earth. The surface radiates energy in infrared wave lengths back into the atmosphere. Some of that energy is absorbed by greenhouse gases, including carbon dioxide and water vapor, and some is re-radiated back toward the surface, thereby raising temperatures. Why then, does the presence of water vapor, a strong greenhouse gas, cause cooling? The answer lies in the properties of water.

Second, is the great heat capacity of water and water vapor, i.e., the ability to store heat energy. Since hot air rises, the contained water vapor transports heat away from the surface by convection.

The third property is related to the second. Water vapor is relatively transparent to incoming solar radiation in the visible part of the spectrum, but is an excellent absorber of infrared radiation. This capacity warms the water vapor and heat is transported away by convection. Sweger notes, “that the IR absorption of carbon dioxide on solar irradiance is of marginal effect since the absorption by water vapor is virtually 100% without any contribution from carbon dioxide.” That may be overstating it a bit, but not by much since there is usually at least 60 times more water vapor in the atmosphere compared to carbon dioxide.

And, of course, more water vapor in the atmosphere produces clouds which reflect incoming sunlight back into space, so it never reaches the surface to contribute to the greenhouse effect.

We see from direct observation that water vapor tends to moderate global temperatures. As Dr. Roy Spencer notes, “The question of how much warming will result from adding carbon dioxide to the atmosphere is what we skeptics are skeptical of. The climate system is amazingly complex, and the IPCC position that elements within the climate system (especially clouds) will change in ways which amplify the resulting small warming tendency is highly questionable, to say the least. If the climate system instead acts to reduce the warming, then anthropogenic global warming (AGW) becomes for all practical purposes a non-issue.”

The greenhouse effect…explored, by Carl Brehmer [link](figures taken from video)

Note: I first published these observations in the now-defunct Tucson Citizen in 2012. So far, I have seen nothing to refute this hypothesis.

A Simple Question for Climate Alarmists – where is the evidence? 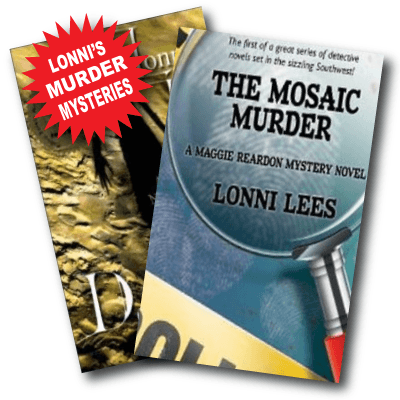 A shorter ADI version is at: https://arizonadailyindependent.com/2013/08/01/climate-change-in-perspective/