In the rush to repeal A.R.S. 15-716, known as the “No Promo Homo” law, Arizona educators, politicians, parents and members of the thinking public missed an opportunity to engage in an important conversation.

Make no mistake, in my opinion the repeal of A.R.S. 15-716 was the correct thing to do. I am not the only one who holds that view. In fact, over the years – almost every year since its passage in 1991 – lawmakers on both sides of the political aisle have tried to do just that.

From then-Senator John Huppenthal in 1997, to Sen. Martin Quezada in numerous years, politicians have taken steps to repeal the law. According to former Arizona State Representative—turned lobbyist, Theresa Ulmer, in an email to Quezada, lawmakers offered at least 17 bills from 1997 to 2019 to repeal the law. In 2016, Paul Boyer and Sylvia Allen proposed HB2189, a disastrous omnibus bill that included a repeal. That bill, which appeared to be written for the benefit of Boyer’s overlords, mercifully did not make it past the First Read in the House.

Upon passage of Senate Bill 1346 this year, Cathi Herod, an attorney who heads up the conservative Center For Arizona Policy issued a statement in support of the repeal:

“I maintain the position that no one should be bullied for any reason, and each case of schoolyard bullying should be handled individually. We’ve seen no evidence to support the claim that current law is linked to any such bullying. However, the unfortunate, continued misrepresentation of the law perpetuates a skewed view of its intent.

“Although Center for Arizona Policy did not exist during the law’s passage in 1991, the intent of the law has never been to show animus toward any group of people. Upon review of the lawsuit, which reads more like a political statement than a legal pleading, I support and agree with efforts by Arizona lawmakers to repeal the current law’s contested provisions. The law applies only to AIDS education. We should all be able to agree that AIDS instruction should be medically accurate and age appropriate.”

“Schools should be a safe, inclusive environment where every student has the opportunity to learn free from harassment and bullying. In Arizona we can’t say that’s the case. For the past 28 years, this law has amounted to an official state-sanctioned climate of discrimination. I am so proud of my colleagues who voted yes today to put this chapter in the rear-view mirror and move our state forward.”

It would be nearly impossible to disagree with either statement. No one should endure bullying and schools should provide safe and inclusive environments. Every kid should value and celebrate who they are. State sanctioned discrimination should be ripped out root and branch from every taxpayer-funded institution without a doubt.

Unfortunately, too many of our kids are not in safe schools free from bullying and much like kids, who fall victim to discrimination due to gender identity issues, conservative kids are also bullied by educators who cannot put aside their own political agendas and overcome their deep character flaws.

All great teachers know that there are no stupid questions. All good lawmakers know that the more they include stakeholders in the development of law, the better chance for success of its passage.

Bad law often comes from a rush to get it through the Legislative Session or a failure to respect and engage a diverse group of interested parties to hammer out the kinks before it is ever introduced. The same can be said of the policies that result from law.

The repeal of A.R.S. 15-716 was quick. From the moment the Equality Arizona v. Hoffman lawsuit challenging A.R.S. 15-716 was filed to the passage of Rep. T.J. Shope’s repeal, the only discussion that could be heard was one filled with accusations from hacks and flacks on both sides.

There was no time for a thoughtful conversation because for God’s sake – don’t you know – no thinking person could think anything but ‘Bad bill must DIE.’

We couldn’t discuss the sexualization of the classrooms, we couldn’t discuss the increasing exposure to pornography that according to studies is doing tremendous harm mostly to our young men and their view and treatment of young women. Nope, nada, zilch. Bad bill must die was all that mattered and another opportunity to engage in hard thinking and constructive dialogue was lost.

After the repeal passed, former Superintendent of Public Instruction Diane Douglas suggested an alternative to the repeal. It was simple and seems pretty inoffensive to me:

No district shall include in its course of study, instruction which PROMOTES, CONDONES OR ENCOURAGES STUDENTS TO ENGAGE IN ANY SEXUAL ACTIVITY OR PURSUE ANY SPECIFIC SEXUAL LIFESTYLE.

Yet, for some of our politicians, from repeal to policy changes, any calls for discussion or questions raised signaled bigotry or other ill-intent. Take for example an email exchange between Roxanna Pitones, Policy Advisor at Arizona State Senate and others regarding the changes to State Board of Education rule R7-2-303 in light of the repeal of A.R.S. 15-716: 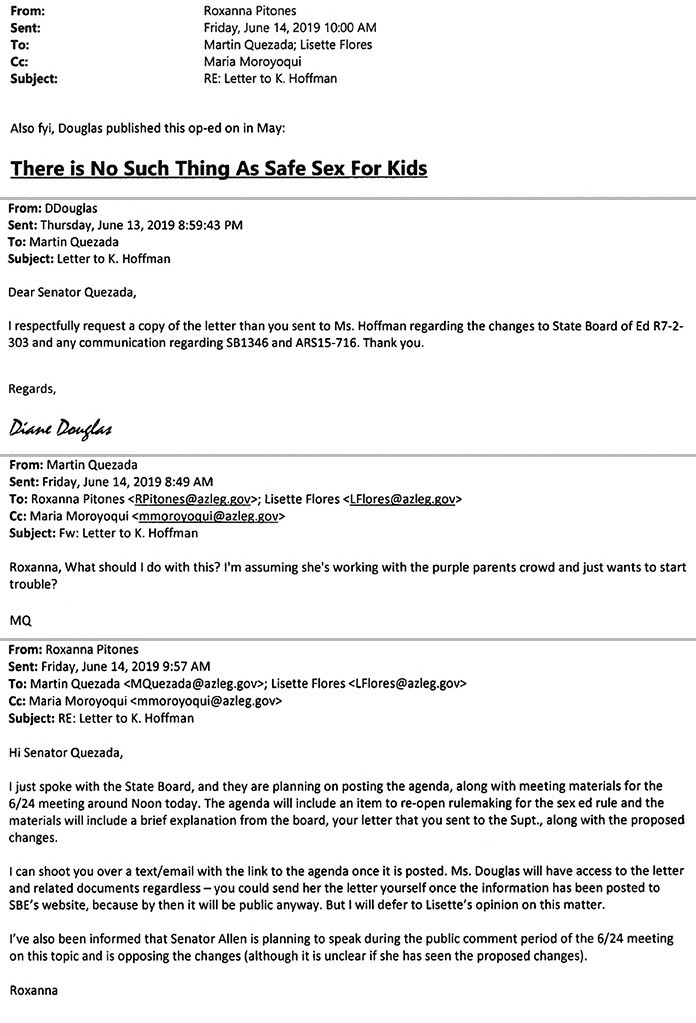 The nerve of Douglas and those pesky parents! They have questions? How dare they? Of course, they can only be looking to cause “trouble.” That what those people do, don’t ya know!

The funny thing is – they did end up causing trouble for Quezada. Despite his and Hoffman’s best efforts, on June 24, Douglas and HORDES of those parent-types showed up to the State Board of Education meeting and successfully blocked the adoption of changes proposed by GLSEN, a LGBTQ advocacy organization.

(GLSEN’s proposed changes might be great; I don’t know because unlike almost everyone else engaged in the debate, I refuse to form an opinion based on too little information digested too quickly.)

Don’t try to sell me, try to reason with me

Across the state of Arizona, school boards are considering changes to their Sex Education curriculum. Due to the repeal of A.R.S. 15-716, the concerns of conservatives have been heightened.

As they were with the repeal of A.R.S. 15-716, stakeholders have been largely denied a seat at the drafting table. As a result, much of the fear is based on what isn’t known as much as what is known about the changes.

Rather than expand the curriculum changing process and making it more inclusive, and thereby potentially eliminating fears, some districts would rather adopt what groups like GLSEN and Planned Parenthood crafted and sell it to the public later in sham hearings.

An email exchange between Tucson education activist Cindy Coleman, a registered Republican, and Superintendent Hoffman, shows the sort of mentality upon which the process plays out:

My experience has been that the conservatives’ minds are open. It is the “educators” and politicians whose minds are closed to the possibility that someone might hold an opposing view that is reasonable and not the product of raw hate and ignorance.

Everybody out of the pool

Okay kids, its time for everyone to get out of the pool. After you calm down, have a light snack, and some fresh water, let’s all sit down together and talk it out. I’m sure we can do it. All we have to do is assume that everyone has the best of intentions and deserves to be heard.