GRAPEVINE, Texas – In early October, I had the opportunity to participate in a mock College Football Playoff selection for members of the media, meant to give us a better understanding of how the selection committee works.

The selection committee’s process may seem a mysterious one. After all, members of the committee can not comment to anyone about any of the actual debates or votes that take place behind closed doors. That said, I came to find that the actual manner in which the selections are made is not only quite transparent – the selection protocols are available online – it is incredibly thorough as well.

The idea for the real committee is to identify and rank the top 25 teams in college football, pick the teams that will participate in the four-team playoff and other selected bowl games and assign the chosen teams to bowl sites.

It is a formidable task.

During the process, each member of the mock committee I was a part of represented an actual member of the committee. I represented Arizona State University professor Paola Boivin, formerly a long-time sports columnist at The Arizona Republic. Though we had only a few hours to do what the actual committee accomplishes over two days, we replicated most of the exact process.

For the sake of this exercise, we used the 2019 season, probably best remembered for the Heisman Trophy-winning season of quarterback Joe Burrow, who led Louisiana State to an undefeated season and the national championship.

This is what I learned:

First, it is important to note that the voting is entirely anonymous.

The actual voting process starts with each member of the committee submitting a list of what they believe to be the top-30 teams in the nation that year. Any team that is entered by three or more of the 13 members is entered into the voting pool.

From there, the process moves on to what is known as the “listing step.” Here, each member will select what they believe are the six best teams from the established voting pool. The six teams with the most votes are moved on to the “ranking step.”

In this step, members will rank the six teams in order. Then, the top three teams will be placed into the committee’s top-25 while the other three teams are held over for the next “ranking step.”

From there, the listing step is repeated. The three teams with the least votes from the previous round plus the top three from the next round make up the next six that members rank in order. The top three in that ranking go into the top 25, and the process is repeated.

First and foremost, when the top-25 is initially completed, the committee is not locked into those decisions. The protocol allows members to contest specific parts of the ranking, and as long as three or more members agree, the rankings can be revisited.

We saw this first hand with our ranking. Initially in our 11-14 spots, we had Auburn, Alabama, Michigan and Notre Dame, respectively. However, we decided to revisit that ranking and ultimately changed it to have Auburn, Michigan, Notre Dame and Alabama, in that order.

Gary Barta, athletic director at the University of Iowa and chairman of the College Football Playoff Selection Committee, said that this practice is rather common. The committee aims to leave no stone unturned and wants to be as confident in their selections as possible when they are made public.

Some of that confidence comes in the almost overwhelming amount of statistics available for committee members to use.

That is part of what makes these rankings so different from the Associated Press and USA Today College Football Coaches Poll (both of which the committee are directed to ignore). The selections are not made completely independently by members or based on arbitrary criteria or the “eye test.”

The votes come only after exhaustive debate and analysis of statistics. Even when teams seem relatively equal, protocols lay out specific criteria that should be used as tiebreakers – championships won, strength of schedule, head-to-head matchups and outcomes of shared matchups.

That being said, heavy reliance on statistics can often lead to the circumstance of games being ignored. The process also accounts for that.

In addition to statistics, the committee has access to game notes for every game available for them to review. This allows them to determine if factors such as weather affected the outcome of a game, or if a star player left the game early due to injury when considering their decisions.

Some of this additional information can also be provided by the conferences. While lobbying from coaches and administrators from schools is strictly forbidden, each conference (plus the independents) is assigned two committee members to act as point persons.

Committee protocols state that these point persons exist so that “the committee has complete, detailed information about each team, and the conferences and independent institutions have an effective and efficient channel for providing facts to the committee.”

Another key takeaway from my experience is the committee’s recusal policy.

In an effort to avoid personal bias influencing decisions, committee members must recuse themselves (they literally leave the room) whenever the school they are affiliated with is discussed.

There is an interesting hole in this policy, however. Members are only required to be recused from conversations about schools that they – or immediate family members – are currently affiliated with. This means, for example, that Boivin must leave during conversations about Arizona State, but can participate in any involving her alma mater, the University of Illinois. 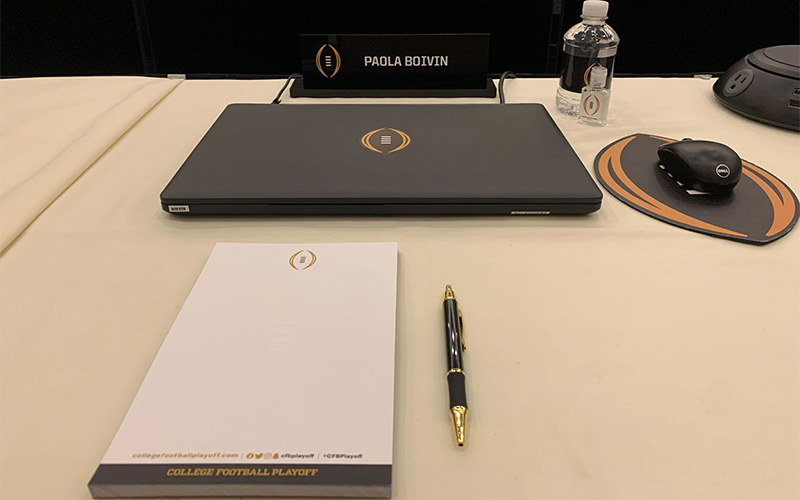 During the mock exercise, participants at at the same seats and used the same computers as the members of the actual committee. (Photo by Shawn DePaz/Cronkite News)

Regardless, Barta assured the mock committee that he had no concerns about bias influencing selections.

One last important insight I gained from the experience involves bowl placement.

In our specific situation, we selected the exact same playoff teams – LSU, Ohio State, Clemson and Oklahoma – that the actual selection committee had in its 2019 playoff. We were then tasked with placing the matchups into the semifinal bowls, for which we used the 2021 bowl locations.

The goal for bowl selection is to give the higher ranked team the most advantageous location possible. This is more or less based on the location’s proximity to the school and the ability for the team’s fans to attend the game.

This led to an interesting situation where we had to decide to place LSU versus Oklahoma either in the Cotton Bowl at AT&T Stadium in Arlington, Texas or at the Orange Bowl in Miami, Fla.

This became a major point of contention for the mock committee because, in a vacuum, Arlington was a much better location for LSU than Miami. Some members noted Arlington’s proximity to Baton Rouge and the established LSU supporter base in the area.

On the other hand, Arlington is also very advantageous for Oklahoma, not only because of its proximity but because Oklahoma would have just played in the same stadium at the Big 12 Championship game.

Our committee ultimately decided to place the matchup in Miami in order to strip Oklahoma of the advantage they might receive in Arlington, but the discussion revealed what several of the mock committee members saw as a glaring error in the process.

Ultimately, this decision is being made by people who do not actually play in the game. It is very possible that, in this specific situation, LSU may have preferred to play in Arlington and paid no mind to the potential advantage Oklahoma may have had. The current process, however, gives members no way of knowing that.

It was suggested that the committee could seek input from the schools. Barta ultimately dismissed the idea, saying that it could lead to gamesmanship from the schools or the actual bowls attempting to unfairly incentivize schools to select them.

In the end, I walked away from this exercise with a much greater appreciation for the committee and their process. While it is not a perfect one, it is a significant improvement from the old Bowl Championship Series days.

As Barta reminded us throughout the exercise, the committee’s job is to select the best teams, not those deemed the most deserving. This process gives Barta and the rest of the committee the best possible opportunity to do just that.