PHOENIX – Back in 1982, Michael Jackson’s “Thriller” album was atop the music charts, Rocky III was playing in theaters and Arizona State’s football program appeared to be on the verge of becoming a national powerhouse.

That squad lost its final two regular-season games against Washington and Arizona, letting a Rose Bowl berth slip away, but bounced back to beat Oklahoma in the 1983 Fiesta Bowl.

Members of that team recently gathered at a luncheon held at the Sheraton Hotel in downtown Phoenix to honor their Fiesta Bowl victory. They reminisced about that 1982 season, but also voiced concern about the direction they see the program going today.

This season’s Sun Devils are just 3-8, and if they lose to Arizona in their Territorial Cup showdown, they will finish with the worst winning percentage in ASU football history since 1942.

Players from that 1982 team cited several reasons they believe the program has slipped, including poor local recruiting and greater competition in the Valley’s booming sports market.

“I think one big thing for ASU is to focus on recruiting here in Arizona, because we have a tendency to lose a lot of players that are here in Arizona to other schools,” Clack said. “We have got to focus on trying to keep those players, because they are successful when they go to other teams.

“So why not be successful at Arizona State? I think once that changes, maybe we will get better.” 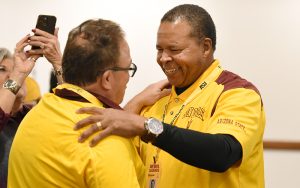 Two players from the 1982-1983 ASU football team embrace each other at the luncheon Friday at the Sheraton Phoenix Downtown to honor the Sun Devils Fiesta Bowl win against Oklahoma. (Photo by Tim Trumble/Tim Trumble Photography)

Clack has a point. Of the top 25 recruits in Arizona last season, as ranked by 247Sports.com, none committed to Arizona State. Three committed to the University of Arizona.

But recruiting isn’t the only issue. Attrition has also taken a toll.

More than a dozen players from the 2021 ASU roster transferred to different schools, including starting quarterback Jayden Daniels, who is currently enjoying a breakout season for Louisiana State, rated sixth in the latest College Football Playoff rankings.

The Sun Devils filled some of the holes with players from the NCAA transfer portal, but the lack of continuity was evident during a slow start that led to the removal of coach Herm Edwards three games into the season.

“You were able to transfer back in the day, but I think today guys don’t have as much loyalty because if a player gets benched or doesn’t get what they want, they can just transfer to another team,” said Todd Hons, the quarterback on that 1982 ASU squad. “I personally think that is wrong. You teach a kid not to just quit and go to another place. So I think that is part of the problem.”

In 1982, Arizona State football was arguably the biggest sports attraction in the Valley. The Phoenix Suns were the state’s only major professional sports franchise at the time, and during football season, Sun Devil Stadium was the place to be on Saturday night’s.

“If you grew up back in the 70s and 80s, the only thing to do on a Saturday night in Phoenix, Arizona was Sun Devil football, for the most part,” said Pat Gamle, a Sun Devils football fan since the 1970s who attended the luncheon. “This was kind of our NFL team. 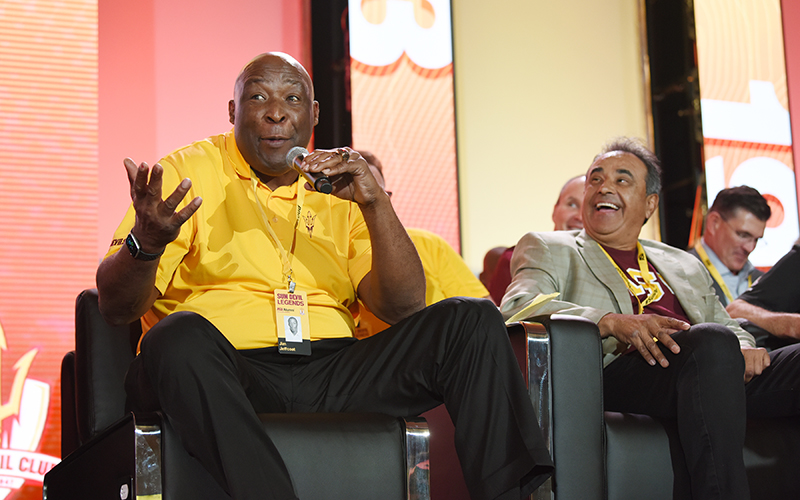 Clack believes players have changed, too. They have different priorities than players in his era. Young athletes are more focused on building their brand than on building a team and can even profit now off of their name, image and likeness.

“We played as a family, we won as a family and pushed everyone to want to win as a family,” Clack said. “That’s the part that this generation is missing out on, because it’s all about ‘What can I do on social media? Who is looking at my social media?’ And all that kind of stuff. Let’s get back to focusing on being a family and being a teammate.”

When Edwards was dismissed, assistant coach Shaun Aguano was named as his interim replacement. However, the Sun Devils are just 2-6 since Aguano took over and a coaching search is likely to ensue after the Territorial Cup game.

At least one of the 1982 players at the luncheon believes that the Sun Devils need a younger coach who can better relate to today’s players. Edwards was 64 during his first season at ASU and 68 when he was removed.

“I think we need to go to a younger coach,” said Jim Meyer, a tight end on the 1982 team. “Football has changed over the years. You look at the NFL and the league has a lot of young coaches. Let’s go to a young coach and start all over again, flush the system and get someone that can build a program.”

The program’s slide into mediocrity is also evident in the many empty seats at Sun Devil Stadium. Average attendance slipped to 43,081 this season, the team’s worst since 1968.

Aguano attempted to reassure the Sun Devil legends at the luncheon and urged patience in the program.

“We’ve seen a huge change in the culture, the way that kids love each other,” Aguano said. “They’re playing for each other, making sure that we’re relentless in everything that we do in the classroom and on the football field. It will take time to change. But these guys are proud Sun Devils.”

One voice from ASU’s distant past offered a more realistic assessment. Larry Kentera, a 98-year-old former ASU player who was an assistant coach during the Frank Kush era, addressed the players at the luncheon.

“You know where we are right now, be honest with ourselves,” Kentera told the 1983 Fiesta Bowl champs. “You’re looking out there right now and are seeing what they’re doing.

“But we are going to get there. The Sun Devils always get there.”