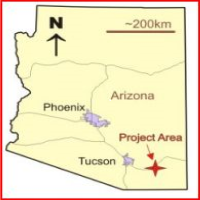 The I-10 copper deposit is located along Interstate 10 between Benson and Wilcox, Arizona. If you have ever visited the rest stop known as “The Thing” and gazed into the valley to the east, you have seen the ground underlain by this deposit.

The Johnson camp deposit lies just across the highway to the north. Copper, zinc, silver, and tungsten have been mined at Johnson Camp since at least the 1880s and mining still continues on a small scale. At one time this area was one of the principal tungsten mines in the United States. 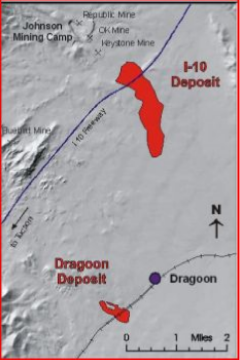 James Sullivan of Scottsdale, AZ had an interest in this area. He noticed that the mineralization at Johnson camp occurred in tactites (metamorphosed carbonate rocks) and surmised that those rocks continued under the alluvium-filled valley to the south where there are no outcroppings of rock. But, because the mineralization occurs in tactites, the deposits have a magnetic signature. Geophysical surveys detected a large magnetic anomaly under the valley.

Beginning in the 1960s, Sullivan began acquiring mining leases and staking claims until he controlled the valley by the 1990s. Talk about persistence. Along the way he interested several major mining companies in exploring the property, one of which I worked for at the time, Phelps Dodge. I ran the Phelps Dodge project of drilling new holes and modeling all past work to estimate the copper resource there, which is considerable. More about that later.

Precambrian and Paleozoic sediments lie beneath the alluvium and dip easterly at up to 30 degrees. The sediments are bounded on the west by the Texas Canyon, quartz monzonite the generating intrusive. This formation is well-exposed at the state rest stop a few miles west of “The Thing.”

Mineralization follows favorable horizons in the host rocks and occurs roughly as a blanket dipping to the southeast. The shallowest and highest grade material occurs at the north end of the deposit under Interstate 10.

Paleozoic limestones are the best host for copper mineralization. During mineralization, most of these rocks were metamorphosed and the process created magnetite which gave the magnetic signature of the mineralized zone.

Sullivan did not want to dig holes. His vision was to extract the copper by in situ leaching, the same as is being proposed for the Florence, Arizona, copper deposit. A potential problem with that vision is the carbonate host for the mineralization which would itself consume the acid leach solution leaving little to dissolve the oxide copper minerals. However, metamorphism has turned much of the carbonate rock to silicate rock which will not consume acid.

James Sullivan passed away recently before he could see his vision come to fruition. The properties are now held by the James Sullivan Trust.

A smaller (so far) similar deposit occurs southwest of the Town of Dragoon. The main line of the Southern Pacific Railroad,passes over this deposit. This, too, is part of the Sullivan property and may be further explored if the I-10 deposit goes into production, something that is still being examined.

This property still has a long way to go to study the feasibility of extracting the copper. If it turns out to be worth the effort and money, it is sure to stir controversy. But perhaps Cochise County officials will be more amenable to creating new jobs and industry than officials in Pima County seem to be.