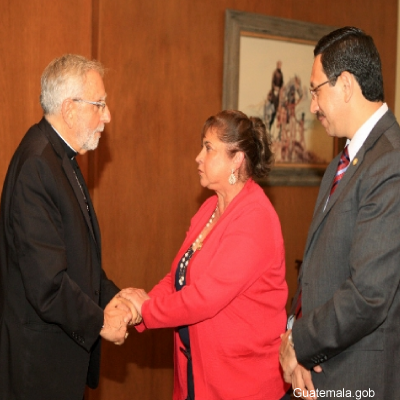 The First Lady of Guatemala, Rosa Leal de Perez, visited southern Arizona on Wednesday as part of a four day trip to the United States. The first lady came to “personally verify the conditions” under which the children who fled her country are “retained by the Border Patrol after crossing into the U.S,” according to a statement released by the Guatemalan government.

According to the Guatemalan government, “The migration of children has grown in the last three years and is now entering a daily average of 90 children are crossing the U.S. border, who add to the 52,000 who have already entered the country mostly from Guatemala, El Salvador and Honduras.”

The wife of the president of Guatemala, Otto Perez Molina, met with the Bishop of Tucson Gerald Kicanas, who “reiterated the support of the Church to the problem of migration of unaccompanied minors to that country, and indicated that it will begin the talks with the U.S. government to coordinate assistance for the rights of migrants and prevent further deportations,” according to the statement from the Guatemalan government.

Perez Leal wants to “highlight the situation from the perspective of her Central American country.”

The Guatemala government will not make any effort to advise their citizens to stop coming to the U.S. until at least July 8, 2014. In fact, in the Guatemalan government’s statement they note that the president of Guatemala, Otto Perez Molina, has led the effort to secure agreements such as the “Special Declaration adopted at the Summit of Central American Integration System,” on June 27, 2014.

According to Reuters, “The leaders of the full members of the Central American Integration System (SICA), meeting in Punta Cana (east) adopted a special declaration spurred by the drama that immigrant children traveling unaccompanied to the United States live.”

In his speech at the meeting, the president of Guatemala, Otto Perez Molina, said that countries in the region are “uniting efforts and strategies” to address the situation, according to the report. “ He said the issue should be addressed in a comprehensive way, but always respecting the rights of minors.”

Fronteras reports that Perez Leal said, “There needs to be a strong campaign to raise awareness, if people don’t want to help, then they shouldn’t oppose it. They need to understand that these children are not delinquents, they didn’t come to do anything bad in this country, they are simply coming to see their family.”

The First Lady also was expected to visit the future home of many of the unaccompanied minors, located just north of downtown Tucson. The former apartment building for college students is heavily guarded and reporters were kept at a distance. She also visited the Greyhound Bus station, where Border Patrol agents drop the newly arrived families off the be dispersed across the country.

The Guatemalan government’s statement emphasized Kicana’s role in the event. “It’s important that our country receive, assist and care for your children, as they have a family and we need to help the meet with their parents if they are here in the United States,” he said. “The church is a family and does not recognize differences between countries, we hope that the bishops of Mexico, Guatemala, Honduras and El Salvador to discuss how we can work together to improve the situation, it is important that they explain the situation to the Americans” said the bishop according to the Guatemalan government.

Kicanas told Tucson’s Catholics in a newsletter, “This situation reminds me very much of how countries such as Turkey, Jordan, Lebanon and Egypt are working to assist the enormous number of people crossing their border, fleeing the horrendous conditions caused by the civil war in Syria. Those countries have no obligation to help the people flooding their borders, but the countries have seen the desperate needs of those arriving and have spent millions of dollars and have utilized their country’s resources to provide humanitarian aid. So it is for us now.”
.
However, Perez Leal denies that the children from Guatemala are fleeing violence. She says they coming in search of more opportunities.

The First Lady said that the migration of children to the United States has risen due to the children’s hope to reunify with family members in the U.S., according to the official statement by the Guatemalan government.

Last week, the AZDI and James T. Harris of 104.1 KQTH, reported that the U.S. government had been preparing to transport to the Nogales facility for some time. According to Governor Jan Brewer the arrival of hundreds of unaccompanied minors came as a surprise to her.  According to sources, between 140 to 200 children are processed through the Nogales facility daily, and the stream of minors is expected to continue through the summer.