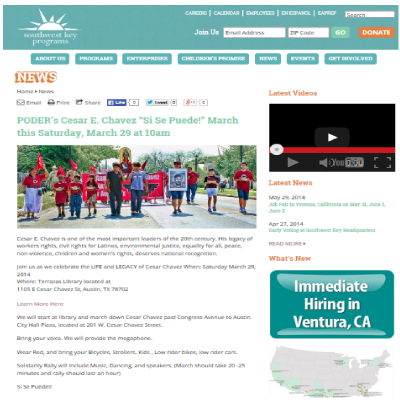 A guard sits in front of the College Place, the new Southwest Key facility north of Downtown Tucson, as it is undergoing final preparations for housing a portion of the unaccompanied children from Central American who have been processed through the Nogales Border Patrol Station.

Guards are not allowed to answer any questions, nor are they even allowed to direct visitors as to whom questions might be referred.

Recently, Southwest Key announced that they currently have 272 job openings for their facility in Tucson alone. The organization is advertising for cooks, caseworkers, administrative assistance, care providers, educators, and a more. According to Southwest Key’s job descriptions posted online, many positions require that employees are bilingual and have previous childcare or case management experience.

Employees are being hired by Southwest Key for the Unaccompanied Minors Shelter Program with jobs available in Mesa, Glendale, Tucson, and Phoenix.

The Department of Health And Human Services through/Administration for Children and Families is also hiring ten Field Program Specialists in Tucson. Field Program Specialists “will provide authoritative advice to DCS-contracted case coordinators and DCS care provider programs in the development and implementation of care and placement plans for unaccompanied children.”

According to the Southwest Key website, they operate “68 juvenile justice and family programs, safe shelters for immigrant children, schools, and community building initiatives.” Over 200,000 kids and their families receive services annually in Texas, California, New York, Georgia, Arizona, and Wisconsin.

Southwest Key was started by Dr. Juan Sánchez, who “shaped by his experiences as a young migrant worker,” according to the website. Sanchez, listed on the website as “El Presidente/CEO,” graduated from Harvard University with a doctorate from the School of Education.

In the 1990s, Southwest Key opened shelters for unaccompanied minors. According to sources, Southwest Key works closely with the Division of Children Services/Unaccompanied Alien Children program within the Office of Refugee Resettlement, which is an office of the Administration for Children and Families/Department of Health and Human Services. The Homeland Security Act of 2002, Section 462, transferred responsibilities for the care and placement of unaccompanied alien children (UAC) from the Commissioner of the Immigration and Naturalization Service to the Director of the Office of Refugee Resettlement.

Southwest Key is the largest provider of shelter services to unaccompanied minors in the United States.

Much discussion has centered on the recent efforts by Tucson Unified Governing Board member Adelita Grijalva to have Southwest Key use the district’s empty schools as shelters for the unaccompanied minors once they have been processed through the Border Patrol Station. Grijalva and her father, former TUSD Governing Board member and current Co-Chair of the Congressional Progressive Caucus, Representative Raul Grijalva, have used the District’s schools for years to promote their economic interests or political agenda.

Until the vast majority of unaccompanied minors in Southwest Key’s care eventually begin filling up the empty TUSD classroom seats, long ago abandoned by residents of Tucson, among the positions open at the Tucson facility is Lead Teacher.

The Lead Teacher is a professional leader in organizing the Education Department in partnership with Program Director or designee. The Lead Teacher is responsible for curriculum development which facilitates instruction appropriate for students with a variety of academic competencies, backgrounds, skills, and learning needs. To design and implement daily instruction of all core subject areas to include: ESL, PE and Vocational Courses. The Lead Teacher is to promote a positive climate of learning and excellence where students have the opportunity to enhance their developmental growth.

Grijalva should take heart however.

While she may not get her hands on the kids right away, she should take comfort in the fact that Southwest Key “provides a transformative education,” which is “culturally-relevant.” Grijalva has fought hard for the transformative Critical Race Pedagogy which now serves as the basis of the District’s Culturally Relevant Curriculum.

According to sources, between 140 and 200 unaccompanied minors are being processed in and out of the Nogales Border Patrol Station daily. Of those, according to the Office of Refugee Settlement past practices, only a small percent will be returned to their country of origin.

At the current rate of intake, approximately 36,000 children will be processed though the Border Patrol Station. Of that, an unknown number of innocent children, who were sent here by parents hoping for a better life and the American Dream, will learn mostly of the great injustice fostered by our system, and be compelled to become agents of change.