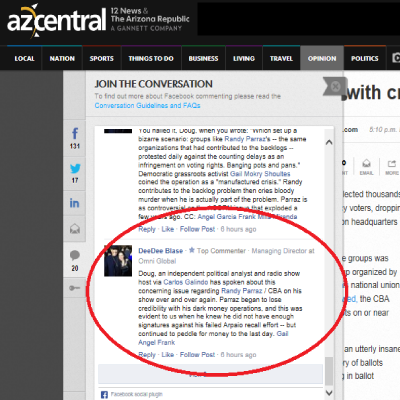 After Maricopa County Chair A.J. LaFaro exposed ballot harvesting by Citizens for a Better Arizona (CBA), the group’s founder Randy Parraz leapt into action. The first thing he did was call the Arizona Daily Independent, which broke the story, and demanded a retraction.

After Parraz failed to make compelling arguments as to why the article should be retracted and he became less than civil, ADI staff hung up on Parraz. He then went into high gear and called out CBA friends, including minors and the elderly, to join him Maricopa County GOP headquarters to deliver a demand letter to LaFaro. He wanted an apology for the volunteer, Ben Marin, who LaFaro had described as “rude.”

LaFaro wasn’t in the office, and in his excitement Parraz forgot to leave the letter. Foiled again.

Parraz’s antics have once again raised questions about his tactics. In response to a piece about Parraz by popular Arizona Republic columnist Doug MacEachren, another fringe activist, DeeDee Blase, went on the attack. But she didn’t attack MacEachren. Parraz was her target and she revealed what some knew and others believed to be true but was too afraid to say it aloud for fear of being called a racist or some other horrific hater.

Doug, an independent political analyst and radio show host via Carlos Galindo has spoken about this concerning issue regarding Randy Parraz / CBA on his show over and over again. Parraz began to lose credibility with his dark money operations, and this was evident to us when he knew he did not have enough signatures against his failed Arpaio recall effort — but continued to peddle for money to the last day.

Parraz first gained attention for his successful recall of Arizona State Senator Russell Pearce. Pearce, as Senate president, was in Parraz’s crosshairs for the successful passage of SB1070, Arizona’s controversial immigration law. While that law was simply a mirror image of federal law, and other states had passed it without drama, Blasé, Parraz and other open-border proponents vigorously opposed it and Pearce made an easy target.

Parraz and chamber of commerce-type members of the Republican Party joined forces to unseat Pearce.

Parraz was hot. He won and the taste of blood must have been a great motivator, so he moved to recall the self-promoting and mysteriously popular Maricopa County Sheriff Joe Arpaio.

Arpaio was no Pearce and had no real republican opposition. As a result, Parraz failed miserably in his effort to recall “America’s Toughest Sheriff.” According to multiple sources, despite not being remotely close to getting enough signatures before the deadline, Parraz kept the fundraising for the effort going until the last day.

Anything related to Arpaio brings in the big bucks on both sides of the aisle.

Not long after his failure on the Arpaio front, Parraz took his dog and pony show down south to Tucson. He tried once again unsuccessfully to raise a ruckus, but centered on the Mexican American Studies classes that were dismantled by the Tucson Unified School District. A handful or people showed up to his rally, and Parraz slunk back to Maricopa County.

Since that time, Parraz has been relatively quiet for a guy who makes big noises. Quiet until last week when his group inadvertently showed on tape just how ugly ballot harvesting looks in real life. Parraz exacerbated the revulsion with the ugly underbelly of CBA, when he showed up with kids and the elderly for an apology from a guy, who was only telling the truth.