The sight of young people walking up and down residential streets harvesting ballots for the upcoming City of Phoenix Election on Tuesday took one Phoenix resident by surprise on Sunday. Despite the strict warning by the Phoenix City Clerk last week that “If a voter needs someone to return an early ballot for them, it should be someone they know or trust.”

The warning came as a result of reports from Phoenix voters that individuals have come to their doors stating that they work for the elections department, or some official election-related organization, and that they are there to pick up the voter’s early ballot to return it. The individuals were also reportedly asking questions about how the resident voted.

Out for a Sunday afternoon drive on the streets of Phoenix with a friend at approximately 1:00 p.m., in the area of 14th Street and Dobbins, Phoenix resident and registered voter Tristan Manos was shocked to see a young man standing on the sidewalk, taking cover to shade himself from the blaring hot Phoenix sun, holding a stack of City of Phoenix Election ballot envelopes on a clipboard in one hand and a smartphone in the other. Manos turned the car around, interested in trying to understand what was going on. According to Manos, he and the young man struck up a polite conversation, based upon mutual respect. Manos said the young man explained that he and his fellow ballot harvesters were assigned an area by paperwork or smartphone in which to collect ballots. He said he introduces himself as a representative of CASE (Central Arizonans for a Sustainable Economy), and advises the person that he’s there “to help with the person’s ballot [the household’s ballot].” That ‘help’ includes collecting the ballot if the resident has already voted, or to actually ‘help’ them vote. They claim that the CASE representatives “only” go so far as to tell the resident to vote ‘Yes on all Props’ (including the highly controversial Prop 104), but “to never tell anyone how to vote for mayor or city council.”

The CASE ballot harvester was happy to pose for a photograph by Manos, “smiling (proudly?) as he held his take.”

The young man advised Manos that Monday, August 24 will be a “FULL DAY” (emphasized by CASE ballot harvester) of the same work in assigned areas throughout Phoenix. The representatives are expected to work a half day on Tuesday, the 25th, the official day of the election.

Resuming his drive, Manos and his friend spotted a young female CASE representative walking the neighborhood just one minute later. In a short — also mutually polite and respectful — conversation, the young woman repeated the same basic story to Manos. On a down note, she had only succeeded in collecting one ballot so far and was on her way in pursuit of more. Her last words, in a rising tone, emphasized the importance of each and every vote, adding that “every vote counts.”

Manos wondered if these young people “realized what they were getting themselves into and, beyond themselves, what overall, far-ranging implications were at stake,” cutting them some slack for what one may imagine to be how the ballot harvesting was represented to them by the higher-ups at CASE, and whoever or whatever may be in control of CASE.

CASE is technically a nonpartisan group, whose Board reads like the who’s-who of local unions. AZ Rep. Ruben Gallego (D) is the chairman of the CASE Board of Directors.

Somehow, Arizona is the only remaining state in which harvesting is legal. However, if someone goes so far as to assist in the preparation of a ballot, they must sign the ballot envelope, self-identifying as a ‘voter assistant,’ providing their own name and address under penalty of perjury.

Manos said the most remarkable part of the encounters “was that there were people in the privacy of their own homes giving away their votes to complete strangers.” He added further, “How will they get to see where their vote goes and how will they get to see that it actually gets counted if they just give it away like that?” He questioned how a voter whose home for all intents and purposes becomes a polling place will be free from any form of electioneering by CASE representatives; electioneering obviously pre-biased to promote what CASE is promoting — voter’s interests, voter’s rights, and the essential will of the people potentially being given a back seat (thrown out?) and sacrificed on the altar of a special interest group’s political agenda. 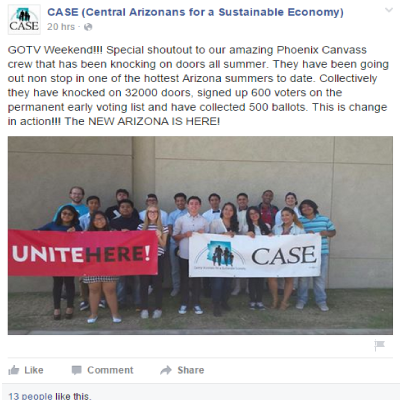 “Imagine just this one of a wide-ranging multitude of hypothetical — and, all-too-real — potential scenarios: 1) somehow, the CASE representatives see or are told how people voted, 2) in this particular election, CASE is directly promoting ‘yes on all props’ and, maybe — in some way — promoting candidates who themselves also promote the same ‘yes on all props,’ 3) so, given all that, what’s in store for Phoenix voters who think they’re freely exercising their right to vote — 1 of the ultimate rights we all possess — and what if their vote is — as CASE sees it — ‘in opposition’ to CASE’s political agenda?”

“It’s a matter of common sense for us to think, in a scenario like this, if people are asking for help in voting, they would just reach out to the usual go-to people: trusted family members or friends. To just go and give their votes away to complete strangers?” That thought, the thought of giving away a most prized possession — the American people voting for their own future and for future generations — shakes Manos to his core. “Phoenix residents deserve better and must commit to take personal ownership and responsibility for their vote and see it through to the end to the greatest extent possible, be it by themselves, first, or be it by the closest of family and friends, if it gets to that. Giving it away to random strangers is like giving away America, giving away Arizona, or giving away Phoenix to random strangers, one vote at a time,” he said. Think that sounds like dramatic hyperbole in ‘The Twilight Zone?’ Think again: take CASE’s own word for it, or as things go in the Twitterverse, CASE’s tweet posted at its official Twitter profile: @case_az: ‘Our PHX Canvass has knocked on 32,000 doors, got 600 voters on the PEVL and have collected 500 ballots. #NewArizona'”