…We’re coming to the finish line 🙂

On Tuesday evening, the Arizona Secretary of State’s Office announced that there remains over 100,000 ballots left to count.

The Secretary of State and Corporation Commission races are still too close to call.

The 2018 General Election has been shrouded in controversy. That controversy stems largely from the actions of Maricopa County Recorder Adrian Fontes. On Monday, The Washington Free Beacon reported that Fontes’ questionable practices and failures are being called into question by members of the Maricopa County Board of Supervisors.

According to The Washington Free Beacon report, “The chairman of the Maricopa County Board of Supervisors emailed County Recorder Adrian Fontes on the Monday before Election Day, expressing concern over the emergency voting centers Fontes established.” 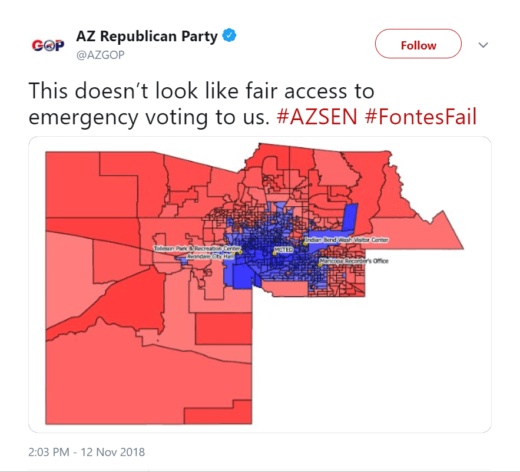 According to the document that was obtained exclusively by The Washington Free Beacon, Maricopa County Board of Supervisors Chairman Steve Chucri sent an email to Fontes “formally asking” him to “place aside all ballots cast at emergency voting sites after early voting ended on Friday, November 2, 2018, until your legal authority to open emergency sites has been clarified.”

Ballot harvesting is illegal in Arizona. Experts argue that Fontes set up ballot harvesting sites for “emergencies” in primarily Democratic Party precincts. The Arizona Republican Party tweeted out an image of where the “emergency/harvesting” sites were located.

At the same time, many voters are reporting that their legally cast ballots are not counted according to the Recorder’s website.

About ADI Staff Reporter 601 Articles
Under the leadership of ADI Editor In Chief Huey Freeman, our team of staff reporters work tirelessly to bring the latest, most accurate news to our readers.