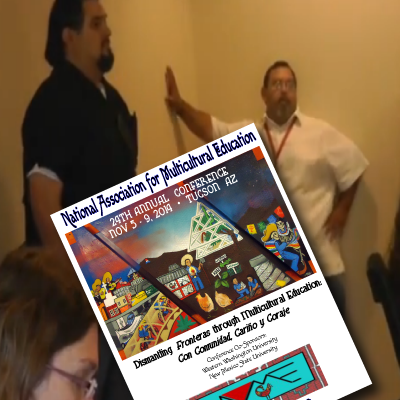 At the time the Tucson Unified School District Governing Board voted to end the radical Mexican American Studies classes it was widely believed that the classes would simply be relabeled and offered one way or another. At the recent National Association of Multicultural Educators conference, event organizer and TUSD principal Augustine Romero admitted that the classes are back and were never really gone.

In a heated discussion with Raza blogger David Abie Morales, Romero states, “The culturally responsive pedagogical instruction, the theoretical framework, the pedagogical understandings, the pedagogical realities are back. That’s the God’s honest truth.” Waving his arms, Romero insisted, “It’s back.”

When Morales challenged Romero’s claims, and alleged that the classes were not back, Romero responded, “That’s semantic bullshit. The theoretical framework is back, the practical applications are back, everything is back. Just because we don’t name it something doesn’t mean it’s not back.”

When Morales says, “If it was back the State would ban it.” Romero responds, “It doesn’t matter what the State does?”

Newly re-elected Michael Hicks says it does matter what the State does because there are millions of dollars at stake for the District. “We never approved the curriculum. The administration has withheld it from us. If they have been offering the same classes only under a different name, our parents, students and stakeholders will be outraged. They should be outraged,” says Hicks. “the families on the district did not support the classes. They had the support of a few radical teachers and profiteers.”

Hicks is calling for an investigation of the matter by the Arizona Department of Education.

In 2012, the Arizona Department of Education conducted an investigation and found that the Mexican American Studies classes violated the state law which prohibits the teaching of hate. According to children who took the classes, they were taught to resent the oppressor “White Man.”

At the conference, which featured radical educator Bill Ayers, the former TUSD Mexican American Studies director, Sean Arce told attendees, that he and his teachers provided a “liberatory education. This framework that we provided is being used across the country, the possibilities are endless because this battle was lost here. We are still struggling for that humanity, for the rehumanization, for decolonization and we are going to continue.”