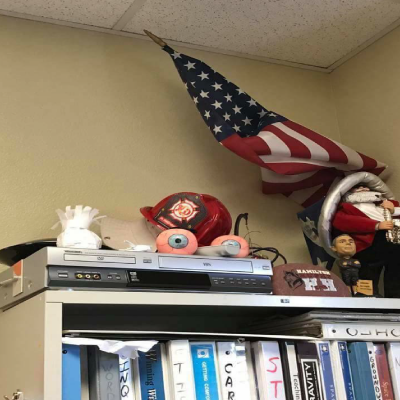 As a substitute teacher for many years in Arizona’s K-12 system, I have seen just about everything. Over the years, I have noticed that our classrooms have become hotbeds for teachers to express their own personal political beliefs.

Today, I am subbing at a high school, in a unified school district for a teacher of both Investigative and Environmental Science. His students range from freshmen to juniors with over 30 students per period.

The teacher, Corky Miner, has an aide in the room with the freshmen students in periods 1, 3, and 5. The aide is a very nice woman about age 55-65.

Miner comes into the room before class starts and blazes around the room, lamenting to me about how he has to observe other teachers today for his PLC (Personal Learning Community) and he would rather be in his classroom. I understand and tell him how when I was teaching, I did that as well. I say how it was interesting and helpful, he snorts and runs out of the room.

The day begins as a new student comes into the room wondering what she should do and where she should sit. A few other students start filing in before the bell, chattering and smiling. The aide focuses on the new student telling her a mountainous pile of information about classroom procedure, the teacher and expectations. She warns the student about Mr. Miner and how she must listen to him and be quiet or he gets mad. Specifically she says, “Always do what he says and never question him or he gets mad.” The girl’s eyes get big as she has never met the teacher and it is period one of her first day. She sits in the back as the aide stays with her; guiding her through all of the information and class protocol for about 5 minutes.

The final bell rings and the kids are getting their folders out and composition books ready. The day’s plans are on the board so they know exactly what is expected of them, but the aide is still shouting directions at them. I stand back and smile at the kids but do not want to step on her toes. It seems she does this every day and it is normal part of their routine. The students largely ignore her.

The aide breezes through the instructions and starts passing out papers and I try to interrupt her. I need to take attendance. She looks at me funny and continues to pass out papers. I just smile at her and begin.

The students are talking quite a bit so I quiet them and start calling the attendance. They listen to me and I joke as I fumble through some of the more complicated names. We enjoy a little getting to know each other but the aide looks frazzled. When I am done, I tell the kids to listen to the aide and get to work, and they do. It was a very well-behaved freshman class for a while so there were no worries. I mill about the room trying to look helpful, but in reality, I have no idea how to do the work. The students do not seem to mind so I continue to look about the room offering a reassuring smile.

As I mill about the room, I notice a large poster on the wall with the name “Donald” on it. Huh I think, that’s our new president’s name. I look closer. It is a scene from the Wizard of Oz and says, “Wicked Donald of the West.” There is his face cut and pasted to the witch’s face and it says, “I’m melting” while an evil looking Dorothy looks on with a bucket that says, “News: Alaska Glaciers Vanishing” and Dorothy saying, “Warned You…” Dorothy’s dress says ,”The rest of the World” and Toto is saying, “You’re Right, we’re not in La-La Land Anymore.” The Witch/Donald Trump’s dress says, “Credibility on Global Warming.” 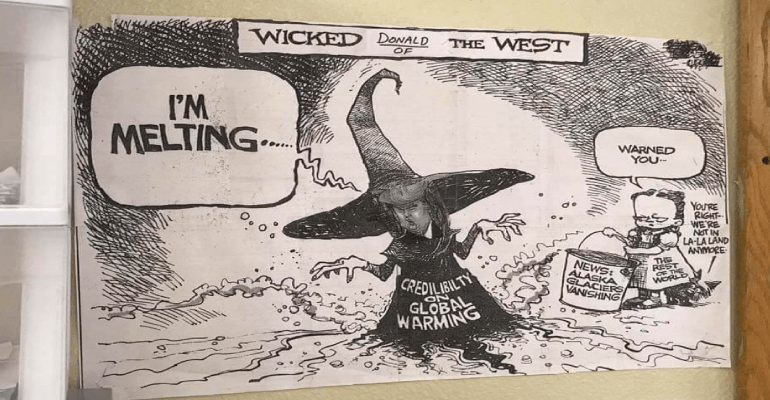 The aide walks over to me as I’m examining this poster and says, “Oh, I see you found his political posters.” “Yes,” I reply, “this is very inappropriate in a public school classroom.” She says, “I think so as well but you know, he teaches environmental science so I guess it’s ok. Even though I do not agree, I don’t say anything.” I reiterate how it is not cool and how he is supposed to be unbiased, politically. I tell her that I was a teacher and by contract, they are not allowed to have posters or teach in a biased manner. She tells me that he teaches global warming or climate change, all the time, and lays the blame on the president and right-wingers. Again, I tell her it is not cool and she says she agrees with me but, what can she do?

I continue walking about the room and as the day goes on it is time for us to say the Pledge of Allegiance and hear the daily announcements. I search the room for the American flag, to no avail. I ask the kids and one points to the upper corner of a shelving unit. There it is, crumpled and barely recognizable behind a Santa statue with a wizard hat on and a bobble head.

I begin to see other signs of what appears to be anti-American sentiment. I go over by the sink and front door and find the Arizona state-mandated US Constitution poster which is supposed to be placed beneath the American flag. In this classroom it is hidden behind a plastic drawer unit. It is nowhere near the flag.

As I continue looking about, I see another poster with “Donald Trump” on it. It is a Smokey the Bear poster, cut and pasted to have Smokey say, “Only You Can Prevent…Donald Trump.” It is a scene of a burnt forest with ruined tree trunks that say, “Global Warming,” “EPA-Bashing,” “pollution,” “denial,” “fire,” “drought,” “inaction.” Upon closer inspection, the name “Donald Trump” was taped over another name; “George Bush.” 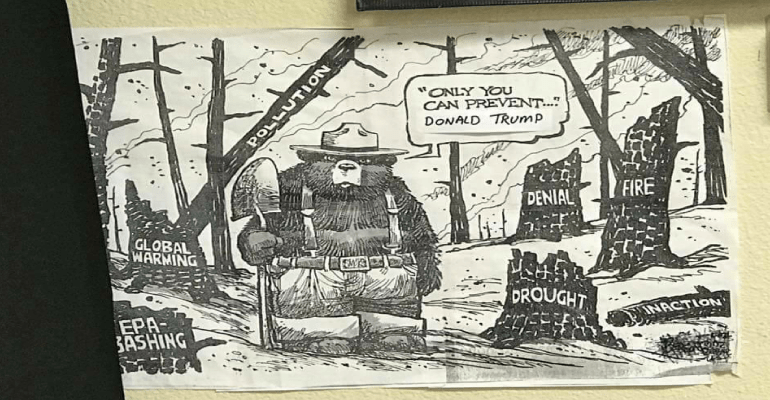 It seems this teacher has intentionally had these posters up in his room for at least 10 years, if not more. With no counter point of view, the material can have no other purpose than to indoctrinate students. I would be curious to know if he had positive or negative posters on the walls when Obama was president. As I take pictures of all of this propaganda, I become further frustrated. I feel I must speak out. It doesn’t matter what side of these issues or politics I may be on, it is ethically and morally wrong to have these posters in front of impressionable children, every day.

School is to be a place of learning the curriculum and along their path to adulthood; students will form their own opinions about politics, life, and environmental issues. A teacher should never be the one to form those opinions for them. A teacher is one of the most influential people in a child’s life and should inspire them to dig and learn about all topics, not just promote one point of view or teach intolerance for other points of view.

As an aside, the teacher came back to the classroom before 5th period and informed me that he would be having an observation by the principal, vice principal and other science teachers. He said I could stay if I wanted to but didn’t have to. I checked and decided to leave. I figured waiting until the next day would give the administration enough time to notice the posters and understand what I was talking about. The next morning, I sent the following email to the principal. 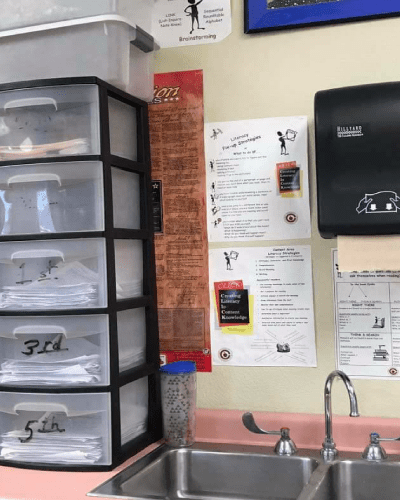 I am a substitute for the Chandler School District and have a problem I observed in your teacher’s classroom, yesterday.

I was a teacher in the Paradise Valley and Higley School Districts for many years and know what boundaries a teacher must walk within and what is outside those bounds. Mr. Miner has political, anti-US president posters on his walls. As well, he has shoved the American flag in a corner and covered the US Constitution poster, which must be prominently displayed.

I would like to speak to you personally, today and am available to talk or meet in person.

I thank you for your attention.

I was out of the office all day today. This situation has been resolved and Mr. Miner was very apologetic. If you sub at Hamilton again please stop to introduce yourself to me. Thank you.”

Thank you for your response but I would like to know how the problem was resolved? His actions are a violation of policy and law, according to his own syllabus, the state of AZ and the teacher’s union. Teachers are required to teach content according to state standards and remain unbiased on all matters.

While I appreciate your answer, I do not think you are aware of the scope of what this teacher has been doing in his class. While I was there, two freshman students got into a very heated religious discussion (Period 3) which escalated and neither me or the aide in the room could stop until I got very loud. According to other students, this is normal and happens all of the time and is not stopped. The discussion turned to gender bias as well. I asked other students and they said, Mr. Miner doesn’t mind.

I also looked closely at his posters (pictures attached) and it seems they have been up since George Bush was president which was almost 9 years ago, and he served an 8 year term. He also shows videos and preaches about Global Warming/Climate Change and the political positions involved.

While my own political position has zero bearing here, an administrator should be aware of what their teachers are posting on their walls and make sure their teachers are not spreading propaganda of their own views. These posters are very large and placed right by the doors where students and all could see them, every day, for the past 10-16 years.

I have been a substitute teacher at Hamilton, Chandler High and various Chandler schools, for the past six years and have never seen such a blatant disrespect for our United States, by a public school teacher.

By the afternoon, I hadn’t gotten a reply so I CC’d the email to another Vice Principal at the school. By 5:30 p.m., a response finally arrived. Feeling like I had been snowed, I was not satisfied with the answer. They really wanted me to by the “fact” that the teacher is “apologetic”?

This teacher has intentionally been spreading propaganda based on his own personal views, for many years. I doubt he’s apologetic or intends to stop speaking the garbage to the students.

The next morning, I sent another email asking for further clarification regarding compliance, including a picture. This time I CC’d the district’s superintendent, Chandler’s mayor and city council members, along with a few choice activists in the education community. The subsequent response was pretty much the same as the first one.

I decided to tell of my experience on Facebook and in order to let the public know what is happening in our kids’ classrooms. The reactions of the administrators made it clear that too few understand the concept of indoctrination or tolerate it. I probably wouldn’t say a word other than talking to the teacher or principal but this teacher’s actions were intentional, long term, and the administrators clearly failed to recognize just how wrong it is.