These turtles, which grow up to about six inches long, are called box turtles because the lower shell (plastron) is hinged which allows the turtle to completely close up if bothered by predators. The brownish upper shell (carapace) is highly domed and usually has white to yellow stripes radiating from each scute. Box turtles can live for 50 to 100 years. 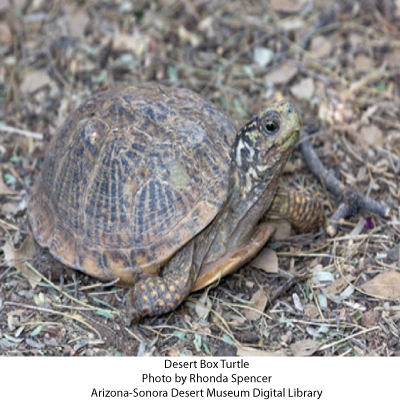 According to Arizona Game & Fish (AZGF), “This species exhibits sexual dimorphism [males and females have different colors or patterns]; the male has a bluish head, red or orange eyes, a concave plastron, and a long, curving, inner hind claw. The yellow radiating stripes on the shell of males disappear with age. Females have brown or yellow eyes and flat plastrons, and generally retain the yellow lines.”

Box turtles occur in a variety of habitats including desert grasslands, desertscrub, and evergreen woodlands up to an elevation of about 7,100 feet. They require loose soil in which to dig burrows.

Box turtles reach sexual maturity around age seven or eight. Females lay an average clutch of 2-3 eggs (up to 8 maximum) during the monsoon season. Hatchlings are dark colored with a yellow stripe down the center of the shell.

Many people keep box turtles as pets. According to DesertUSA, “…a collected wild one will almost certainly fare poorly in captivity. Within a short time, it may suffer from infections, dehydration and malnutrition, showing symptoms such as gasping, swollen eyes, a white tongue and a runny nose.

“A captive-bred hatchling, by contrast, often proves much more adaptable. It can thrive in a well-fenced outdoor space equipped with logs or flat stones for hiding places, loose soil or leaf litter for burrowing, and shade and shallow water for a cool summer retreat. It can be fed, preferably in a sheltered location, some cat or dog foods, commercially available insects, and some fruits and vegetables. Its chances for long-term survival are enhanced if its owner has the knowledge to meet its needs.”

“A western ornate box turtle collected in its home range then released in another range will try instinctively to return to its birthplace, often meeting hazards (for instance, a busy street) that will jeopardize its chances for survival.”

“The turtle produces a growth ring each year on each of the scutes of its carapace, so its age can be estimated by counting the rings.”

“One of the major threats to box turtles is landscape level changes to their habitat, such as large-scale development and the creation of roads that cause habitat fragmentation and isolate populations. Other threats include mortality from automobiles and collection from the wild. Box turtles are often encountered crossing roads in suburban and rural areas in southeastern Arizona, especially during the monsoon season. Unfortunately, many people mistakenly believe that a box turtle they encounter on the road can be helped by bringing it home. However, bringing a box turtle home means it must always remain in captivity, because a captive turtle can never be released back into the wild. Please leave wild box turtles in the wild; not only is it illegal to collect them, it hurts wild populations.” 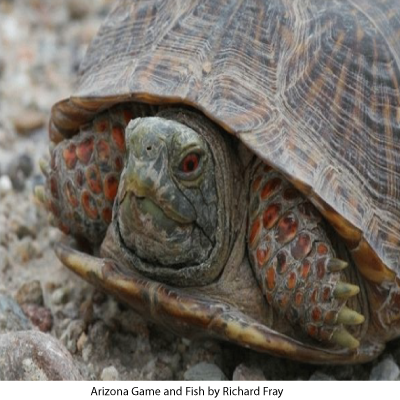 You can see many photos of box turtles in Cochise County, AZ, here. AZGF has some good close-up photos here.