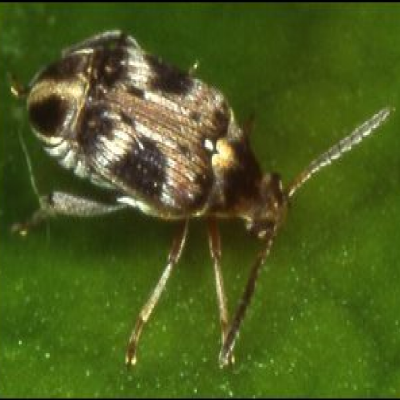 You may not have seen a bruchid beetle, they are very tiny, but you probably have seen evidence of their passing. Have you ever noticed holes in mesquite pods?

The female beetle lays eggs on fresh, green bean pods. The larvae hatch, burrow into the pod and feast on the beans. After pupation, the young adult beetle drills its way out. After that bruchids normally feast on flowers.

The O’odham people routinely ate tiny bruchid beetles along with the mesquite pods they inhabit. 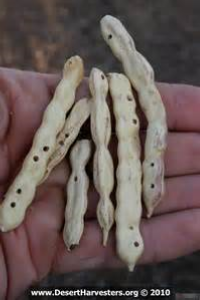 There are over 1,000 species of bruchids worldwide and sometimes they are numerous enough to be of concern to bean growers. The beetles range in size from 1 mm to 22 mm.

Besides lequmes, the beetles also eat other seeds such as palm seeds (see research paper here).

The beetles have a rather strange sex life.

“The bruchid beetle has a unique way of reproducing. The penis of the beetle has spines on it which puncture the female reproductive tract during mating. The females kick at the males during copulation. If they are prevented from kicking, copulation lasts longer and the female sustains more severe injuries. Researchers found that when males have the spikiest penises, the females had more padding in their reproductive tracts. According to the studies, the spiky male genitalia are less damaging to females with more padding, which results in those females surviving and producing more offspring. This phenomenon is known as sexually antagonistic co-evolution.” (Source)

A research article from ScienceNordic shows lurid photos of beetles copulating and of the formidable spikes on the penis. The research involved penis pumps.

These researchers found that “the longer and more destructive the spines, the more success the male beetle has.”

They found that the males with the longest spines on their penises fertilize the most eggs and get the most offspring.”

…the long spines cause severe damage and tear bleeding holes inside the female. But why evolve such a cruel penis that hurts the female? It doesn’t appear to have much of an evolutionary advantage, yet the female beetles, strange as it may sound, are ready to mate again before a full day has passed.

“The scientists tagged the sperm using a mildly radioactive chemical. This enabled them to demonstrate that up to 40 percent of the male’s seminal fluids flow out of the female’s genital tract and into the bloodstream.

And the longer the spines, the more of the male’s body fluids flow into the female’s blood.

Here, naturally, the sperm does not fertilize any eggs, so it points to a rather complex mechanism.

For bruchid beetles, and many other animals too, the sperm normally doesn’t travel directly to the eggs. Rather, they are kept in special pockets, from which the eggs are then fertilized.

This pocket typically contains sperm from many males, and the spines open the gates to the bloodstream for factors that make the female take more of the sperm into the sperm pocket.

If you’re wondering whether the female simply puts up with this horrific piece of genital terror, the answer is that she would, all other things being equal, certainly be better off if the male did not use his spines.

The female has also developed additional connective tissue in her genital tract, which provides partial protection. And, not surprisingly, she does her best to make the intercourse as short as possible by kicking the male.