Palo verde root borers (Derobrachus geminatus) are dark brown to black beetles in the longhorn family (Cerambycidae) that are usually 3- to 4 inches long. They look like industrial-strength cockroaches. Females are usually larger than males. They have long antennae and mandibles that can give a startling pinch. I know that from personal experience. They also have spines on the thorax. See photos from the Arizona-Sonora Desert Museum digital library here. You can see a closeup photo of spines and mandible here. 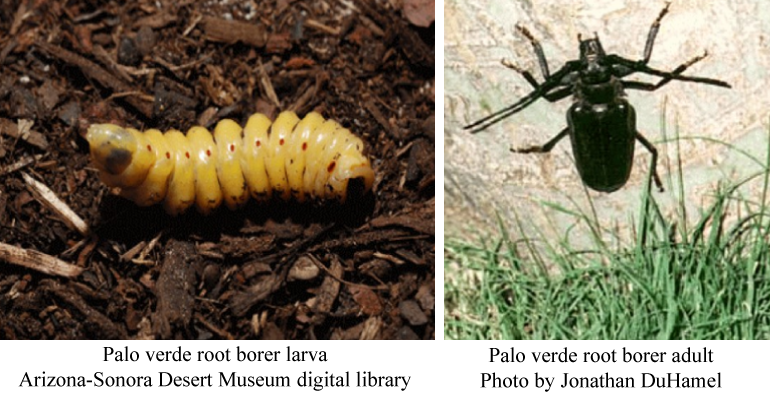 These beetles range from Southern California to Texas and into Mexico.

For most of its life (two to four years), this insect exists in larva stage as a large white grub as thick as your finger and up to five inches long. They eat tree roots and pupate within the roots. They can do much damage to trees. In Arizona, they favor Mexican palo verde trees, but occasionally attack other trees. I had one Mexican palo verde tree in my yard killed by these root borers. In New Mexico, they seem to favor mesquite trees and there they are called the “mesquite beetle.”

After pupation, the beetles emerge in adult form, generally from late June to early August. Some sources say that the short-lived adults do not feed. The Arizona-Sonora Desert Museum says the adults “may take nectar or feed on fruit.” Their only function is to mate and lay eggs in the ground near tree roots. These beetles have large wings and fly awkwardly, but mostly you will see them walking around. These beetles are generally not harmful to humans, but, as I said, they are capable of delivering a startling pinch.

Adult root borers are preyed upon by roadrunners, owls, coyotes and bobcats. The grubs are eaten by coati, skunk and possibly bears.

See a short video of an adult beetle: https://youtu.be/ibEmS3g2pXM

For more ADI articles on desert arthropods and insects see:

Carpenter Bees – black and gold and smelling like roses

The Sex Life of Bruchid Beetles